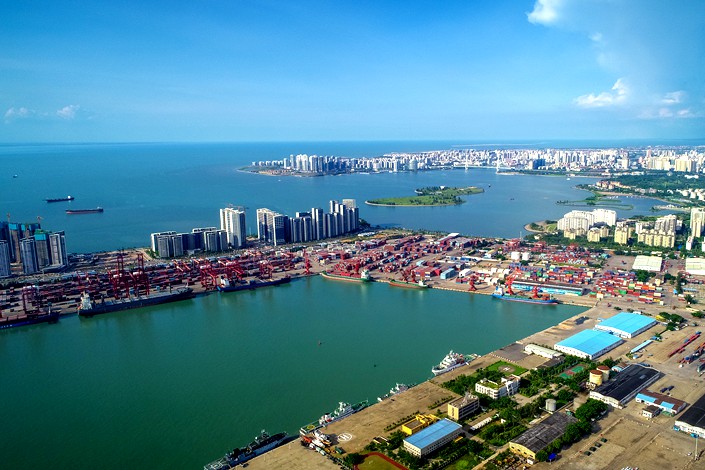 Construction of the Hainan Free Trade Port has moved into the fast lane. A scheme released in the last few days sketch out a grand blueprint for the project.

The port’s purpose is to make investment and trade freer and more convenient, supported by modern industrial systems and the orderly, safe, and expedient flow of all kinds of productive elements across borders. These all demand that we establish the operational rules for all types of market entities on the basis of systemic designs.

Consequently, systems innovation is the port’s most important mission. Rising trade volumes and investment are of course significant, but the key to the port’s success is whether it can blaze a new trail in terms of its systems.

According to plans, by 2025 the port will lay out preliminary policy systems that give priority to trade and investment freedoms. By 2035, the port’s systems and operational models will be more mature, allowing it to become a new high point in China’s open economy. By midcentury, the port will possess a relatively strong level of international influence.

Evidently, systems innovation runs through the entire process of building the port, and the project will need a long time to secure its success.

As the Chinese mainland’s first domestic free trade port, Hainan has many opportunities, but also faces no small amount of resistance and difficulty. On a global scale, Singapore, Dubai and Hong Kong are fairly mature free trade ports. Their experiences may prove useful for Hainan.

However, Hainan will eventually face unique obstacles in its systems and mechanisms. Systems innovation is the toughest question among those.

As the highest forms of openness in the contemporary world, free trade ports naturally define themselves by systemic openness. The core content of the port’s construction is how to promote systemic openness in its rules, restrictions, management and standards. The scheme gives a prominent position to systemic innovation by granting authorizations and assigning responsibilities.

If the port can draw up fairer laws and regulations and create scientific, efficient regulatory models and management systems, its construction will lead the whole country’s reform and opening up. On the other hand, local systems innovation relies on the support of national systems innovation.

We hope that building the port and deepening overall reform and opening can mutually support and reinforce each other. For example, we must retain an overall perspective when realizing the full convertibility of external loans at nonfinancial enterprises and actively participating in drawing up international rules and regulations for cross-border data flows. China’s nationwide financial opening policy and risk control systems evidently play an important supporting role exploring free trade systems.

Why must we emphasize that systemic innovation is the port’s most important mission? Because misunderstandings have circled regarding reform and development in Hainan in the last few years.

For example, many people have overly focused on the role of reducing customs tariffs. Indeed, this scheme also says Hainan will implement free systems based on “zero-tariff” characteristics when it comes to trade in goods, and makes arrangements for a large-scale relaxation of the policy of offshore island duty-free goods purchases.

Those policies might dramatically reduce transaction costs, or might be seen as sweeteners for consumers. In fact, Hainan’s offshore island duty-free purchases policy is nearly 10 years old, but due to all sorts of restrictions, it has been far less effective than its original aims. The reason is that it hasn’t touched upon the essence of the system.

There already have been several such lists in China, and Hainan should summarize the pros and cons of them. This is absolutely not a simple paper list, but requires us to establish regulatory standards that dovetail with international norms and systems. No matter whether it’s institutional configurations, regulatory levels, serviceability, or work efficiency, the port needs to make substantive changes and improvements.

In the end, systems innovation is tightly bound up with the notion of a meticulous, high-efficiency, service-oriented government based on rule of law. The scheme clearly states that “we must respond whenever problems arise, but not disturb the smooth running of things.” We find this both illustrative and heartening.

A former high financial official has predicted that Hainan’s future business environment will be even better than Silicon Valley’s. We hope the prophesy turns out to be true, but just as the governor of Hainan province has said, it is not for the government or the leadership to say whether the business environment is good; only companies can say that.

Systems innovation demands that we liberate our thinking. The scheme boldly devolves powers to local authorities, clearly requiring them to “strengthen and reform innovative thinking, grant Hainan greater decision-making power for reform, and support Hainan to strongly push for overall reform and innovation.”

At the moment, it is necessary to reheat the admonishments uttered by Deng Xiaoping, the former paramount leader of China, during his 1992 southern tour, during which he repeatedly urged officials and citizens to embrace a certain amount of calculated risk in order to spur innovation. In constructing the Hainan Free Trade Port, the less dogma we hold onto, the more beneficial it will be for systems innovation and realizing the targets outlined in the scheme.

Of course, daring to innovate and take risks doesn’t mean we mustn’t have rules or rush to achieve the desired results. Rampant smuggling and real estate bubbles have previously stymied reform and development in Hainan on several occasions. Provincial officials have repeatedly pointed to those historic lessons, and therefore, the new port must also take history as its guide.

The scheme clearly requires that the construction of the port “uphold a measured approach, consolidate at every step, make plans and arrangements for the rhythm and progress of reform, push forth projects only as they mature, and refrain from rushing to achieve quick results.” The meaning of the expression is clear to most.

Everyone knows that systems innovation is a gradual process. If we seek quick returns, we may end up taking the wrong path. In recent years, there have still been those who overtly or covertly call for Hainan to open up its gambling industry, or even its sex industry. Provincial officials must remain on guard against such temptations.

Hainan became a separate province in 1988 and transformed into China’s largest special economic zone. It carried the fervent hopes of the central government and 1 billion people on its shoulders, but in truth, its path forward was hardly smooth.

Today, Hainan once again stands at a historic turning point. However, noble ambitions are never realized with a wave of the hand. Instead of repeatedly stumbling and getting back up, it’s better to keep our feet firmly on the ground. For that, we must have solid systemic foundations.