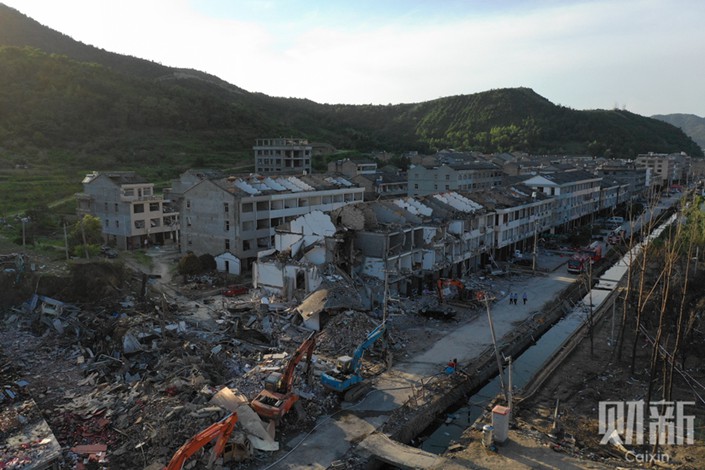 A number of residences and factories were destroyed or damaged in the blast.

A tanker truck explosion in Zhejiang province on Saturday has killed 20 and hospitalized 172 as of Monday morning, with two dozen severely injured, the local government said.

The truck, which was carrying liquefied petroleum gas, exploded on a highway near the village of Liangshan at about 4:40 p.m., sending the tanker flying through the air and into a nearby workshop, causing a second explosion, the country’s Ministry of Public Security (MPS) said in a statement (link in Chinese).

A number of residences and factories were destroyed or damaged in the blast. Helicopters and hundreds of firefighters were deployed to the scene, to search for survivors in the rubble and put out the fire on the highway and in the workshop.

A local shopkeeper told Caixin that the windows of her home had all been shattered. At first, she thought the bang she heard was a tire popping on the highway, a not uncommon sound. It was only when she saw a huge blaze and smoke rising into the sky that she realized something was seriously wrong. Another local said many of the injured were transported to a hospital in tractors.

The site of the accident is near an industrial park and is adjacent to a factory operated by ventilation-gear maker Taizhou Jiayi Electrical and Machinery Co. Ltd. The local press reported that workers were trapped in the factory by a “sea of fire.”

Search and rescue efforts had come to a close Monday morning (link in Chinese), according to the government of the county-level city of Wenling, which administers Liangshan.

China’s cabinet, the State Council, said in a Sunday statement that it would supervise the investigation into the explosion and the disaster’s aftermath. The tanker that exploded “had no contact with any vehicles” according to the initial investigation, the MPS said (link in Chinese), rebutting rumors that the explosion was caused by a rear-end collision.

The company that owned the truck, Rui'an Ruiyang Hazardous Article Transport, has been penalized 10 times over the last two and a half years for various reasons, including “failing to implement the production safety management system as stipulated,” public data shows.

The government of Taizhou, the prefecture-level city that administers Wenling, had not detected any pollution from the explosion in the air or water, said Wenling Executive Vice Mayor Zhu Minglian at a press conference Sunday. She added that the government of Wenzhou, which neighbors Taizhou, had also not discovered any such contamination.