By Zhou Dongxu and Denise Jia 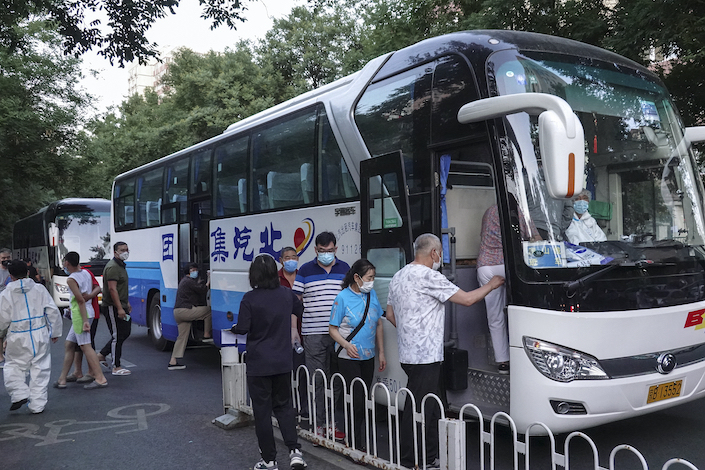 Beijing residents are transported to take Covid-19 tests after outbreak at wholesale market.

Beijing is back on alert after a new cluster of Covid-19 infections was linked to a wholesale food market that supplies 80% of the city’s meat and vegetables. After logging no new infections for nearly two months, Beijing added 79 new cases since Thursday.

The Xinfadi market in the city’s southwestern Fengtai district was shuttered after 34 new coronavirus infections were traced back to it. The virus was reportedly detected on cutting boards at vendors of imported salmon.

Nearly 100,000 community workers were dispatched to knock on doors of residents and trace about 200,000 people who were exposed to the Xinfadi market. As of Sunday, all of the more than 8,000 vendors and employees at the market were tested and transferred to central sites for medical observation. More than 20 residential complexes near the market were locked down, and 90,000 residents are undergoing nucleic acid tests, said Xu Ying, a member of the Beijing Covid-19 Pandemic Prevention and Control Leading Group.

All communities in the capital remained at the level 3 emergency response adopted June 6, indicating a major public health emergency but a notch lower than the previous level 2, for a more significant emergency. The city held at level 2 for prevention and control measures and the highest level 1 for working status, Xu said Monday at a press conference. All checkpoints have personnel on duty 24 hours a day to resume temperature screening, and all public indoor entertainment activities were suspended, Xu said.

Scientist are still trying to identify the source of the virus, but initial testing suggested that products contaminated with the Covid-19 virus entered the country from Europe, according to Yang Peng, a researcher at Beijing’s municipal disease control center.

With the market closed, Beijing has tapped a temporary vegetable reserve, increasing supply from other provinces and cities to Beijing, said Wang Hongcun, an inspector of Beijing Municipal Commerce Bureau.

The 34 Xinfadi market cases were among 36 new infections reported Sunday in Beijing. The two other cases are under epidemiological investigation, according to the Beijing Municipal Health Commission.

Health authorities warned anyone who had been to the market recently to stay home, report to community workers and have nucleic acid screening according to community arrangements. They were also urged not to take public transportation to hospitals.

Those who have not been in contact with people related to the market and who show no symptoms are advised not go to hospitals for screening, said Pang Xinghuo, deputy director of the Beijing Center for Disease Prevention and Control.