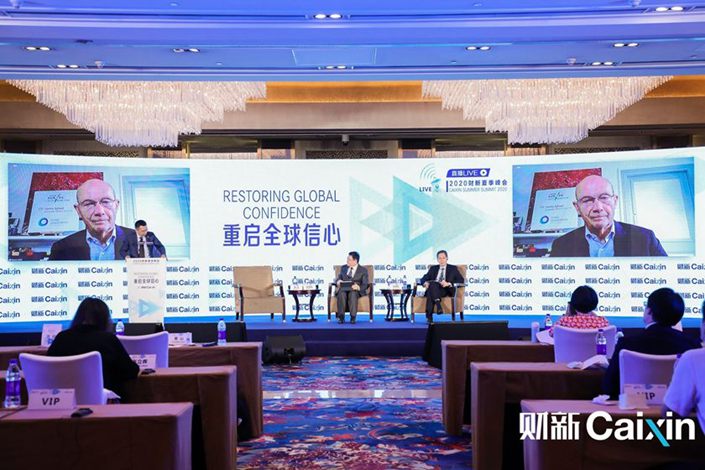 China and the European Union should conclude their bilateral investment treaty within the year in an effort to boost cross-border investment and offset the economic impact of the Covid-19 pandemic, Pascal Lamy, former director-general of the World Trade Organization said Monday.

Speaking online at a Caixin Summer Summit (link in Chinese) in Beijing, Lamy made the appeal to Chinese and EU leaders, saying “I think bilaterally, the priority is to conclude the investment treaty between the EU and China. We need this and we need this all the more now.”

Xi said the two economies should play a role as “dual engines of the world economy,” supporting a “scientific and orderly” resumption of work and production, the official Xinhua News Agency reported.

Xi also said the two sides should “accelerate negotiation of the China-EU investment agreement, strengthen cooperation in green and digital fields, and develop a partnership in green development.”

The EU leaders said the 27-country block was willing to reach an investment agreement with China at an early date. They also said the EU was ready to expand bilateral trade and push for more progress in cooperation with China in green and low-carbon development.

In an April interview with Caixin, Germany’s ambassador to China, Clemens von Goetze, also called for a “breakthrough” this year in EU-China bilateral investment treaty talks.

“China, the EU and Germany have a strong common interest to pursue the ambitious agenda we have set ourselves for this year, in particular the EU-China Comprehensive Agreement on Investment,” he said.

“Against the backdrop of the economic impact of Covid-19, a breakthrough is more urgent than ever,” he added.

At the Caixin forum, Lamy, who was also a former EU trade commissioner and president emeritus of the Paris-based Jacques Delors Insitute, suggested the two sides should join forces to support a “rapid recovery of the tourism industry,” which was heavily hit by the pandemic.

“China is a major exporter of tourists. The EU and China should prompt some sort of global discussion of a Covid-free protocol [for tourism] … so that travelers and tourists can go back to this business,” he said.

Furthermore, Lamy suggested the EU and China should also start a bilateral discussion on the issue of a carbon border tax, a proposal in which the European Commission aims to levy duties on imports from countries with weaker climate policies.

He said the EU and China should discuss how to have a bilateral arrangement based on China’s seriousness about carbon pricing and the Paris Agreement.

Currently, China is the world’s largest greenhouse gas emitter and is committed to reaching its peak carbon emission by 2030 in accordance with the United Nations’ Paris climate agreement of 2015.