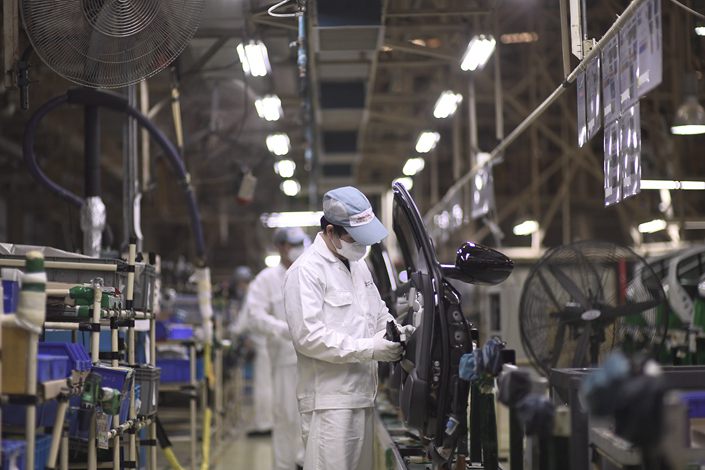 A leaked video and test results showing a GAC Honda vehicle failing a crash test but still being awarded the second-highest automotive safety rating and highest overall rating could spark a new wave of car quality concerns in China.

The Honda Breeze SUV’s front pillar, which holds the windshield in place, was severely damaged in a “25% offset frontal collision test” — a safety test that strikes the vehicle’s front corner to replicate the effect of the car hitting a narrow object like a tree or a utility pole.

Despite appearing to fail the test, the Breeze SUV received the second-highest ranking from China Insurance Automotive Safety Index (C-IASI), a rating agency set up by two automotive research institutes.

The leak included information on the agency’s safety rating decision for the Breeze SUV, and showed it was given the second-highest safety rating of “A,” and the highest overall evaluation of “G.”

Caixin has approached GAC Honda for comment. The company told a news portal run by the State Council Information Office that it would not comment until the final results are released.

Meanwhile C-IASI alleged in a statement Saturday that the test data had been “stolen,” and said it had reported the leak to the police. It said it would release its ratings for the vehicle at a later date but did not comment on the authenticity of the video.

The rating system used by C-IASI was introduced to China in 2017 and was developed by the American Insurance Institute for Highway Safety.

Zhu Wenjin, president of the Insurance Association of China at the time, said introducing a stricter testing standard could help insurance companies set a price for premiums and prevent unfair treatment for international car models in China’s auto market.

Bad test results can make or break a vehicle. C-IASI awarded its lowest safety rank last year to the SAIC Volkswagen Passat after the vehicle’s front pillar was badly smashed in a crash test. The decision caused sales to plummet last month to just one-third of other models launched by the joint venture in China.

But the same model sold in the U.S. passed its crash test, sparking speculation about the quality of components used in the vehicles intended for the Chinese market.