In Depth: Chinese Students’ Win-Win With Western Education Gets Upended

By Ingrid Luan and Wen Simin 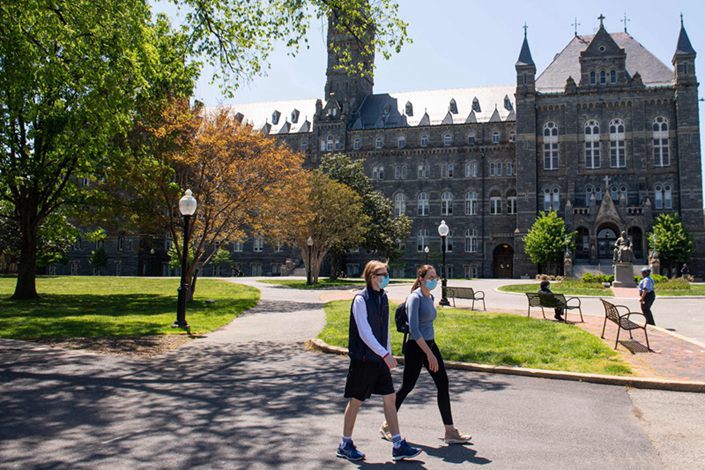 Two students walk on a university campus in Washington D.C. on May 7. Photo: Xinhua

Chinese students going abroad for university used to be a win-win.

Obtaining an overseas degree in a rich country could help the students get a big leg up in their home job market, while providing that degree gave overseas universities a steady and often lucrative revenue stream. But both are now in jeopardy as the coronavirus has swept across the world, shutting down campuses, pushing classes online and fueling anti-China sentiment, particularly in the U.S., where escalating Sino-American tensions have exacerbated the situation.

As a result, many students have had their plans for this fall upended. According to a report published in April by QS World University Ranking, 66% of Chinese student applicants surveyed in the previous two months have changed their overseas study plans amid the pandemic. That’s a big deal considering that China remains the world’s largest source of international students in the past few years. Its number of overseas students peaked at 662,100 in 2018, more than triple the figure from a decade earlier, but has since been falling, according to data from the Ministry of Education.

The anticipated plunge in foreign student enrollment this year from the pandemic could leave a big hole in the budgets of higher education institutions outside of China, especially top universities in countries popular with international students such as the U.S., the U.K. and Australia. Many universities have already been hurt by coronavirus-led financial woes and have curtailed expenses by freezing pay and shedding jobs. A further drop in revenue will only make things worse.

In an open letter dated April 21, Johns Hopkins University President Ronald Daniels said that the school estimated it would lose $375 million in the next fiscal year due to the pandemic, including $150 million from tuition and other student-related revenues. “These tremendous financial pressures are not unique to Johns Hopkins. Many of our peers are grappling with similar challenges,” he said.

In the United States, nearly 370,000 Chinese students enrolled in 2018, contributing $15 billion in tuition payments to the U.S. economy, according to the Institute of International Education. However, falling international student numbers in the next academic year are estimated to cost U.S. higher education at least $3 billion in revenue, according to a survey conducted by National Association of Foreign Student Affairs.

Colleges in the U.K. may suffer even more, as they charge significantly higher tuition fees to international students. A British undergraduate at Oxford University typically pays 9,250 pounds ($11,500) a year for tuition, while a Chinese undergraduate pays up to 36,065 pounds, more than three times as much.

British universities, reeling from the impact, will face shortfalls of 1.51 billion pounds from non-EU students, the largest decline expected in their income in the coming academic year, according to a report by University and College Union, a British trade union on higher education.

Caught in the crossfire

For students who have worked hard for years to study abroad, the public-health crisis is not the only obstacle.

Since June 1, thousands of Chinese graduate students and researchers in science, technology, engineering and math (STEM) fields have seen their visas cancelled or denied. Last month, U.S. President Donald Trump issued a proclamation suspending U.S. entry for Chinese students “with ties to Chinese military schools.” The list of affected schools was not provided.

The restriction primarily targets students who have studied at universities that “implement or support” Beijing’s so-called military-civil fusion strategy. The U.S. Department of State accused it of “acquiring and diverting the world’s cutting-edge technologies” in order to “achieve military dominance.” But Beijing said the strategy aims to benefit the public by spurring scientific progress, but doesn’t encourage theft or the diversion of foreign technology.

Ning Muyang, a senior at China’s Harbin Institute of Technology, who was thrilled when he received an offer from Michigan State University three months ago, has been left with nothing but regret after seeing Trump’s new entry restrictions. “It’s very likely my visa will be denied because I will major in electrical engineering control systems. I really regret not applying for colleges in other countries last year,” he said.

Caught in the middle of big-power politics, it was not the first time Chinese students found themselves in the crosshairs. The Trump administrations had imposed visa restrictions on Chinese students as early as June 2018. Many students have already their visas denied or screened since then.

For most students and parents, the major concern about traveling abroad is still safety, as the coronavirus has killed 477,000 and infected 9.2 million around the world, according to the latest tally by Johns Hopkins University.

Zhang Yaoyao, a 22-year-old with a conditional offer from Glasgow University, has decided to stay in China and look for a job instead. She had been worried about the “herd immunity” policy that British government initially adopted. “After all, life safety is the most valuable thing,” she said.

The pandemic has also fueled the anti-Chinese sentiment that has emerged since the virus first appeared in the city of Wuhan late last year. China’s Ministry of Education warned Chinese students of the dangers in Australia earlier this month, citing the increasing discrimination and racist attacks against people of Asian descent.

The Asian Pacific Policy and Planning Council, in the United States, had documented nearly 1,900 incidents of anti-Asian discrimination across the country from the start of the pandemic through May 13, of which roughly 502 incidents specifically mentioned the terms “China” or “Chinese.”

In the post-pandemic era, the change of landscape in overseas study still depends on the competitiveness of a nation’s educational system. As long as there is a gap in educational resources between China and the West, the demand for studying abroad will remain, said Xiong Bingqi, deputy director of the 21st Century Education Research Institute.