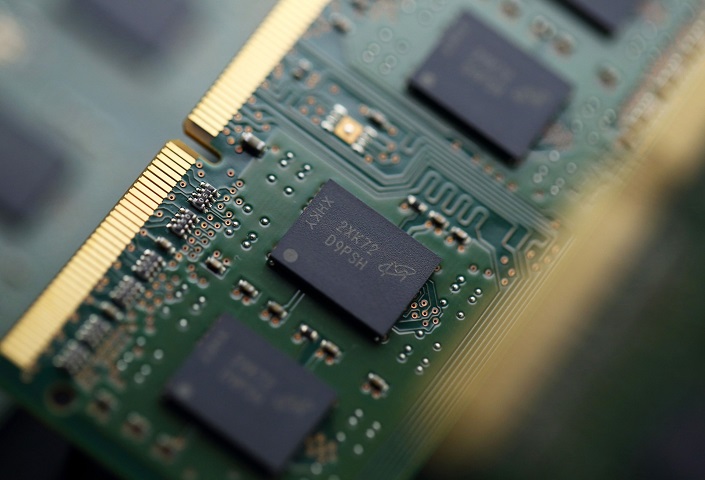 (Bloomberg) ― The U.S. won arrest warrants for the former president of a China state-owned chipmaker and two other engineers charged with stealing secrets from Idaho-based Micron Technology Inc.

The effort to apprehend the three men is notable because they were charged in 2018 in the first case filed under the Trump administration’s “China Initiative” targeting trade-secret theft, hacking and economic espionage. A federal magistrate judge in San Francisco issued the warrants Wednesday after the three men failed to show for their arraignments.

While the prosecution of Fujian Jinhua Integrated Circuit Co. has hobbled China’s aspirations of mass producing memory chips, the case has crawled along, even as the Justice Department said the China Initiative would prioritize rapid action. The arraignments of the engineers were repeatedly postponed by agreement between the U.S. and their lawyers. Suddenly on Wednesday, in a three-minute hearing, a U.S. prosecutor requested the warrants, telling the judge she knew the defendants wouldn’t show up after talking to their lawyers Monday.

“Their clients are not here for different reasons,” Assistant U.S. Attorney Laura Vartain Horn told the judge, without offering details. “The appropriate thing to do, and what the government requests, is a warrant for each of the individual defendants.”

After the Justice Department billed the matter as a banner prosecution under a special initiative, there may be “political pressure to do something about this case and chalk up a win,” said Calvin Lee, a white-collar criminal defense lawyer.

Beyond appearances, the U.S. also has a responsibility to pursue the accused engineers, said Preston L. Pugh, a former prosecutor who works with Lee.

The warrants were issued for former Fujian Jinhua president Chen Zhengkun, or Stephen Chen; He Jianting, or J.T. Ho; and Wang Yungming, or Kenny Wang. All three are from Taiwan, and legal experts have said there’s little motivation for them to appear in a U.S. court.

Ho and Wang, who previously worked for Micron before moving to UMC, and a third UMC staffer were found guilty by a Taiwanese court two weeks ago of theft or assisting in the alleged theft of Micron’s secrets. The three men were sentenced to jail for periods ranging from 4 1/2 to 6 1/2 years and fined between NT$4 million and NT$6 million. The court also fined UMC NT$100 million ($3.4 million).

Mary McNamara, a lawyer for Chen, didn’t immediately respond to requests for comment. Vanessa Chuang, who represents Wang in Taiwan, declined to comment as she said she doesn’t represent Wang in the U.S. Of the three, only Ho is still working for UMC. A call to the law firm that was listed two years ago in the indictment as representing Ho wasn’t answered.

In October 2018, a few days before the China Initiative was announced, the Commerce Department blocked sales of U.S. chip-making gear to Jinhua, grinding to a halt the company’s plans to produce semiconductors. China, by far the largest market for dynamic random access memory, or DRAM, has made its production a national priority so it can end its reliance on hundreds of billions of dollars of annual imports.

From the criminal case, prosecutors stand to win an order requiring Jinhua and UMC to forfeit chips and income derived from technology allegedly stolen from Micron, as well as a ban on using Micron’s secrets for as long as five years.