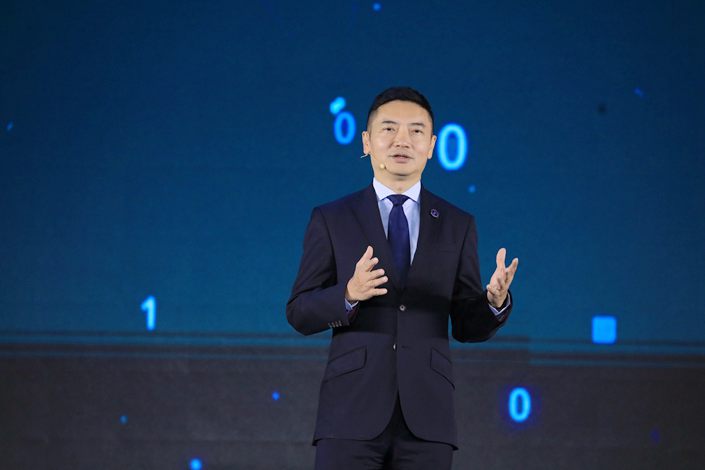 Back in mid-2017, Simon Segars, CEO of British chip designer Arm Ltd., led a team to China. On May 14, he presided over a high-profile event where his company, one of the world’s top makers of smartphone chip technology, signed a deal with a local investment group. That would lay the foundation for establishment of an independent China unit the next year.

The launch of Arm Technology (China) Co. was seen as a major step for the parent company’s expansion in China, where most of the world’s smartphones are manufactured by the likes of Huawei Technologies, Apple and a host of local players like Xiaomi and Oppo.

But just two years after its inception, the venture has been thrown into a state of crisis as a high-profile battle for control emerges between its shareholders and an ambitious and defiant CEO. The British Arm announced earlier this month that it was removing Allen Wu as CEO of Arm China, only to see Wu refuse to quit and mobilize his staff in his support.

While intriguing on the surface due to its sensitive high-tech element, Arm’s blow-up with its China offspring is actually a more mundane tale of clashing styles between East and West. That clash ultimately culminated in the final confrontation when Arm accused its China chief of conflicts of interest — allegations Arm China has denied.

As Arm’s only legal entity allowed to authorize use of its intellectual property in China, Arm China has considerable local influence and any uncertainty around its fate would have major ramification for a wide range of local companies dependent on that technology. Arm’s intellectual property (IP) dominates the world’s mobile chips, supplying designs for effectively all of the world’s chip users and manufacturers.

Arm China’s establishment two years ago was one in a series of similar tie-ups at the time between leading global high-tech companies and local partners when China and the U.S. had yet to start their high-profile rivalry for leadership in key technologies.

In 2016 alone, Microsoft, Cisco and Hewlett Packard were among at least eight global tech companies to establish similar Chinese joint ventures. Their motivation was at least partly political, as Beijing began requiring such tie-ups as a condition for bidding for lucrative contracts from government agencies and big state-owned enterprises due to national security concerns.

Arm discussed setting up a Chinese venture as early as 2015. Like many of the other tech firms racing to set up joint ventures at that time, Arm worried about missing out on the growing Chinese market if it didn’t have a joint venture.

“Establishing a China venture will make our clients believe that our technology is locally developed, and is thus safe to use,” Segars told Caixin in an interview during his 2017 China trip.

Japan’s Softbank, which acquired Arm in 2016 in a $31 billion deal, facilitated the process. It gained $775 million after selling a majority 51% stake in Arm’s Chinese joint venture to a consortium led by local investment group Hopu Investment.

Though Arm retained only 49%, the agreement entitled the British company to 90% of sales for any of the venture’s non-China developed products, according to the sources familiar with the venture’s history. Also, Arm would be the exclusive licensee of any product developed by Arm China outside of China. Arm has said about 20% of its global revenues come from China.

Allen Wu, who stands at the center of the current face-off, was another major force pushing for Arm China’s establishment. He joined Arm in 2004 and was eventually promoted to head the company’s China operation in 2009 after steering impressive China sales during the two prior years.

Wu was moved onto Arm’s global executive committee in 2014, and has since advocated setting up an independent business to supercharge the company’s growth in China, one of the sources familiar with the venture’s history said.

Several former employees who have dealt with Wu described him as ambitious and sometimes defiant. His selection as Arm China’s CEO at its formation didn’t mean Arm strongly favored of him, they added.

Wu’s relationship with Arm board members at its U.K headquarters was already strained in the years running up to his appointment as the China joint venture’s CEO, people familiar with the matter said.

Arm board members didn’t like that Wu often made daily operational decisions without their consent, they said. Others saw such a management style as necessary in the fiercely competitive Chinese market, and business experts often point out that many failed China joint ventures were hobbled by home offices trying to exercise too much control.

Discontent towards Wu grew stronger as he tightened his grip after being named CEO of Arm China. The venture released an artificial intelligence (AI) platform called Zhouyi in November 2018, which Wu said would be able to provide AI computing power to hundreds of billions of “internet of things” (IoT) devices of the future.

Zhouyi was developed based on an existing Arm product. But after some major modifications and further development, Wu promoted it as being designed and developed by Arm China, according to a source familiar with the matter. That led the parent Arm to dispute the ownership of the product with the team at Arm China, the source said.

Arm’s discontent reached a climax at the end of last year, when it received complaints from whistleblowers accusing Wu of secretly setting up a U.S. dollar fund called Alphatecture that invested in Chinese startups, creating potential conflicts of interest. Arm has since launched an investigation related to the matter, Caixin has learned.

Wu has also been accused of lying about the nature of the fund after allegedly telling clients and investors it had gotten the nod from Arm China’s board and Softbank, according to a source familiar with the investigation.

Alphatecture had invested in at least two Chinese startups. One, a company called Bestechnic that designs chips used in devices such as headsets and smart speakers, is currently eying a Shanghai listing. Since 2015 it has procured IP from Arm China, including 25 million yuan ($3.5 million) worth last year, according to an IPO document it filed to the Shanghai Stock Exchange earlier this year.

The investigation related to the fund lasted about six months and was completed by last month, Caixin learned. Arm notified Wu that he was being suspended from his duties on June 1. Three days later, Arm China’s board voted seven-to-one to force him to leave, several people close to Arm China told Caixin.

Arm released a public statement on June 10 saying the board of Arm China agreed to remove Wu as its chairman and CEO, and appointed Ken Phua and Phil Tang as interim co-CEOs.

A tense standoff followed as Wu refused to be forced out and Arm China issued a message on its official WeChat social media account hours later saying Wu was still in charge and the venture was operating normally.

The parent fired back in a joint statement with Hopu accusing Wu of conflicts of interest and violations of employee rules, an apparent reference to the Alphatecture fund. Arm China responded by calling the allegations groundless.

Wu issued a statement on June 15 revealing that 12 of his employees had signed their names to a petition in his support. But throughout, the Hopu-led consortium stood by Arm’s side in support of Wu’s removal.

The Chinese consortium had little choice but to support Arm in the matter, despite China’s recent efforts to develop its own chip industry, observers said. At the end of the day Arm China is still largely a sales unit whose existence is highly dependent on its British parent. With about 600 staff, Arm China currently owns three self-developed technologies, a tiny fraction of the more than 1,000 such technologies held by its parent, which employs more than 6,000 people.

The matter remains deadlocked at the moment, because Wu still physically controls Arm China’s corporate seal, known locally as a chop, which allows him to block any registration changes.

A source close to Arm told Caixin the board decided to remove Wu even though it knew his control of the Arm China chop presented a risk. “Unfortunately, this is the reality in China,” said the source.