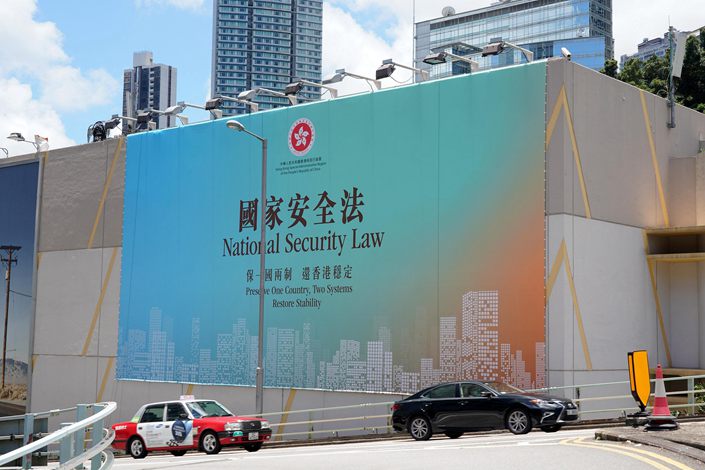 A public service advertisement supporting national security law hangs on the wall of a building on Cotton Tree Drive in Hong Kong, June 11.

The Chinese legislature’s top decision-making body has passed and enacted national security legislation for Hong Kong, a major legal effort to restore stability in the special administrative region, which has been embroiled in about a year of social unrest.

The legislation has been listed in the territory’s mini-constitution, the Basic Law, for application in the city and will come into effect later on Tuesday, according to a statement released by Hong Kong Chief Executive Carrie Lam.

The Hong Kong government will establish a national security committee, chaired by the city’s chief executive, as soon as possible, the statement said.

Dedicated units of the Hong Kong Police Force and the semi-autonomous city’s Department of Justice will be responsible for implementing the relevant legal provisions in the National Security Law, according to the statement.

The legislation consists of 66 articles in six chapters that aim to prevent, curb and punish acts of secession, subversion of state power, terrorist activities, and colluding with foreign or external forces to endanger national security, Xinhua reported.

The swift passage of the legislation came two days after the NPC’s standing committee held the second reading of the draft bill on Sunday. It came a day ahead of Wednesday’s 23rd anniversary of the U.K.’s handover of Hong Kong to China on July 1, 1997.

The committee began drafting the law after a legislative proposal was approved by the NPC during its annual session in late May.

Hours before the vote in Beijing on Tuesday morning, the U.S. began eliminating its preferential treatment of Hong Kong as a separate tariff zone, a move which China vowed to fight.

U.S. Commerce Secretary Wilbur Ross said in a statement that “Commerce Department regulations affording preferential treatment to Hong Kong over China, including the availability of export license exceptions, are suspended.”

The measure would block Hong Kong’s access to “sensitive U.S. technology” that Washington suspects could be “diverted to the People’s Liberation Army or Ministry of State Security,” according to the statement.

“Those are risks the U.S. refuses to accept and have resulted in the revocation of Hong Kong’s special status,” Ross said. “Further actions to eliminate differential treatment are also being evaluated.”

Echoing Ross, U.S. Secretary of State Mike Pompeo also said that effective Monday, Washington was ending exports of defense equipment to Hong Kong and would take steps to end the export to the territory of technologies that have both commercial and military uses.

“The United States is forced to take this action to protect U.S. national security. We can no longer distinguish between the export of controlled items to Hong Kong or to mainland China,” Pompeo was quoted by Reuters as saying.

In response to the U.S. sanctions, Zhao Lijian, a spokesperson for the Chinese foreign ministry, vowed to fight back with “necessary countermeasures.”

“China will not be intimidated by the U.S. attempts to obstruct it advancing the Hong Kong national security legislation,” Zhao said in a press conference Tuesday.

When asked about the U.S.’ move during a press conference in Hong Kong, Lam said that foreign government sanctions “will not scare Hong Kong” and the city’s government will fully cooperate with Beijing on any countermeasures.

In a video address to the United Nations Human Rights Council on Tuesday, Lam continued to defend the enactment of the national security law in the city, saying that the “legislation to safeguard national security is now urgently needed” due to “escalating violence fanned by external forces.”

She said that those national security crimes will be “clearly defined” in the law and it will only target an “extremely small minority of people” who have breached the law.

“The legislation upholds important legal principles such as presumption of innocence and protection of the rights of the suspect,” she continued, “It will have no retrospective effect.”

Tam Yiu-chung, the sole member from Hong Kong at the NPC standing committee, was also quoted by Hong Kong public broadcaster RTHK as saying that there would be three types of “rare situations” when those accused of national security offenses would be dealt with by mainland courts. Tam did not elaborate.

The text of the legislation is expected to be released late Tuesday Beijing time.