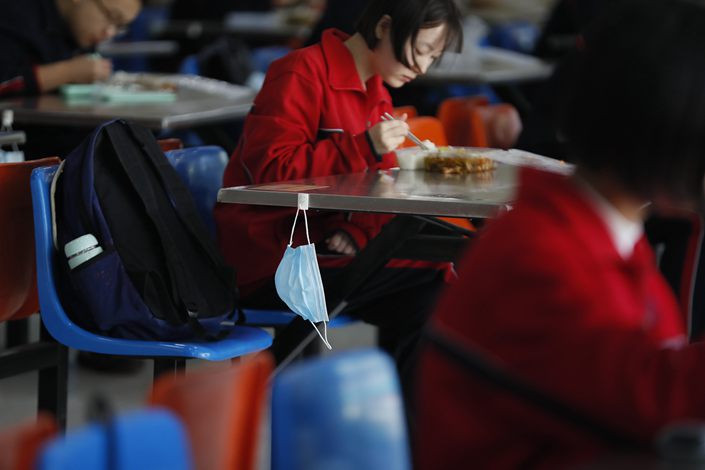 Students eat at a school in Shijiazhuang, capital of North China's Hebei province, on April 23.

A total of 46 people have been punished for their involvement in two impostor scandals in East China’s Shandong province that involved life-altering identity thefts for college admission, local authorities reported Monday.

Chen Chunxiu, the daughter of a low-income family, was first to expose the scam after she discovered she had been admitted to her dream school, Shandong University of Technology (SDUT), 16 years ago, but her place was taken by an impostor from the same county.

Denied admission to college, Chen found jobs as a factory worker, waitress and kindergarten teacher, living with the thought that she had failed the national college entrance exam.

Chinese media have exposed a total of 242 cases of impostors discovered during internal checks of Shandong universities between 2018 and 2019. The degrees conferred to the imposters have been revoked.

The local discipline inspection taskforce probing the cases said they were still under investigation, but the identity thefts mainly occurred between 1999 and 2006.

China’s top legislature, the Standing Committee of the National People’s Congress, has proposed adding to the imposters’ punishments in an amendment to the Criminal Law that will guard people’s “safety of future,” state-owned China News Service reported on Tuesday.

But Chen’s case was only the tip of the impostor iceberg in Shandong.

Another woman, Wang Lili, recently reported a similar case where her identity and college admission was stolen 24 years ago. A total of 21 people have been punished for the theft.

And still awaiting justice is Gou Jing who has claimed her identity was stolen in two consecutive years, 1997 and 1998, once by her principal’s daughter. Gou said she didn’t realize the truth until 2002, and her head teacher sent her “a letter of apology” a year later, begging for forgiveness.

The impostor who took Chen’s identity has been suspended from her job and her SDUT diploma details have been permanently deleted.

The public security bureau has filed cases and taken compulsory measures against both the impostor and her father, a businessman who owns a local company and plotted the scam in 2004. The impostor had claimed her aunt spent 2,000 yuan ($282) to buy Chen’s identity.

The impostor’s uncle, then head of the township, and the then director of admissions for the county, are alleged to have helped steal Chen’s identity and are also under investigation.

Another 25 people involved in the case, including the local police chief, high school principal and officials at SDUT, have received Communist Party warnings, been demoted or had their pensions cut, said the government statement (link in Chinese).

“Everyone involved was punished, but the girl’s life has already been ruined,” said Chen’s relative after hearing about the punishments.

As Chen took various jobs in the intervening years, the impostor worked for a county community office after four years of college.

But Chen never gave up her dream of entering college. She discovered her identity had been stolen when she was filling in forms for an adult education school to which she received an offer. She hopes to be admitted into SDUT again, and the school said it would try to help her achieve this.

China’s “gaokao,” the annual national college entrance examination, is considered by many students from low-income families as almost the only and most reliable way to change their destiny. But many families from rural areas cannot afford to wait another year to try again in the annual exam.