By Matthew Walsh and Qin Jianhang 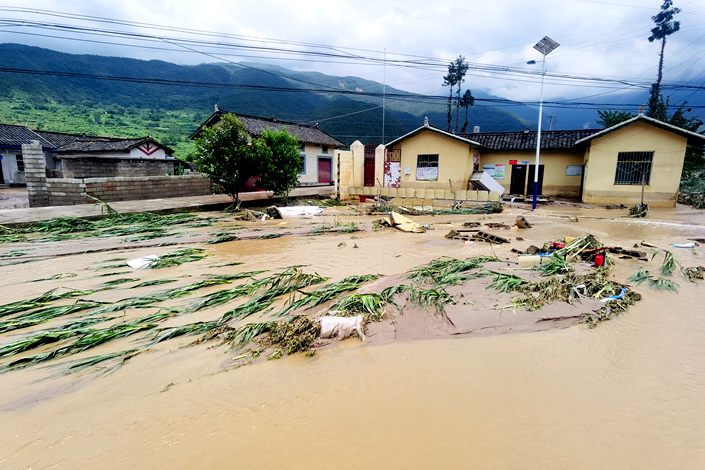 Severe rainfall warnings were in place across swaths of China on every day in June except one, an extremely rare occurrence that comes as the country experiences some of its worst flooding in decades and experts sound the alarm on climate change.

Some 78 people have died or gone missing in floods during the past month, according to statistics published Sunday by the Ministry of Emergency Management. Over 7 million people have been forced to evacuate and more than 8,000 buildings have been destroyed, with southern provinces particularly badly affected.

The deluges had caused 25.7 billion yuan ($3.6 billion) in direct economic losses as of Sunday, the ministry said, making them one of the year’s most destructive global natural disasters. China has earmarked 150 million yuan to aid relief work in three of its worst-affected provinces.

Flooding is common in China during the early summer, when so-called “plum rains” blow in from the Pacific and settle across the country’s south and east. But the scale and severity of this year’s rain have meteorologists rifling through the record books.

Last week, parts of the southwestern metropolis of Chongqing recorded their worst floods since at least 1998. The city, whose built-up area lies on the banks of the Yangtze River and has a population of 18 million, saw water levels in some places rise more than 5 meters (16.4 feet) above the flood line.

More recently, government officials in Mianning, a mountainous, impoverished county in southwestern Sichuan province, on Sunday announced that 12 people had died and 10 remained unaccounted for since the onset of severe rainfall patterns at the beginning of June.

Also on Sunday, a young boy was swallowed by floodwaters in the eastern city of Fuyang. Emergency workers launched a rescue attempt, but he was pronounced dead at the scene.

Heavy rain warnings remained in effect Tuesday, with the weather office predicting (link in Chinese) that 100 millimeters (3.9 inches) to 140 millimeters could fall across the country from landlocked Yunnan in the far southwest to coastal Zhejiang in the east.

On Monday, the Three Gorges Dam — the Yangtze-spanning barrier that is the world’s largest power station by installed capacity — opened its sluice gates for the first time this year in order to bring down water levels in its swollen reservoir.

The emergency management ministry’s damages tally would make China’s floods the second-most-expensive global weather disaster of the year so far, according to the nonpartisan environment group Yale Climate Connections, citing data from insurance broker Aon. The priciest was Cyclone Amphan, which wrought $15 billion in damages across South Asia in May.

Heavy rains consisting of more than 50 millimeters of daily precipitation increased in frequency in China by more than 20% between 1961 and 2018, he said.

“There is an urgent need to strengthen early warning systems for extreme weather events, to assess future climate risks in cities, and to improve flood management systems,” Liu said. “As the climate crisis intensifies, we must do all that we can to avoid the worst impacts, which means taking action now to both end our reliance on fossil fuels and to prepare for more extreme weather.”