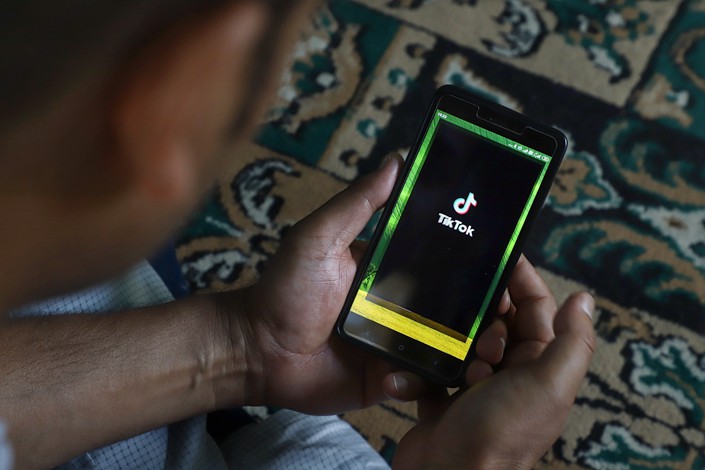 A man in India opens the TikTok app on Tuesday.

Chinese tech unicorn ByteDance Ltd., owner of the hugely popular short video app TikTok, is anticipating a loss of more than $6 billion after three of its apps were banned in India early this week, sources close to the company’s senior management told Caixin Wednesday.

That amount is most likely more than the combined losses for all the other Chinese companies behind the other 58 apps banned in India, the sources said.

ByteDance became one of China’s latest homegrown technology companies to run into growing resistance from foreign governments wary of perceived ties to Beijing and concerned about protecting user data.

On Monday, India announced an unprecedented ban on national security grounds on the use of 59 China-developed apps in the domestic market.

It was a response to the escalating strained relations between China and India after a border clash in the Himalayas left 20 Indian soldiers dead. Chinese casualties from the clash have not been disclosed.

The ByteDance apps banned were its short video platforms TikTok and Vigo Video, as well as its social networking app Helo. Tencent’s messaging platform WeChat and five of its other apps were also on the hit list. Other big tech China firms, including Alibaba Group Holding Ltd. and Baidu Inc., also had popular products banned.

All the 59 apps have now been removed from Apple Inc. and Google LLC’s app stores for the Indian market, Caixin has learned.

The ban is a huge blow to the global expansion of TikTok, which is touted as the most popular Chinese app overseas. India is its largest market in terms of users outside China, where the service is called Douyin.

The app was downloaded in India 611 million times in this year’s first quarter, equating to 30.3% of its total downloads worldwide in the quarter and nearly double the total number of India downloads for all of 2019, according to SensorTower.

It is not the first time that TikTok had been targeted by Indian regulators. In early 2019, they temporarily removed it from app stores over concerns it was addictive to teenagers. Later that year it also faced accusations that it was inappropriately collecting user data.

TikTok said in a statement responding to the Indian government’s move that the company would fully comply with its ruling. It said it didn’t share information with any government, including the Chinese government.

“We have been invited to meet with concerned government stakeholders for an opportunity to respond and submit clarifications,” the company said.

ByteDance employs over 2,000 full-time local staff in India. In April 2019, in response to a previous setback from local regulators, the company announced it would invest $1 billion in the country over the next three months.

Mo Yelin and Yang Ge contributed to this report.