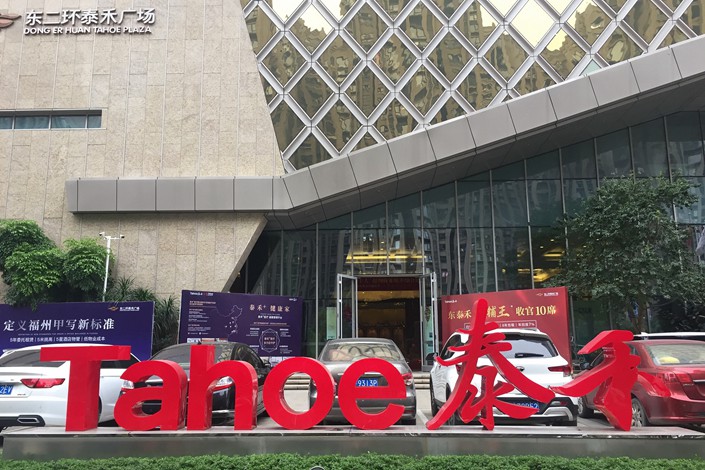 Debt-laden luxury villa developer Tahoe Group Co. Ltd. failed to repay a 1.5 billion yuan ($214 million) bond that matured on Monday, taking its total overdue borrowings to 27.1 billion yuan. The default underscores the growing financial stress on cash-strapped home builders hit by the double whammy of a slowing economy and the fallout from the coronavirus pandemic.

The Fujian province-based developer, which reported a net loss of 402 million yuan in 2019, failed to raise funds to repay the three-year medium-term note, and interest of 112.5 million yuan, according to a filing to the Shenzhen Stock Exchange on Tuesday. The company also disclosed that it has a total of 55.5 billion yuan of debt maturing this year, but has only repaid 4.8 billion yuan so far and managed to extend the repayment period for another 6.2 billion yuan of debt due in the first half of the year.

Tahoe Group, which is 49% owned by Tahoe Investment Group Co. Ltd. and chaired by its founder Huang Qisen, is coordinating with the underwriters of the medium-term note to hold meetings with bondholders, according to another Tuesday filing (link in Chinese), although no further details were provided.

The People’s Bank of China, China Securities Regulatory Commission and National Development and Reform Commission issued a joint statement (link in Chinese) on July 1 calling on companies to hold talks with bondholders about voluntary debt restructuring to try and avoid formal defaults.

Tahoe Group also said it has hired advisers to help with debt restructuring and is considering selling off property assets to raise money. The statement reiterated that the company is looking to bring in new strategic investors.

The company is facing mounting losses amid declining sales and rising interest payments, and disclosed its debt obligations in response to queries from the Shenzhen exchange about its 2019 annual report (link in Chinese) released in June. The report showed the company was struggling even before the coronavirus outbreak — it swung to a net loss of 1.9 billion yuan in the fourth quarter from a net profit of 627 million yuan in the same period in 2018 (link in Chinese) and in the first quarter of this year it made a loss of 542 million yuan. At the end of March, the company said it had total assets of 223.4 billion yuan and liabilities of 190 billion yuan.

Like many property developers, Tahoe Group was restricted from borrowing from banks as part of the government’s long-standing policy of controlling the real estate market. Most of its debt was raised from nonbank financial institutions or from bond sales, including offshore bonds, usually at far higher interest rates. The medium-term note now overdue carried a coupon of 7.5%, compared with the average bank lending rate for corporates in March of 4.82%.

Among Tahoe Group’s debt maturing this year, bank loans account for only 12.35%, while loans from trust firms make up 46.64% and those from asset management companies 24.8%, according to the filing.

Tahoe Group started to default on its borrowings last year. In Tuesday’s filing, the company said it had failed to repay debt raised from banks, trust firms, asset management companies and funds as well as bond sales.

The growing risks attached to Tahoe Group’s bonds and its ability to refinance its debt prompted Fitch Ratings to cut the company’s long-term foreign currency issuer rating twice in three days in May, first from B- to CCC+ on May 11 and then to CC on May 14, dropping deeper into junk bond territory.

Fitch said Tahoe has $840.5 million of offshore debt due over the next 12 months and warned that its refinancing plans “may face material execution risks due to the current low market prices of its bonds.”