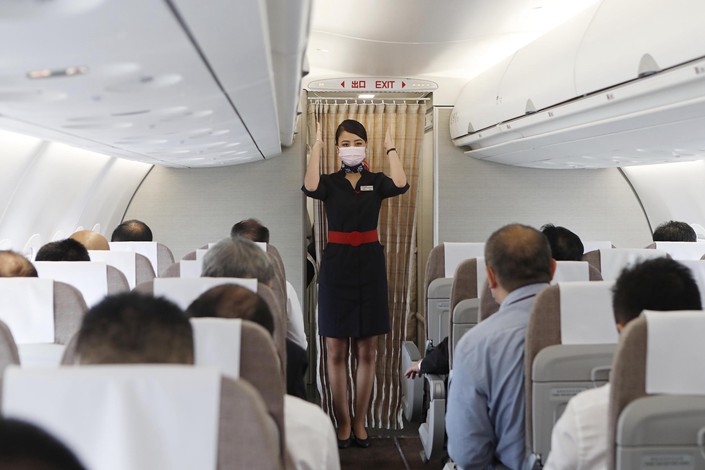 The airlines’ promotional efforts are motivated by the subdued demand being experienced by the global aviation industry because of Covid-19.

Chinese airlines are ramping up their offers of creative discount packages with unlimited flights and free upgrades to boost pre-sales and to ease cash crises as travel picks up from the coronavirus downturn.

The announcement came one day after Hainan Airlines Holding Co. Ltd. generated 30 million yuan ($4.3 million) by selling 10,000 discounted packages priced at 2,999 yuan each, that offer passengers unlimited numbers of domestic flights in the second half of this year.

One analyst, however, described the promotions as “just a workaround.”

Zeng Fanzhe, a transport analyst at TF Securities, said deepening discounts could stimulate some short-term demand for air travel, but won’t be a lasting measure to help airlines replenish their cash flow.

Lei Zheng, head of the Institute for Aviation Research think-tank, said the innovative promotions were designed to boost revenue amid the post-virus “new normal” and were distinct from traditional rescue strategies such as applying for loans.

He suggested Chinese airlines could learn from their U.S. rival United Airlines Inc. which mortgaged its frequent-flier program to get a $5 billion loan. This is a sustainable option and could raise more funds without creating potential price competition, he added.

The airlines’ promotional efforts are motivated by the subdued demand being experienced by the global aviation industry because of Covid-19.

China’s aviation sector has lost nearly 40 billion yuan cumulatively in the first quarter, 84.5% of it attributable to airline companies, according to the Civil Aviation Administration of China.

Operational issues have emerged as travelers start to use air travel again in China. Some passengers have complained about flight cancellation disruptions on weekends and slow refund procedures.