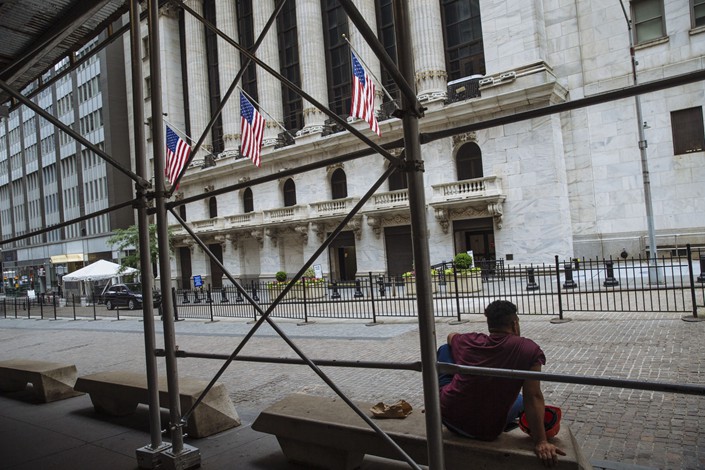 A person sits on a bench outside the New York Stock Exchange (NYSE) in New York, U.S., on Wednesday, June 24, 2020. Photo: Bloomberg

(Bloomberg) — Vanguard Group Inc., the New York Stock Exchange and Nasdaq Inc. are pushing back on an escalating risk to their bottom lines: threats from Capitol Hill and the Trump administration to dramatically curtail U.S. investments in Chinese companies.

During a Thursday panel discussion hosted by the Securities and Exchange Commission, the firms’ executives questioned a bill under consideration in Washington that could lead to Alibaba Group Holding Ltd., Baidu Inc. and other Chinese businesses getting kicked out of American stock markets. The intent of the legislation is to force China to comply with U.S. accounting rules. But among the concerns raised was that it might just prompt companies to relocate to markets with less regulatory oversight.

“Companies will likely move their listings,” said Rodney Comegys, a principal at Vanguard. “They’ll move their place from New York to Hong Kong.”

The remarks are notable because Wall Street — hesitant to get in the middle of rising tensions between the U.S. and Beijing — has been mostly quiet about Washington’s potential crackdown on Chinese companies.

The bill in question cleared the Senate unanimously in May with a companion version now being reviewed by the House. It would trigger the de-listing of Chinese firms if they don’t allow their books to be examined by the U.S. Public Company Accounting Oversight Board (PCAOB) for three straight years. The legislation’s Republican and Democratic backers says it’s needed to protect U.S. investors from fraud.

The Thursday event also featured SEC staff and executives from major accounting firms. It’s not expected to result in swift policy changes as most regulations take months or even years to enact.

Vanguard is among giant money managers whose mutual funds invest in Chinese businesses listed on U.S. exchanges, while NYSE and Nasdaq make millions of dollars in fees by allowing Chinese shares to be traded on their platforms.

John Tuttle, chief commercial officer for NYSE Group Inc., said the exchange would support adding an indicator to company tickers to ensure investors are aware of risks associated with firms whose audits aren’t inspected by the PCAOB. But he warned that the proposed legislation could backfire.

While he was careful to say that Nasdaq wasn’t opposing the pending bill, John Zecca, the exchange operator’s global chief legal and regulatory officer, was also critical.

“Legislation is a very blunt tool,” he said. “The government already has a number of tools to address this.”

The issue of Chinese stock listings has attracted the attention of President Donald Trump, who has ratcheted up his attacks on China over the coronavirus pandemic and as friction mounts due to Beijing’s recent moves that chip away at Hong Kong’s political freedoms.

Trump has ordered regulators to review Chinese companies’ lack of adherence to U.S. accounting rules and submit recommendations by early August on how to fix the problem, putting the SEC at the center of the fight. The president’s critiques come as slumping poll numbers show he faces a difficult road to winning re-election in November.

Adding urgency to the debate over Chinese companies is this year’s high-profile accounting scandal at Luckin Coffee Inc. Since reaching a high of $50 a share in January, the Chinese chain has cratered more than 90% in Nasdaq trading, a plunge that’s erased about $11 billion of market value. Following an internal investigation, Luckin disclosed earlier this month that fabricated transactions had inflated its 2019 revenue by about $300 million.

SEC Chairman Jay Clayton has said he supports the legislation because denying access to PCAOB examiners creates an “unlevel playing field” for U.S. investors. Clayton, in remarks prepared for Thursday’s event, said he expected the panelists’ comments to inform recommendations that regulators are preparing for Trump.

The longstanding requirement that all companies that trade on U.S. exchanges submit their audits for PCAOB inspections was implemented in the wake of Enron Corp.’s 2001 accounting scandal. There are more than 200 Chinese corporations that have been allowed to sell shares in the U.S. without complying, according to the PCAOB. Their market capitalization is roughly $1.8 trillion, with Alibaba making up about one-third of the total.

Famous short seller Carson Block was among Thursday’s panelists who said the U.S. needs to do much more to prevent fraudulent Chinese companies from ripping off American investors.