Singapore’s PAP Retains Power but Has Weakest Showing Ever 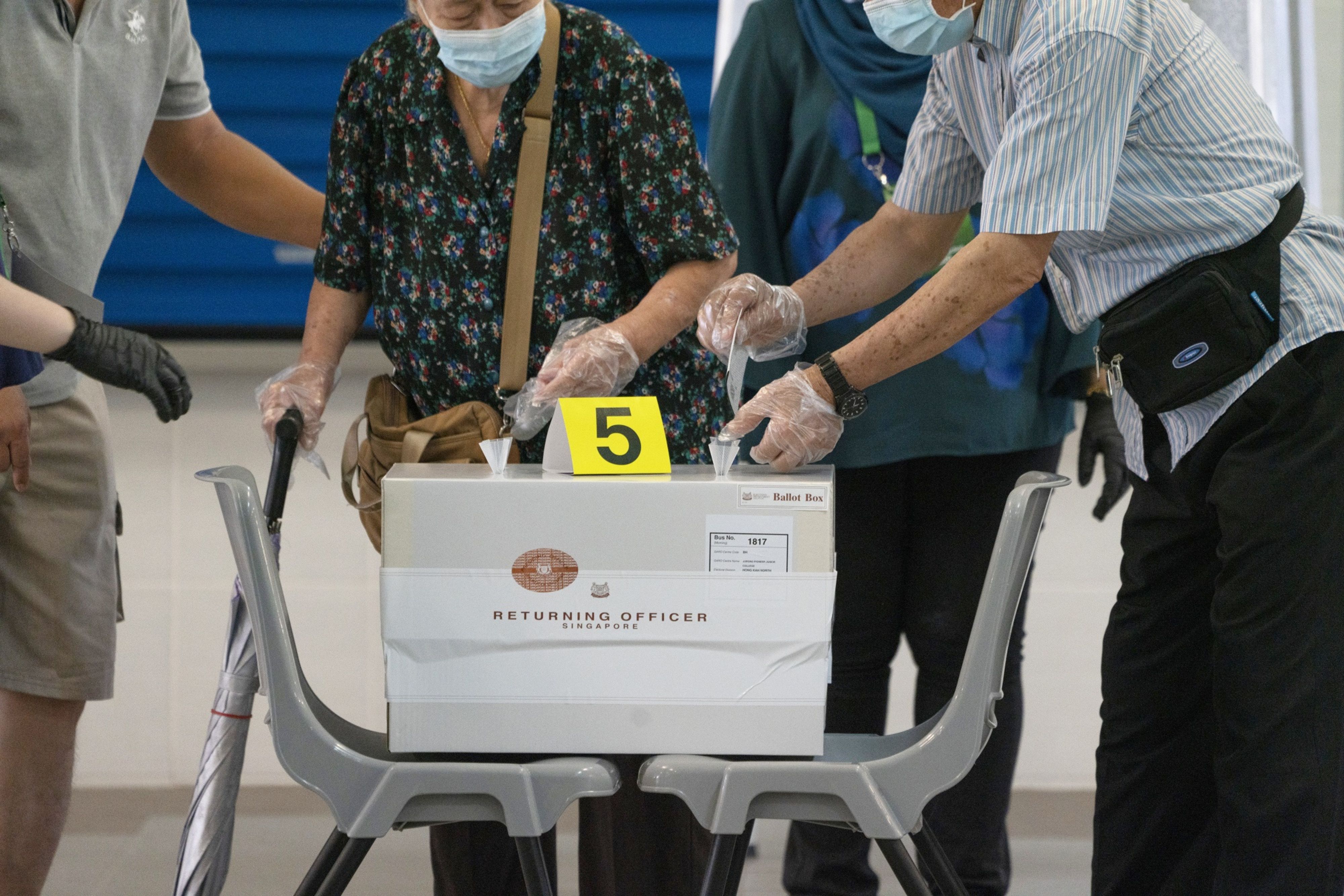 A voter wearing a protective mask and gloves is assisted to place her vote slip into a ballot box during the Early and Senior Voting Band at the Dunearn Secondary School polling station in Singapore. Photo: Bloomberg

(Bloomberg) — Singapore’s ruling party retained a firm grip on power but suffered its weakest performance in 55 years in office in an election on Friday, with the economy badly hit by the Covid-19 pandemic. The result could shake up politics in the city-state, leading to more populist policies.

The opposition Workers’ Party won a record 10 seats and secured two group representation constituencies. The ruling party won 83 seats — or 89% of those up for grabs, according to an official count by the Elections Department. That allows it to amend the constitution, pass laws and set policies without major obstacles.

Even so, it’s a setback for the People’s Action Party, which has always won at least 93% of parliamentary seats since Singapore became an independent nation in 1965. The result could potentially disrupt Prime Minister Lee Hsien Loong’s succession plan. It may also spur the government to adopt more reactive policies as it did in the wake of the 2011 election, when the opposition tripled its seats to six.

“It is not as strong a mandate as I’d hoped for, but it’s a good mandate,” Lee said in a media briefing early Saturday. “The results reflect the pain and uncertainty that Singaporeans feel in this crisis.”

The outcome is a warning to other governments which have faced questions over their handling of a pandemic that has crippled economies around the world. Increasingly administrations are under pressure to provide greater safety nets for workers and spend more on things like health care and aged care. That means taking on higher levels of debt for longer in countries which have historically been wary of doing so.

This “signals a new normal in Singapore politics, that the previous narratives of voters responding largely to bread and butter concerns may no longer hold water,” said Leonard Lim, Singapore country director for regional consultancy firm Vriens & Partners. “It’s a much more sophisticated electorate, one that isn’t afraid to send a signal to the PAP about its displeasure over the government’s performance even when economic worries weigh heavily on their minds.”

Lim said the “remarkable” results show many voters cast ballots motivated by a desire for diverse and credible parliamentary representation.

Deputy Prime Minister and Finance Minister Heng Swee Keat, who has been tipped to succeed Lee, won a tight race in the East Coast group constituency.

In the briefing, Lee again reaffirmed an earlier promise to hand over Singapore “intact” and in “good working order” to the so-called “fourth generation” of party officials, who have helped spearhead the government’s response to Covid-19. The prime minister has signaled he would step aside by the time he turns 70 in 2022.

Lee spoke about the loss of income, anxiety over jobs, and disruption caused by more than two months of restrictive measures to curb the pandemic. “This was not a feel-good election, but one where people are facing real problems and expect more rough weather to come,” he said.

“It’s a flight from the status quo rather than a flight to safety — a vote for change,” said Eugene Tan, a political analyst and law professor at Singapore Management University. “The 4G has their work cut out for them. They have little time to rebuild the trust and confidence of Singaporeans. They are not in a comfortable position and how they respond to this sobering reality check is crucial.”

The next government will face the task of leading Singapore through one of its most tumultuous periods after it became one of Asia’s hardest-hit countries in the coronavirus pandemic with more than 45,000 cases, mostly migrant workers. Officials project Singapore’s gross domestic product will contract as much as 7% this year while employment fell in the first quarter by the most on record. That’s despite the government earmarking about S$93 billion in special budget support.

Besides the Workers’ Party, which won six seats in the last election, others struggled. Progress Singapore Party, a newcomer led by former PAP stalwart Tan Cheng Bock and supported by the prime minister’s brother, Lee Hsien Yang, failed to win any seats. Tan lost narrowly in his West Coast district, getting 48% of the vote.

Along with the 10 elected seats, the opposition will get two additional representatives under a designation called the non-constituency member of Parliament, or NCMP. Lawmakers approved the scheme via a constitutional amendment passed in 1984 after the PAP swept the previous four elections. It was increased to 12 from nine in 2016, when NCMPs were given the same voting rights as elected MPs.

Campaigning has been vigorous despite one of the shortest election cycles in the world at just nine days. The PAP has sparred with the opposition on everything from housing issues to the standard of living and goods and services tax, to the use of non-elected members of parliament.

Some polling booths saw long lines amid a high turnout as election officials took special precautions such as temperature screenings, the use of disposable gloves and safe distancing rules.

“It shows us that there is dissatisfaction about some things that Singapore has done — whether it be the leadership renewal, the way the virus was managed, or holding the election in the midst of a pandemic,” said Felix Tan, associate lecturer in international relations at SIM Global Education. “It’s a changing landscape. Young voters are not necessarily concerned with job security, they are also concerned with issues such as social inequality.”