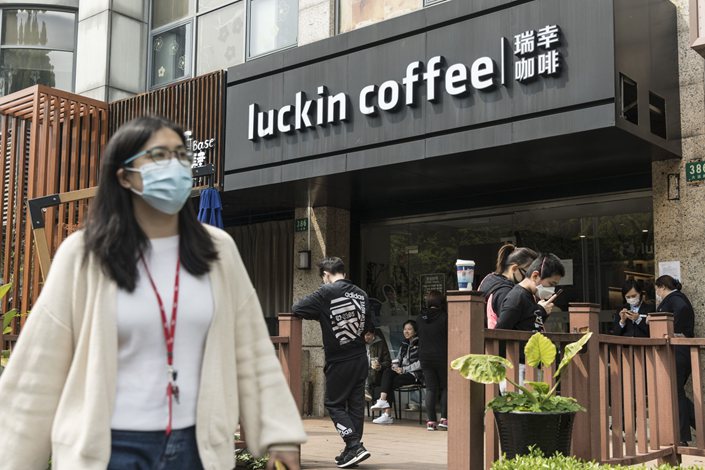 (Bloomberg) — Luckin Coffee Inc. appointed a new chairman and CEO as it tries to move past an accounting scandal that threatens to bring down the Chinese chain that once aspired to take on Starbucks Corp. in the world’s biggest consumer market.

Jinyi Guo, who stepped up as acting CEO in May, was given the job permanently, along with the chair position. One of Luckin’s founders, he replaces former chairman and co-founder Charles Zhengyao Lu, who was voted out by shareholders, the U.S.-listed company said Monday in a statement.

The shift was accompanied by a clear-out of the board, with Yang Cha, Feng Liu, Jie Yang and Ying Zeng appointed as new independent directors. David Hui Li, Erhai Liu and Sean Shao left the board following an extraordinary general meeting on July 5 and a July 12 board meeting.

While shareholders voted to remove Lu and the other three directors, some investors cried foul because Lu had nominated two of the new members to the board, potentially giving him ongoing influence at the company, according to the Wall Street Journal.

Lu has become the most visible face of Luckin’s astonishing rise and fall. The charismatic founder of a run of consumer businesses, he has come under fire since the allegations of accounting fraud emerged earlier this year. Chinese and U.S. regulators have been investigating the company over fabricated transactions that inflated net sales by about 2.12 billion yuan ($300 million) last year. The scandal has already led to the firing of Luckin’s CEO, and made its stock nearly worthless.

Founded in 2017 as Chinese demand for coffee started to take off, the company targeted scale, doubling down on expansion every time it received cash from investors. Luckin’s much-hyped strategy to take on Starbucks saw its stock climb to a record less than a year after its U.S. debut, with Luckin saying it would open more stores in two years than the Seattle-based juggernaut had in two decades.

But the scandal has rocked a company once considered among China’s brightest growth stories, sending its U.S.-traded stock down 93% this year. With tensions between China and the U.S. intensifying, and Congress moving closer to passing legislation that could bar Chinese companies from trading on U.S. stock exchanges, the situation is also a black eye for China Inc.

In May, Luckin dismissed CEO Jenny Zhiya Qian, COO Jian Liu and some employees who reported to them, after uncovering the scheme that funneled funds to the company from several third parties with links to the participants. The board said it fired the executives based on evidence showing they took part in the false transactions.

Lu became a billionaire after his fast-growing Chinese chain went public in the U.S., but much of his wealth was wiped out by the plunge in Luckin’s stock. Lu last month resigned as chairman of Car Inc., China’s biggest rental-car fleet operator, as scrutiny increased over Luckin and the accounting scandal. Shares of Car Inc. slipped as much as 2.2% Tuesday in Hong Kong.

With its leadership in turmoil, Luckin appears to be sticking to its fast-growth model to stay afloat, continuing to open stores in China at a rapid pace, figures from Thinknum Alternative Data, a New York-based company that collates company operations data from public channels, showed in May.

To reach its goal of having 10,000 shops by 2021, the company relied on a strategy of offering generous discounts to lure patrons: First-time customers got a free cup of coffee and six vouchers for 50% off future purchases. It’s a growth model that costs about $130 million in a year.

Luckin is yet to report annual results after delaying their release in April, blaming the coronavirus pandemic. That raised questions about how long its cash flow can continue supporting its breakneck expansion, especially as Chinese consumer demand stays variable due to the effects of the outbreak and the slowdown in the global economy.

The company has released only two quarters of results since listing, the most recent in November, when it reported better-than-expected revenue and said it planned to break even this year, even as its net loss widened. Earlier this year, its offices in China were raided by authorities as part of a multi-agency investigation into its finances, Bloomberg News reported.