By Matthew Walsh and Fang Zuwang 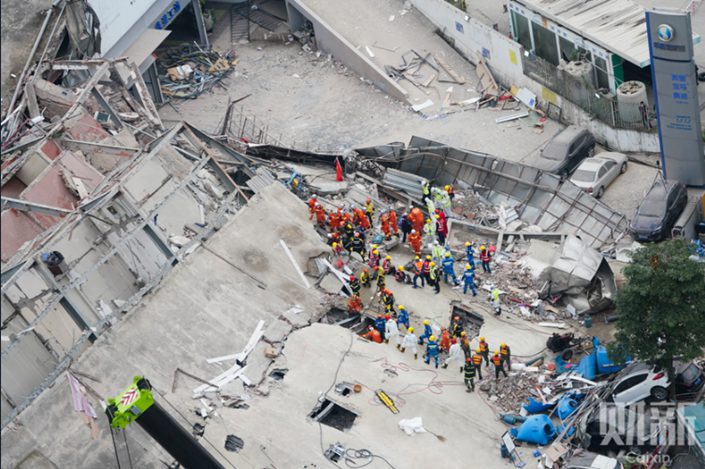 Official corruption was behind a hotel collapse that killed dozens of people in China earlier this year, according to a report published Tuesday by the State Council, the country’s cabinet.

Police have launched criminal proceedings against 23 individuals for their suspected roles in the collapse of the Xinjia Express Hotel in March, which the report blamed on illegal construction facilitated by fraud. Twenty-nine people died and another 42 were injured.

The collapse, which occurred in the eastern city of Quanzhou, was one of China’s deadliest public safety incidents in recent years. At the time, the hotel was being used as a coronavirus quarantine facility.

The case rekindled public ire against China’s millions of often-shoddy illicit structures and the informal corruption networks that allow them to be built.

According to the State Council report (link in Chinese), the Quanzhou collapse was mainly due to “illegal construction, renovation and reinforcement work” at the hotel.

It found that the facility, which was originally four stories, added three more floors during extensive renovations completed in 2018. The weight of the extra floors overloaded the structure and left it teetering “on the brink of collapse,” the report said.

Prior to the incident, the hotel had also begun illegal reinforcement work on the load-bearing steel pillars propping up its lower floors, according to the report. They eventually gave way, bringing the entire building down.

Many of those trapped under the debris were workers returning to Quanzhou from Hubei and Zhejiang provinces, two of China’s early Covid-19 hotspots.

It singled out a local electrical company and Yang Jinqiang, the owner of both the hotel and the building, for ignoring national planning, building and safety laws. Yang obtained permits for the renovation through “corrupt means,” and repeatedly turned a blind eye to safety violations at the site.

Yang and the company were assisted by government officials and other intermediaries who helped to procure fraudulent quality reports, design approvals, fire safety reports and other documents, the State Council said.

The 23 individuals targeted by law enforcement were allegedly members of that network. The Communist Party discipline committee in Fujian, the province where Quanzhou is located, will investigate suspected corruption among local government officials and punish those responsible, the report said.