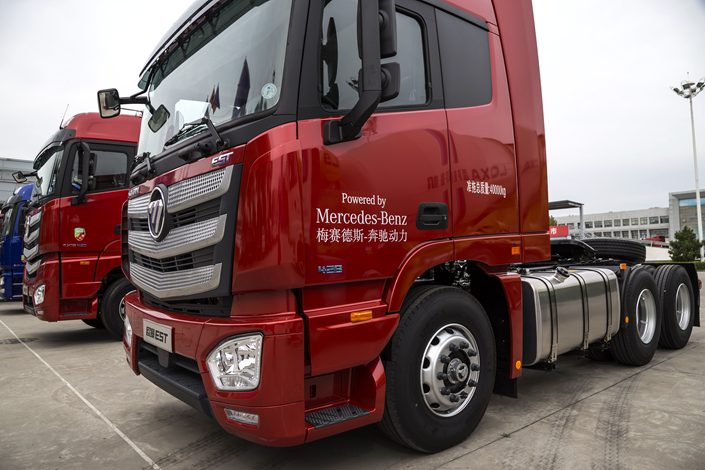 The strong June gains helped China’s commercial vehicle sales post an 8.6% rise for the first half of the year, in sharp contrast with the broader vehicle market’s 16.9% decline, according to data from the China Association of Automobile Manufacturers. Light and heavy trucks were the main growth drivers for the broader commercial vehicle category, association data showed.

Fueling the buying rush are new emissions standards set to take effect next year, which will make many trucks now on the road obsolete, said Xie Guangyao, editor of the Cvworld.cn website that tracks the industry. Those changes will see China’s newest sixth-generation emissions standards rolled out in 2020 as part of Beijing’s efforts to clean up national air quality.

At the same time, many vehicles whose emissions are at the third-generation of standards or lower will be forced off the road in some of the most heavily trafficked parts of the country.

A policy published by the State Council, China’s cabinet, in 2018 said more than 1 million medium- and heavy diesel trucks in the Beijing-Tianjin-Hebei area that can only meet third-generation standards or lower will be forced off roads by the end of this year. At the same time, governments in other heavily trafficked areas such as the Yangtze Delta and Jiangsu, Zhejiang and Anhui provinces, are being directed to limit the use of such older emissions vehicles and provide incentives to get them off the roads.

Some 560,000 vehicles that can only meet third-generation standards had been taken off the road as of the end of last year, and another 440,000 still needing to be retired by the end of this year, according to data supplied by Cvworld.cn. Xie said the shift should help the commercial vehicle sales market maintain growth through the end of this year.

The shift has provided strong recent gains for many of China’s largest truck makers. FAW Jiefang Group Co. Ltd. previously said its middleweight and heavy truck sales rose 35.7% in the first half of the year to 239,000 vehicles. And the truck division of Dongfeng Motor Group Co. also reported its commercial vehicle sales rose more than 60% in June, with light commercial vehicle sales nearly doubling.

But the commercial vehicle industry is expected to face headwinds over the longer-term as China pushes for more transport via rail to further reduce pollution. Previous data from China’s environmental protection agency showed that in 2017, transport of goods over China’s roads was 3.7 times that of the U.S. At the same time, pollution generated by transport over roads is 12.5 times higher than that for the same goods when transported by rail.

One of the earliest examples of the policy-driven drive to rail transport comes from port cities around Northeast China’s Bohai Sea, which forbid the hauling of coal by trucks starting in 2017.