By Guan Cong and Mo Yelin 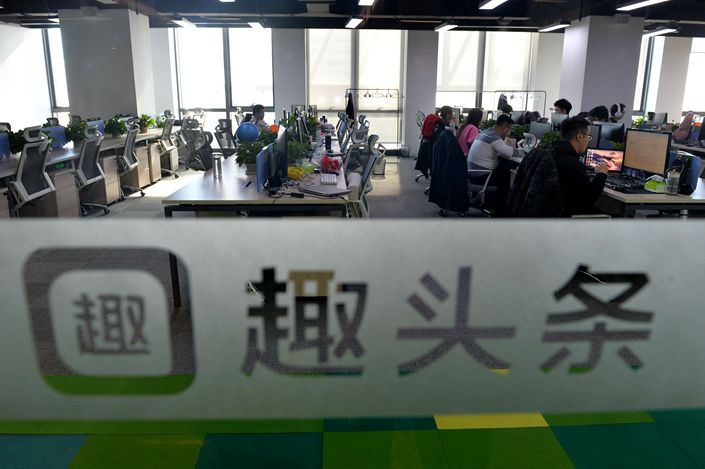 Chinese news aggregator Qutoutiao has been removed from domestic Android app stores after it was accused of allowing dubious ads on its platform in a high-profile annual consumer rights show from the national broadcaster.

Nasdaq-listed Qutoutiao Inc., the app’s operator, issued an apology on social media platform Weibo almost immediately after the show ended on Thursday evening. The company said it has set up a special working group to look into the issues raised by the CCTV report.

Qutoutiao was accused of allowing ads that contain false information or that greatly overstate the effectiveness of the products being promoted. The app was also accused of hosting content that would lead users to illegal websites, such as gambling sites.

The company lost about $220 million in market value when Qutoutiao’s stock plummeted 23% on Thursday.

Founded in 2016 and listed two years later, Qutoutiao has touted itself as the leading rival to China’s top news aggregator app, Toutiao, operated by TikTok owner ByteDance Ltd. It relies on revenue from selling advertisements, with ad sales amounting to 5.6 billion yuan ($800 million) in 2019 or 97% of its revenue that year.

On Friday morning, Qutoutiao sent out another statement on Weibo, saying it would take a series of steps to rectify the issues raised by the CCTV show. The company said it had launched an investigation into its ad partners and would suspend business ties with any found to be putting problematic ads on its platform.

This is not the first time that dodgy online ads have hit the headlines. In 2019, representatives of a business association that represents internet companies — including Qutoutiao — were summoned several times by the county’s regulators. The association was accused of turning a blind eye to its member companies allowing illegal ads on their platforms.

In 2016, search engine operator Baidu found itself at the heart of a scandal after a college student died after receiving a bogus cancer treatment he found via a paid promotion on the site.

Qutoutiao’s major selling point is that readers can earn money through simply just reading articles. Users of the app earn points for every article they read and every new user they recruit. The points can be redeemed for monetary rewards.

This business model has contributed to the fact the company has never turned a profit. In 2019, it reported losses of 2.4 billion yuan, expanding from 10.86 million yuan in 2016.

The company is one of at least eight firms, including fast food chain Burger King, that was covered by CCTV. The show, widely known as “315” in reference to global consumer rights day on March 15, was postponed this year due to the Covid-19 pandemic.