By Lu Zhenhua and Wen Simin 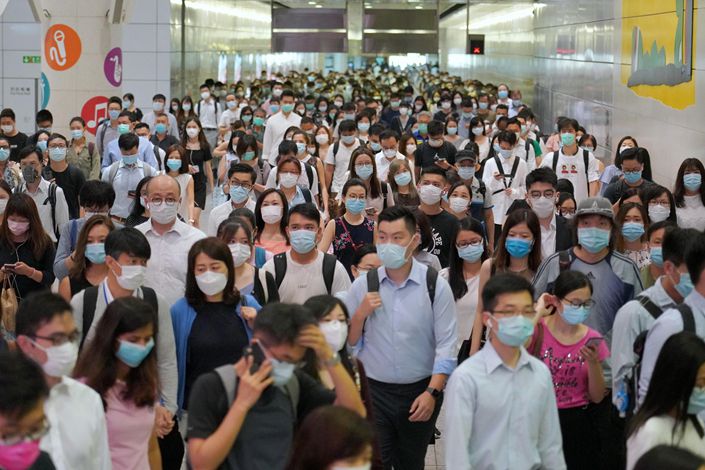 The latest Covid-19 outbreak in Hong Kong may be a consequence of loopholes in the testing and quarantine exemptions for crew members of aircraft and vessels who returned from overseas, according to local infectious and respiratory disease experts.

Crew members who contracted the virus overseas could have spread the disease through taxi drivers, who in turn further spread it to restaurant workers and customers, eventually producing outbreaks in local communities, they said.

This assessment came as the special administrative region reported 73 confirmed cases on Monday, 60 of which were local infections, bringing the total number of Covid-19 patients in the city’s latest flare-up to 567.

Yuen Kowk-yung, a professor of infectious diseases and head of microbiology department at the University of Hong Kong, said taxi drivers could be the source of local infections, but added that infected crew members could have also spread the disease on other forms of transportation.

Local health experts began to call for review of the exemptions after a cargo pilot who returned from overseas was later confirmed infected on July 4.

The 54-year-old cargo pilot, who had visited Kazakhstan and Turkey, was exempted from coronavirus testing and quarantine upon his arrival, and simply subject to medical observation. He was only confirmed to have the disease after he went to a private doctor on July 3.

On July 8, the city reimposed quarantine measures and mandatory testing of crew members. The following day, the city reported eight imported cases, four of which were aircraft crew members.

David Hui, a professor of respiratory medicine and chairman of the medicine department at the Chinese University of Hong Kong, also criticized the exemptions on Saturday.

He added that it was difficult to trace the sources and close contacts of about 40% of local infections, so “that’s why this wave of outbreak is so severe.”

In response to criticism, the Hong Kong government clarified in a statement on Sunday that linking the latest wave of infections to the quarantine exemption arrangement is a “misunderstanding.”

The statement said that “the quarantine exemption arrangement must be in place to ensure the normal operation of Hong Kong on all fronts under the epidemic, including the need to safeguard adequate supply of food and necessities, ensure normal governmental operation and sustain commercial activities in the interest of Hong Kong's economic development.”

The categories of people exempted under the regulations are essential personnel which include cross-boundary goods vehicle drivers, aircrew, sea crew and foreign consular staff, it said.

It also added that “there had not been any confirmed Covid-19 cases among exempted people arriving from the Mainland, Macau and Taiwan,” refuting rumors in Hong Kong that the virus could have been brought in by exempted travelers from the Chinese mainland.

Starting on Jun. 19, the limit for outdoor public gathering had been loosened to 50 people from eight, and indoor activities such as wedding ceremonies were also allowed.

Many confirmed cases in the latest outbreak have been linked to locations with eased social distancing measures, including restaurants, schools and supermarkets.

Hong Kong’s inadequate testing capacity is also believed to be contributing to the difficulty of containing the outbreak. The city can only process 5,000 tests per day, far less than Beijing’s capacity of 300,000.

If the situation continues to get worse in a week, the government should consider issuing stay-at-home order, Yuen told local media on Monday.