In Depth: China’s Ambitious Plans to Land Rover on Mars Next Year 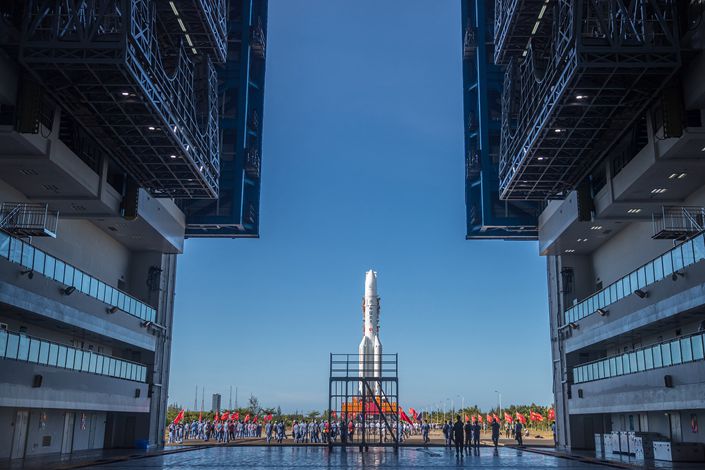 The Wenchang Space Launch Site in Hainan province will launch a Mars mission on Thursday.

The easiest way to send a spacecraft to Mars is to fling it into space at just the right angle. If done right, the probe will hurtle along a crazy-looking elliptical route for about nine months until it reaches the red planet’s field of gravity and begins circling its target.

The best time to launch such a mission is once every 26 months, when the distance between Earth and Mars shortens to a mere 60 million kilometers — the nearest the celestial neighbors ever get. Astronomers call this period “close approach,” and the next one will occur on Oct. 6.

The run-up to close approach typically heralds a flurry of Mars missions, and this year is no exception. On Monday, an orbiter designed by the United Arab Emirates successfully blasted off from a space center in Japan, marking the first interplanetary mission by a Middle Eastern country. Next week, NASA plans to launch Perseverance, a rover designed to scour the planet’s surface for signs of life.

China, too, has big plans. Sometime between Wednesday and mid-August, the Asian giant will launch Tianwen-1, a combined orbiter, lander and rover whose stated aims are to search for hints of life and analyze the Martian environment.

As the country’s first solo mission to the red planet, Tianwen-1 underscores China’s transformation into an elite spacefaring power. Its $8 billion space program outstrips every other country except the United States. If Tianwen-1 is successful, China will become only the third nation to operate a spacecraft on Mars, after the U.S. and the Soviet Union.

The project is the latest in a bevy of attention-grabbing space expeditions that challenge a historically American-dominated field. Last year, in a first for humanity, China’s Chang’e-4 spacecraft achieved a soft landing on the dark side of the moon, sent out a rover to gather data and relay it back to Earth via satellite, and even germinated a seed onboard.

Beijing also intends to begin launching a self-developed multimodule space station from 2021 and establish a permanent moon base near the lunar south pole. Even Tianwen-1 is part of a sustained engagement with Mars, with a sample-gathering mission to follow before 2030, according to state broadcaster CCTV.

But first, the spacecraft has to get there. And given humanity’s Mars landings so far have a less than 50% success rate, this is far from guaranteed.

After months careening through the cosmos, Tianwen-1’s mission may quite literally go up in smoke in the space of a few minutes.

Tianwen-1’s journey will have three main phases. First, China’s Long March 5 rocket will blast off from the Wenchang Spacecraft Launch Site in South China’s tropical Hainan province, delivering the probe into the skies. Scientists on the ground will work to transfer the craft from Earth’s orbit to Mars’s.

Then, the craft will move into a so-called “parking orbit,” scan the predetermined landing site, and split into its two main parts: the orbiter and the lander, which houses the rover. The orbiter will move into another orbit above Mars and relay information back to Earth.

Meanwhile, the lander will begin the final and riskiest part of the mission — something Chinese scientists have dubbed the “seven minutes of fear.” It will plunge into the Martian atmosphere at 4.8 kilometers (2.983 miles) per second and fight temperatures of thousands of degrees Celsius as it plummets toward the surface, said one of the probe’s chief designers, Zhang Rongqiao, in a recent interview with state broadcaster CCTV.

The lander will deploy parachutes and reverse thruster engines to slow its descent and cushion the final impact. If everything goes to plan, next April it will release its rover, a golf cart-like vehicle with wing-like solar panels, to roam over the Martian surface.

Tianwen-1’s mission brief is to research Mars’s geological features, soil chemistry, climate, environment and internal structures. It will probably also look for biomolecules and biosignatures — molecules and other phenomena that usually appear in biological processes and which could provide scientific evidence of current or extinct forms of life.

While China has not announced a final landing site, one candidate is Utopia Planitia, a large plain where NASA missions previously found large amounts of water ice.

Contrary to public perception, ice is abundant on Mars, especially at its northern and southern poles, said Xu Luyuan, a postdoctoral researcher at a key national planetary science laboratory at Macau University of Science and Technology.

Significant quantities of liquid water — a prerequisite for all known life — would upend how we think about Mars. But such a discovery is unlikely on a planet where the average temperature is a frigid minus 60 C.

Nonetheless, some scientists think the planet’s long, deep gullies and flat, low-lying depressions indicate that water may once have flowed over its surface. And many other geographic features remain unexplored, such as Olympus Mons, a 27 kilometer-high mountain that is three times as tall as Mount Everest.

The planet’s tempestuous climate is also good fodder for research.

“In reality, Mars is a volatile planet with very strong sandstorms. By researching this volatility, we may know its geological functions and atmospheric changes at surface level,” Li Chunlai, the probe’s deputy chief designer and ground applications commander, previously said in an interview with CCTV.

For China’s scientific community, Tianwen-1 has been more than a decade in the making.

According to probe designer Zhang, the idea of a Chinese Mars mission emerged while building the country’s first lunar orbiter, Chang’e-1, in 2007. Four years later, the country’s first interplanetary probe, Yinghuo-1, piggybacked on Russia’s Fobos-Grunt Mars explorer when it blasted off from Kazakhstan’s Baikonur Cosmodrome.

On that occasion, a mechanical failure stranded the craft in a low Earth orbit until it plummeted uncontrolled into the Pacific Ocean in January 2012.

The flop convinced Chinese astronomers to go it alone on their next Mars project. In 2013, a group of experts put forward a two-step plan for exploring the red planet, according to CCTV reports.

The plan was finally approved in January 2016. In April, the then-head of the China National Space Administration, Xu Dazhe, said on state television that the country “will launch an exploratory satellite to Mars in the last year of the 13th Five-Year Plan, namely around 2020.”

In the northern province of Hebei, astronomers established what CCTV claimed was Asia’s largest experimental landing ground. The 140 meter-high, 120 meter-wide structure mimicked Martian geology and gravity, allowing scientists to model the crucial last moments of the lander’s descent in order to give it the best chance of survival.

Tianwen-1, whose name means “Questions to Heaven” and references the title of one of China’s best-known classical poems, was formally unveiled in November last year. If its planned launch goes smoothly, some of those questions may soon have answers.

This story has been updated to correct the speed at which the lander was expected to enter Mars' atmosphere. It was 4.8 kilometers per second.