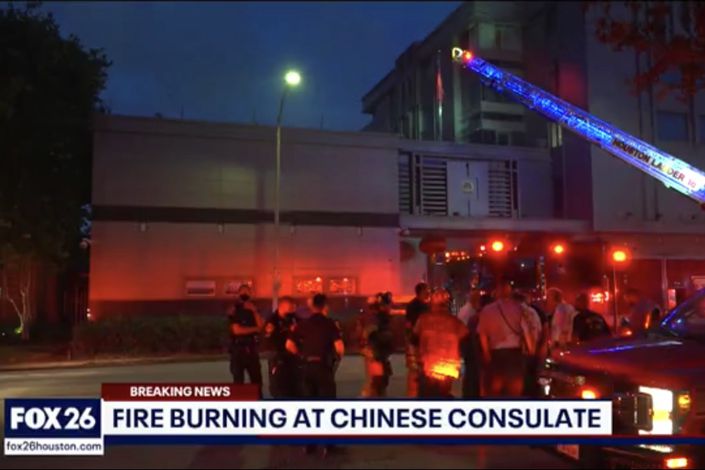 Local firefighters and policemen were denied entry to the Chinese Consulate General in Houston after receiving a 911 call about a fire. Source: FOX26

China’s Ministry of Foreign Affairs confirmed Wednesday that the United States told it to close the Chinese Consulate General in Houston within 72 hours. The ministry vowed to retaliate if Washington proceeds with the unilateral action.

“The U.S. side on July 21 abruptly requested the Chinese side to close the consulate general in Houston,” Foreign Ministry spokesperson Wang Wenbing said at a press conference asked about the abrupt order.

Wang said the action is a “unilateral political provocation,” which “severely violated” relevant regulations of the China-U.S. consular treaty and “intentionally sabotaged” the two countries’ bilateral relationship. Tensions between the world’s two largest economies have been rising amid a series of disputes over technological, economic and geopolitical interests.

While strongly condemning the “rude and unreasonable” action, Wang urged Washington to “immediately withdraw the relevant wrong decision, as otherwise China will surely issue a just and necessary response.”

He disputed that the closure of the consulate was because of “reciprocal” issues. He said the number of the U.S. diplomatic personnel in China is “far more” than China’s in the U.S.

If Washington proceeds with the order, the Chinese consulate will close Friday. It was not immediately clear whether the closure is permanent or temporary, or whether Chinese diplomats and staff who worked at the consulate would be allowed to stay in the country.

The Chinese Consulate General in Houston is one of five Chinese general consulates in the U.S. and covers Texas, Oklahoma, Louisiana, Arkansas, Mississippi, Alabama, Georgia and Florida as well as the Commonwealth of Puerto Rico.

Hours after the Chinese Foreign Ministry’s condemnation Wednesday, Morgan Ortagus, a spokeswoman at the U.S. State Department, confirmed the order and said the move was to “protect American intellectual property and Americans’ private information.”

“The People’s Republic of China has engaged for years in massive illegal spying and influence operations throughout the United States against U.S. government officials and American citizens,” Ortagus said in an emailed statement.

“We are setting out clear expectations for how the Chinese Communist Party is going to behave, and when they don’t, we’re going to take actions that protect the American people,” U.S. Secretary of State Mike Pompeo said during a Wednesday press briefing when asked about the decision to close the Chinese consulate. Pompeo is on a trip to Britain and Denmark.

The State Department move coincided with a U.S. Justice Department indictment Tuesday charging two Chinese nationals with hacking into computers of high-tech companies and individuals in 11 countries including the U.S. and Britain.

Both of them recently “probed for vulnerabilities in computer networks of companies developing Covid-19 vaccines, testing technology and treatments,” the Justice Department said in a statement.

In Houston Tuesday evening, a fire was reported at the Chinese consulate, according to local TV station FOX26, citing Houston police reports.

Houston police said the fire was caused by people burning classified documents in the consulate’s courtyard before an eviction. Local firefighters and police officers who arrived at the scene after receiving a 911 call were denied entry, according to local media reports.

Visiting the U.K. Tuesday, Pompeo praised Britain for being tough on China during meetings with U.K. Prime Minister Boris Johnson and Foreign Secretary Dominic Raab, apparently in an effort to form an alliance against China.

“I want to take this opportunity to congratulate the British government for its principled responses to these challenges,” Pompeo said. “Well done.”