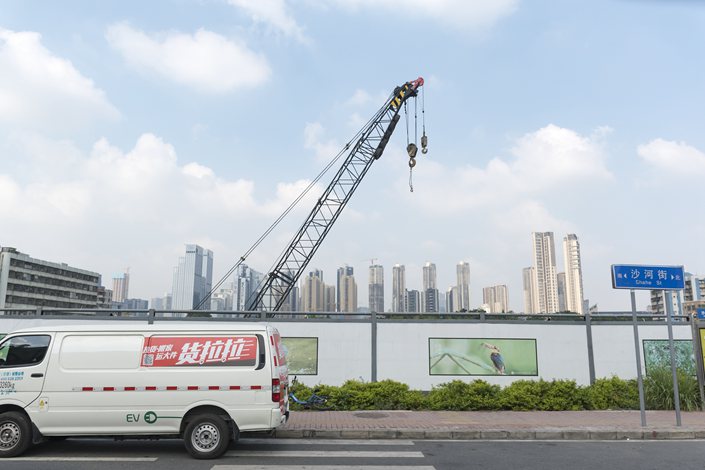 Baishizhou, the former site of one of the largest urban villages in Shenzhen, was in the process of being redeveloped on Sept. 25, 2019.

The southern boomtown of Shenzhen has proposed a new rule that would give the government or developers authority to buy out property from small numbers of holdouts when they stand in the way of redevelopment projects.

Such authority is largely absent in China right now, giving holdouts, known locally as “dingzi hu,” the power to blackmail developers who must buy out 100% of residents when trying to redevelop land into new residential, commercial or other projects. Such holdouts are often featured in local news reports due to their dramatic David-and-Goliath storylines, as well as dramatic photos of entire areas that have been cleared for development with often just one or two dwellings left intact.

The proposed Shenzhen policy would mirror systems in developed countries, which typically give developers or governments the authority to force a sale from holdouts at market rates if the new developer can voluntarily buy out a set percentage of existing property owners, usually 80% or higher.

The new policy is aimed at removing a persistent obstacle in the way of urban renewal, and laying a legal foundation for sustainable urban development, Chen Aipin, who leads the Shenzhen Housing Research Association, told Caixin.

The new policy would be achieved by modifying an existing rule to say that if a developer obtains 95% of the legal property rights of an existing development and complies with other housing acquisition rules, then the city or district government can execute individual acquisitions from remaining property owners. Holdout residents who feel such acquisition terms are inadequate can file for an administrative proceeding to arbitrate the case.

Under current guidelines, developers need to obtain rights from 100% of existing property owners of 100% of the area before they can redevelop a project. The rule modification was contained in a city government document published Monday, seeking opinions on the matter through Aug. 3.

“It is difficult to completely avoid the problem of individual property right holders unwilling to relocate, whether it is government organizations or a market-oriented company that wishes to undertake a redevelopment,” the document stated.

The action is being taken with the blessing of the central government, which often uses Shenzhen as a testing ground for such reforms that are later rolled out in the rest of the country.

China’s property market is one of the world’s largest but also one of its newest, with most modern buildings dating back to the 1990s or later. Most of those stand on land once occupied by much older structures that were acquired from previous residents, often in exchange for new properties in more remote locations. Residents are often pressured to sell their homes, though local governments are also reluctant to take drastic action that could result in large protests.

The current policy requiring the acquisition of 100% of ownership rights often delayed or sometimes even killed redevelopment projects because many would-be developers couldn’t reach agreements with all existing tenants.

The new policy was first put on the Shenzhen city government’s agenda in 2016. The points of contention that prevented it from moving forward sooner included debate over whether the government and developers should have the power to force unwilling tenants to leave, a real estate source who wished to stay anonymous told Caixin. Stakeholders also could not agree if the new policy might conflict with existing property laws.