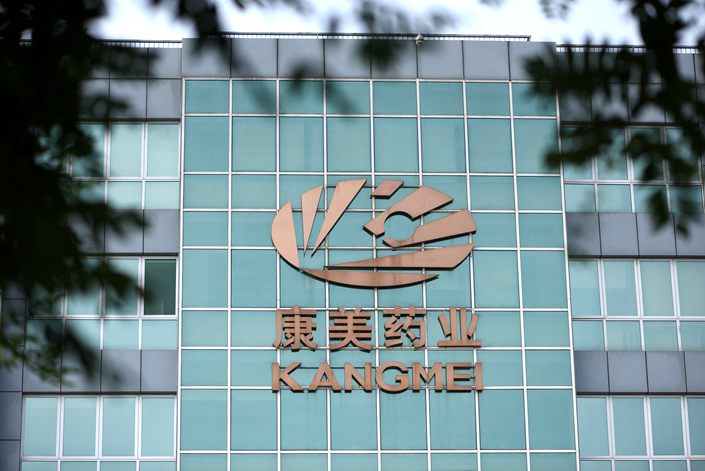 A state-owned company will take over debt-ridden drugmaker Kangmei Pharmaceutical Co. Ltd. after the company was punished for a $12.6 billion financial fraud, according to exclusive sources.

Kangmei’s controlling shareholder, Kangmei Industry Investment Holdings Co. Ltd., is planning a major matter that may lead to a change in control of Kangmei, the company said Thursday in a statement. Because of the uncertainty of the matter, the company’s stock was suspended from trading for two days starting Thursday, Kangmei said. Shanghai-listed Kangmei is one of China’s biggest publicly traded drugmakers.

Exclusive sources told Caixin that the Guangdong provincial government recently held a meeting and named Guangdong Hengjian Investment Holding Corp. as custodian of Kangmei. Details haven’t been finalized, but a possible option is to have Hengjian hold the controlling shareholder’s voting rights in Kangmei, one of the sources said.

As early as May 2019, just after Kangmei admitted to overstating its cash, former Kangmei Pharmaceutical Chairman Ma Xingtian approached Hengjian for a possible equity investment. The Guangdong government was also interested in brokering a restructuring of Kangmei. But as the financial fraud turned out be far more serious than Kangmei originally acknowledged, the restructuring talks never made substantial progress.

Hengjian was the first investor in talks with Kangmei, but the parties failed to reach a deal. Kangmei also approached state-owned Guangzhou Pharmaceuticals Corp., according to a person familiar with the matter.

Kangmei’s strategy was to sell assets to ensure bond repayments and buy time to avoid a forced delisting, the person said. Now that the fraud investigation has been concluded and punishment has been handed down, state-owned capital is willing to step in, the person said. The company was fined 600,000 yuan by top securities regulators in May for inflating revenues and fabricating bank deposits.

Kangmei said in April 2019 that “accounting errors” caused a 29.9 billion yuan overstatement of its cash holdings. An investigation by regulators subsequently found that the company engaged in a series of illegal activities including forging documents for nonexistent business activities leading to an overstatement of cash holdings amounting to 88.7 billion yuan ($12.6 billion) from 2016 to 2018.

Earlier this month, the police took compulsory measures against Ma on suspicion of illegal disclosure of information and failure to disclose important information. GF Securities Co. Ltd., the sponsor of Kangmei’s initial public offering in 2001 and adviser in many of Kangmei’s financing deals, was banned from the securities-sponsorship business for six months and from bond underwriting for a year.

The government’s takeover is to ensure the survival of Kangmei, a person close to the Guangdong government told Caixin. Next, the government still hopes to push forward a restructuring of Kangmei in a market-oriented way, the person said.

The government is currently coordinating an asset sale by Kangmei to repay some debt, a creditor said.

As of the end of 2019, Kangmei had 501 million yuan in cash and cash equivalents but had total debt of nearly 30 billion yuan.