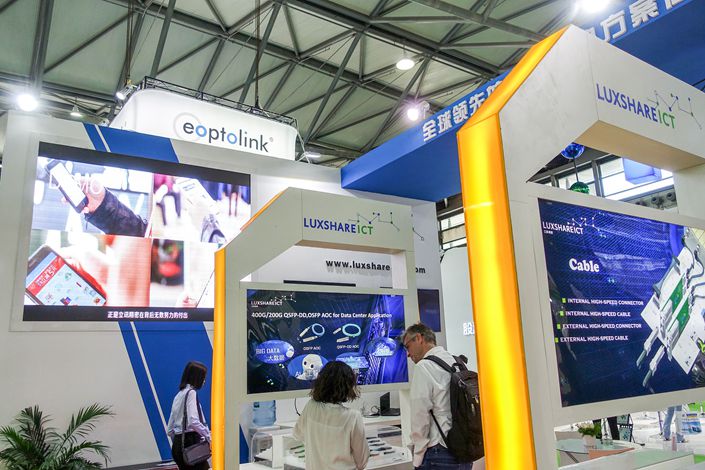 The deal is widely seen as a win for Luxshare, which produces accessories and components like cables and chargers, but is also the world’s largest manufacturer of Apple’s AirPods.

Wistron Corp. has announced that it will take a 3 billion yuan ($428.3 million) stake in Luxshare Precision Industry Co. Ltd., just days after the prominent iPhone assembler said it would sell two of its subsidiaries to the latter company.

Taiwan-based Wistron said it will purchase 56 million shares of Luxshare for 53.2 yuan each, according to a statement released Wednesday. The deal would give Wistron a 0.81% stake in the Shenzhen-listed Luxshare, making it the latter’s fifth-largest shareholder.

Wistron is one of only three contract manufacturers that assemble Apple Inc.’s smartphones. Earlier this month, the company said it would sell two of its subsidiaries on the Chinese mainland to Luxshare for 3.3 billion yuan in total. One of those units, based in the city of Kunshan, East China’s Jiangsu province, runs Wistron’s sole iPhone manufacturing site, according to people familiar with the company’s business.

The deal is widely seen as a win for Luxshare, which produces accessories and components like cables and chargers, but is also the world’s largest manufacturer of Apple’s AirPods. The deal makes the Guangdong province-based company the first from the mainland to win a coveted role assembling an Apple device since China-U.S. trade tensions broke out.

The deteriorating relationship between China and the U.S. has led each side to hike tariffs, prompting multinational companies like Wistron to pursue a strategy of diversifying their supply chains. Wistron has over the years gradually shifted some of its production to countries where labor costs are lower, like India.

In its statement Wednesday, Wistron referred to its stake in Luxshare as a “strategic” investment.

Wistron is smaller than the other two iPhone assemblers — Pegatron Corp. and Hon Hai Precision Industry Co. Ltd, which does business under the name Foxconn. Analysts said Wistron has been struggling to compete, and its mainland operations were running on thin profit margins.

Luxshare, in contrast, is among the largest of a crop of up-and-coming mainland electronics houses that are increasingly winning orders from established firms like Foxconn. In 2019, Luxshare became the largest manufacturer of AirPods — one of the fastest-selling consumer accessories on the market —– which helped give the company one of the best performing stocks in Asia for the year.

On Wednesday, Pegatron also announced that it would purchase 600 million yuan in Luxshare shares. After the deal, Pegatron would follow Wistron to become Luxshare’s sixth-largest shareholder, with a 0.57% stake.