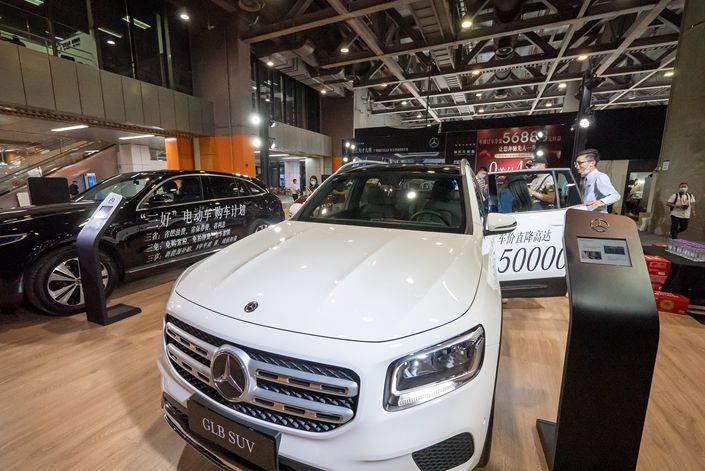 Mercedes-Benz cars on display at an auto show in Guangzhou, July 24.

China’s luxury car market surged 27% in June, accounting for a record 14.8% of all passenger car sales for the month, the China Passenger Car Association said, as manufacturers rolled out more lower-priced entry-level models in a bid to expand their customer base.

Mercedes-Benz was representative of the trend, announcing three new models for the China market selling in the 300,000 to 380,000 yuan ($42,800 to $54,200) range at a regional car show in the interior city of Chengdu. The company’s parent Daimler AG previously announced that China was its only major global market to grow in the first half of this year, mainly propelled by the company’s 21.6% sales surge in China during the second quarter.

China’s overall motor vehicle market started showing signs of recovery in April, ending more than a year of contraction, which was made worse by the peaking of the nation’s coronavirus epidemic in the first three months of the year. Sales turned positive with a 4.4% gain in April, followed by 14.5% and 11.6% growth in May and June, respectively.

But the comeback has been unevenly spread across the market’s various segments, with luxury brands driving much of the return to growth. Luxury car sales rose 28% in the month of May, according to the Passenger Car Association, even as the segment for the cheapest cars priced at 80,000 yuan or less has continued to sag.

Most of the major luxury brands posted double-digit growth for the second quarter, including Mercedes-Benz, BMW, Lexus and Porsche.

At the other end of the spectrum, tough times have continued for China’s own domestic brands, which tend to cluster near the lower end of the market. That trend was reflected in June statistics that showed June sales for Chinese brands tumbled 16% for the month, far weaker than a 6.2% drop for the broader passenger vehicle market that month, according to the China Association of Automobile Manufacturers. That gave the domestic brands just 33.5% of the market in June, a historic low.

While luxury car makers are generally performing well, they are also facing a new and growing challenge from electric vehicle (EV) superstar Tesla Inc., which has been selling its similarly priced, domestically manufactured Model 3 sedans since the start of the year.

Tesla sold 45,000 Model 3 sedans in the first half of the year, and has previously said it plans to produce 150,000 for the year as it ramps up its new Shanghai facility. It expects to start producing and delivering its Model Y in China next year, as the facility further increases production en route to its final planned annual capacity of 500,000 vehicles.