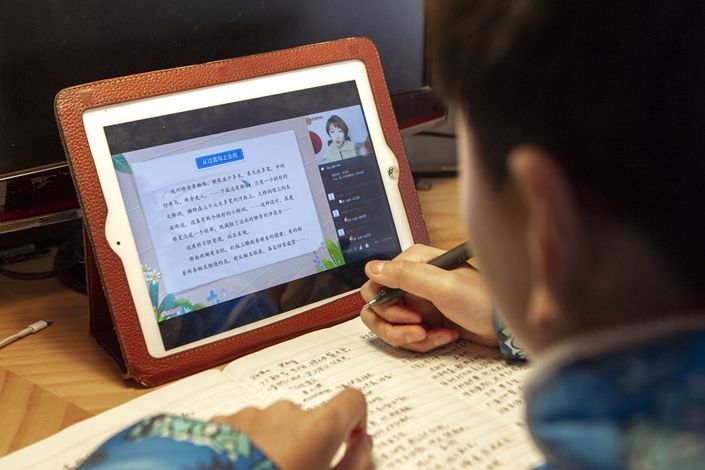 China’s online education market is white-hot, estimated to grow some 12% to $61.5 billion this year with a major boost from the Covid-19 pandemic. But despite all the money flowing in, online education firms are struggling to make a profit, engaged in a fierce competition for market share with massive capital investments fueling a price war. This race to the bottom will force a consolidation of the industry, with investors placing their bets on which company is best-positioned to come out on top.

Online education services in China are among the most advanced in the world, with refined business models, a high penetration rate, and high average spend of $1,400 per year (roughly a quarter of annual wage income per capita in Beijing). But the industry has also homogenized as it developed, with little differentiation between companies’ products and marketing methods.

Like their offline counterparts, online tutoring offerings can be categorized by size: big classes, small classes with fewer than 20 students, and one-on-one sessions. While the online education market was initially dominated by one-on-one sessions, bigger classes are more easily scalable and profitable given their low customer acquisition costs. But unlike traditional teaching, in which one instructor teaches the whole class, the prevailing online mode on major platforms features dual instructors, in which a highly qualified lecturer is supplemented by after-class assistants charged with answering questions and providing guidance to smaller groups of students on a more interactive basis via WeChat or phone calls.

This development has also helped service providers break into the “sinking market,” a term used by analysts and domestic media to refer to consumers in small towns and rural areas. In first and second-tier cities, the offline education market is highly saturated. In lower-tier cities, however, scarce public education resources have led students to seek tutoring online from nonlocal instructors. Zuoyebang, which provides tutoring services for primary and secondary schoolers, says more than half of its students are from the “sinking market,” and GSX told Caixin that the majority of its students are based in third-tier cities or lower.

TAL first started exploring big class broadcasts in 2013, with the dual instructor facet coming later, developed initially by Netease Youdao. The combination was immediately copied by other firms as they realized the economic benefits, with GSX’s move to the big class, dual instructor model propelling it out of a three-year revenue slump to report exponential growth with net profits of $2.8 million in 2018 and $323.4 million in 2019. Now, nearly all major online education firms run big classes with multiple instructors.

While the big class model has helped online education firms reach new customers, expanding the market and increasing their revenues, it has not (with the exception of GSX) brought a corresponding increase in profits. Like Luckin Coffee, effectively all major online education platforms are competing to attract customers on price, selling trial packages well below cost in the hopes that they can be upsold later on. Xueersi, for example, offers 13 classes at 9 yuan ($1.29) while Gaotu Ketang offers 16 classes at the same price.

But in practice, it’s hard to convince price-sensitive students to purchase much more expensive classes. Pan Xin, former COO of Xindongfang, told Caixin that approximately 10% to 30% of students taking the low-price classes could be turned into long-term customers. NetEase Youdao reported on its 2020Q1 financial statement that only 15% of its students on the 9-yuan package signed up for more classes after the introductory discount, and even that is above the industry average.

Some industry veterans point out that such intense competition has driven down gross margins across the board. A 9-yuan class package, for example, could cost a company as much as 130 yuan ($19), including 100 yuan for textbooks, 20 yuan for textbook delivery fees, and 10 yuan for instructor fees. In the old days, when online classes were mostly recordings instead of live sessions, companies enjoyed gross margins as high as 70%.

Customer acquisition costs (CAC) have soared as a result. Xueersi said in its latest earnings report that its spent 546 yuan on average to acquire each new customer, up 38% from the same period last year. NetEase Youdao’s CAC likewise rose from 796.6 yuan to 1,085.5 yuan quarter-on-quarter. Even GSX, which has 20%-30% lower CAC than the industry average, reported that its CAC rose 86.6% y-o-y in the first quarter. This is due in part to the fact that WeChat now limits the number of daily check-in posts from online education companies, a cheap advertising channel that GSX previously relied on heavily to promote itself. Losing that source of cheap traffic has forced GSX to resort to other, more expensive means of advertisement.

Despite these challenges, the sector continues to draw strong interest from investors, with shares of K-12 online education companies rising 37% on average in the first half of 2020 according to China Securities. But while the coronavirus has boosted demand for online education and pushed up online education companies’ share prices, the hype has also drawn attention from short-sellers. They dispute supposedly successful players like Gensheixue’s ability to make a profit in the current market environment, especially following the Luckin Coffee scandal.

Prominent shorts like Muddy Waters have published at least nine reports since February claiming that GSX is “too good to be true,” with a fourfold increase in annual revenue in its latest earnings report. Most recently valued at $10 billion, it also reported a huge increase in net profits and number of students. Adding to suspicions, TAL Education Group disclosed earlier this year that its staff members forged sales data, and Citron Research claims it talked to a GSX employee that said 40% of students were faked. Shorts are not only interested in GSX, either: Muddy Waters has also bet against New Oriental and TAL, arguing that 70% of their users are also fake.

Fortunately for the companies, these short-sellers have failed: GSX, TAL, and EDU shares have all risen over the last six months. But the shorts raised important questions that remain unanswered. With every company making a loss, short reports have increased recognition of the industry’s unprofitable business logic, and despite the company’s stock performance, core indicators published by companies like GSX such as their customer acquisition costs and conversion rates are not entirely convincing.

In the end, all of the companies are trying to solve the same problems and upsell more expensive courses to their user base after drawing them in with low-cost courses. With big online classes, there is little variation in the quality of instruction. Those who can optimize their marketing channels and manage to convert trial students into paying customers quickly and cheaply will be able to take a dominant stake of the online learning market. As demand for tutorials over the summer break winds down and the pandemic comes under control, the battle will ultimately be decided by operational efficiency. The last firm standing will be the one who can best retain students without burning through their war chest.

TAL Education, also known as Haoweilai, was originally established in 2003 under the name of Xueersi. TAL Education is now the parent company of several leading education institutes including Xueersi, which focuses on K-12 classes, and Kaomanfen, which provides SAT and TOEFL classes to students who want to study abroad. TAL went public in 2010, and was the first Chinese company listed in the U.S. to focus on K-12 education. In April, TAL disclosed that some of its staff members had forged contracts and other documents to increase reported revenues, leading its stock to fall 17%. TAL has over 34,000 full-time employees, among whom 62% are full-time teachers and 13% are contractors.

Founded by Chen Xiangdong in 2014, GSX is an online B2C education company focusing on K-12 tutoring. The company obtained $50 million for A series financing in March 2015, breaking the record at that time for A series financing by a Chinese startup; Forbes named it China’s fastest-growing tech company that year. In June 2019, GSX listed on the NYSE, becoming the first public K-12 online education company to make a profit. As of this month, GSX is valued at $21 billion.

Besides its leading platform Genshuixue, the company has also developed subsidiaries like Jinyou Xuetang, which provides online courses about finance and accounting to adults, and Weishi, which helps users find online instructors specialized in different fields.

Founded in 2012, the Beijing-based start-up Yuanfudao (roughly translated as Ape Tutor) is one of the largest online education providers in China and recently finished its Series G fundraising with a valuation of $7.8 billion, the highest among nonlisted Chinese education companies. It’s primary backers include Hillhouse Capital, Tencent Holdings, Boyu Capital and IDG Capital. It aims to achieve operating income of $1.43 billion this year.

Focusing on K-12 tutoring, Yuanfudao has developed a wide range of mobile apps that provide students with live tutoring and homework support. The company had accumulated 400 million users as of January 2020, and was named by Forbes as one of China’s most innovative companies in 2019.