By Matthew Walsh and Feng Huamei 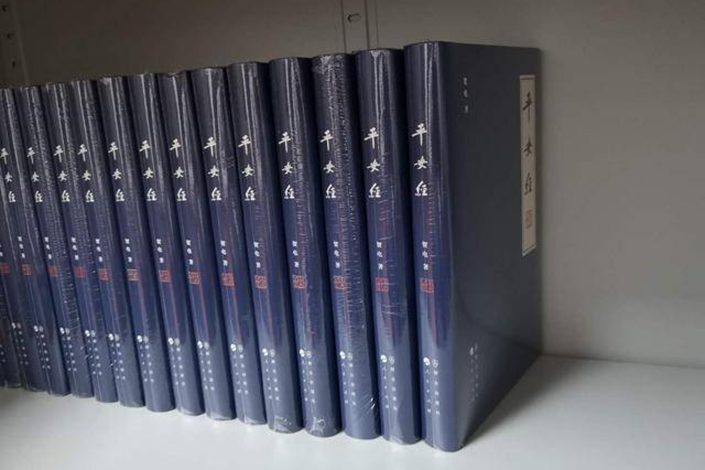 Despite its repetitiveness, several state-affiliated media outlets have lavished the tome with praise.

It’s hard to see at first glance why the book at the center of a Communist Party investigation has caused such a stir.

Many other chapters of “Peace Sutra” follow a similarly surreal template. But authorities care more about the author and his endorsers than the essays themselves.

He Dian is not just a prolific writer, but also the second most senior police official in Northeast China’s Jilin province. His book has received glowing reviews from local government and media outlets since its publication in December.

But his success has also attracted the wrong kind of attention. After Chinese social media users pilloried the book, the Jilin government said Wednesday that provincial-level party political, discipline and publicity officials were looking into the matter.

The probe is an internal party investigation, and He is not currently suspected of having broken the law. Nonetheless, the move highlights how China’s rulers have become increasingly intolerant of literary-leaning officials who fail to embody an ideal of simplicity, erudition and competence.

Chinese President Xi Jinping, who has published a hefty volume on Chinese governance, previously urged officials to eschew “vague, elusive and long-winded writing” in favor of “short, factual and new” styles while serving as vice president in 2010.

According to the page (link in Chinese) for “Peace Sutra” on Douban, a major Chinese rankings website, 57-year-old He is a longtime public security official with a Ph.D. in law who has previously been honored as one of Jilin’s “top 10 most outstanding young and middle-aged legal experts.”

“Peace Sutra” is one of his 35 literary works and is inspired by socialism with Chinese characteristics in the new era, the Communist Party’s flagship ideology, according to its Douban entry.

The 336-page paperback edition retails at 299 yuan ($42.70), significantly higher than most books in China.

According to the author, the 10 chapters are written in a mantra-like, lyrical style meant to evoke classical Chinese religious texts. Still, much of the prose appears to follow a similar formula.

Despite its repetitiveness, several state-affiliated media outlets have lavished the tome with praise.

A review published May 8 on Jilin’s official government WeChat account described “Peace Sutra” as a work of international renown, adding: “Government officials who read this book will appreciate their longstanding mission. Scholars will suddenly understand the philosophy of peace. Merchants will see their businesses flourish. And the public will enjoy peace in our times.”

The following month, party officials in Jilin hosted a charity event at which a number of Chinese intellectuals and poets were invited to compose original works in response to reading “Peace Sutra,” which were subsequently broadcast on local state television, according to the Changchun Daily, a state-owned newspaper based in the provincial capital.

Both the abovementioned articles appear to have since been taken offline.

“People used to fear sullying their good name for posterity,” wrote one reviewer. “What a waste of paper. You should feel ashamed of yourself.”

“This guy’s been working in the administration his whole life,” quipped another. “His Ph.D. thesis was on calligraphy. What’s that got to do with law?”

In recent days, He’s purported publishers have rushed to distance themselves from the book.

“Peace Sutra” appears to have been jointly released by the state-affiliated People’s Publishing House and Mass Publishing House. But on Tuesday, the former company issued a statement claiming it had never agreed to the project and would be pursuing legal action if the book had been published under its name without permission.

Mass Publishing House said in a Thursday statement that the book’s publication “has had a harmful impact on society and revealed weaknesses in the company’s political awareness,” adding that the firm would work with the relevant authorities to investigate and strengthen its publishing procedures.

As of Thursday afternoon, “Peace Sutra” was no longer available for purchase on major Chinese online book retailers.

He, whose life seems about to become less peaceful, has not commented publicly on the investigation.