By Huang Meilun and Matthew Walsh 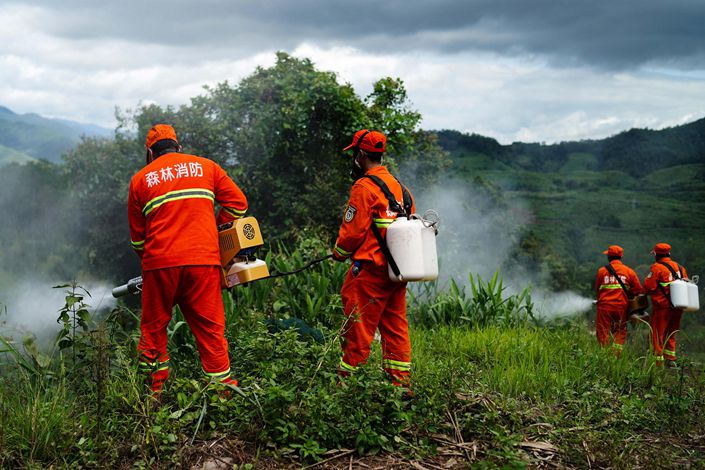 According to provincial government statistics, authorities in Yunnan have dispatched more than 50 fleets of autonomous drones to help with crop monitoring and mobilized 57,000 people to assist with pest control efforts.

Authorities in Southwest China are conducting emergency drills, spraying pesticide and deploying drones to ward off an invasion of crop-devouring locusts from neighboring countries.

The Ministry of Agriculture and Rural Affairs ordered the response after the pests were found to have damaged about 90 square kilometers (22,240 acres) of cropland over a one-month period in the border regions of Yunnan province, which lies adjacent to Myanmar, Laos and Vietnam.

The insects were found to be yellow-spined bamboo locusts, a species endemic to southern China and Southeast Asia, which feasts on major crops like rice, corn, bamboo and bananas.

The ministry said at a forum Monday that “effective prevention” had so far stopped the unwelcome critters from causing extensive crop losses in the region.

However, officials are bracing for possible widespread swarming in August, when more of the animals that hatched earlier this spring reach maturity.

According to provincial government statistics, authorities in Yunnan have dispatched more than 50 fleets of autonomous drones to help with crop monitoring and mobilized 57,000 people to assist with pest control efforts.

A person familiar with the pest control work, who requested anonymity due to the sensitivity of the issue, told Caixin on Wednesday: “The swarms are constantly moving, so every township and county has to be on their guard. Wherever they land, we have to follow them.”

Some of the work has paid off, the person said, adding that “as long as it’s not raining, we’re out killing bugs.”

But in other places, the damage has already been done. Although locusts have appeared in Yunnan every summer for the past three years, they caused particularly severe damage this July, according to a factsheet published by a research institute affiliated with the Yunnan Academy of Forestry and Grassland.

Farmers in Pu’er, a prefecture-level city in Yunnan, told Caixin that clouds of locusts descended on their fields in mid-July, causing devastation on a scale not seen for years.

Locusts are types of normally solitary grasshoppers that can start breeding in great numbers, swarming and migrating when they experience periods of drought followed by rapid plant growth.