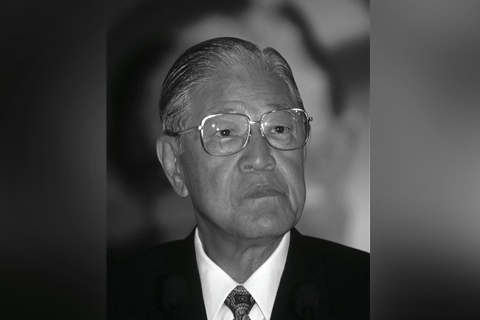 Taiwan’s former leader Lee Teng-hui died Thursday in Taipei after being hospitalized for nearly five months. He was 97.

The Taipei Veterans General Hospital said Lee died of septic shock and multiple organ failure. He was admitted to the hospital in February after a breathing problem caused by choking.

Lee was the first popularly elected leader and the first Taiwanese leader to be born on the island. He was also a controversial figure in the territory’s political arena. During his tenure as Taiwan’s top leader between 1988 and 2000, he was praised for overseeing the end of Taiwan’s martial law period and for initiating major democratic reforms, including the establishment of direct elections.

Lee’s death has prompted different reactions across the political spectrum. While Tsai Ing-wen, the current leader of Taiwan, and Mike Pompeo, the U.S. Secretary of State, mourned him for achievements in democratic reforms, Beijing has repeated its opposition to Lee’s pro-independence stance.

When asked about the death on Friday, Zhu Fenglian, China’s spokesperson for the Taiwan Affairs Office said “Taiwan independence” was a dead end. Meanwhile, China’s party-owned newspaper Global Times called him the “godfather of Taiwan secessionism” and said his death was “definitely not sad news to most people in the Chinese mainland.”

Trained as an agricultural economist, Lee started his political career in 1971 when he was introduced to Chiang Ching-kuo, the son of then Taiwan leader Chiang Kai-shek. Lee later joined Chiang’s Kuomintang party (KMT).

In 1978, Chiang Ching-kuo succeeded his late father as Taiwan’s top leader and appointed Lee the mayor of Taipei. In 1984, Lee became Chiang’s deputy. And when Chiang Ching-kuo died in January 1988, Lee became the island’s top leader. He instituted direct elections for Taiwan’s political system and became the first elected leader on the island in 1996.

In the early days of Lee’s leadership, he pushed forward a gradual relaxation of restrictions on cross-strait economic ties, supported the one-China principle and advocated the eventual reunification of China.” During his 12-year incumbency, cross-strait trade grew from $2.72 billion in 1988 to $30.52 billion in 2000, laying the foundation for the deep business ties between both sides. The figure hit a historic high of $228.08 billion last year.

But his stance swiftly shifted to pro-independence as he promoted an ambitious foreign policy to increase Taiwan’s presence in global politics, fueling tensions between Taipei and Beijing. In 1999, Lee infuriated Beijing by redefining the cross-strait ties as a “special state-to-state relationship” in an interview with German media, prompting Beijing to cut off dialogue mechanisms with Taiwan.

Lee was succeeded in 2000 by Chen Shui-bian, the Democratic Progressive Party candidate whose election ended KMT’s 55-year rule, which began when they took over the island from Japan at the end of World War II. It was also the island’s first peaceful transfer of power between different parties.

Shortly after he stepped down from office, Lee was expelled from the KMT, of which he was the chairman, for his role in founding the pro-independence Taiwan Solidarity Union. He also showed support to the pro-independence Democratic Progressive Party, which is now the island’s ruling party. Lee was widely believed to have given a boost to the political career of Tsai, who had served as his policy aide, by recommending her to his successor Chen.

Lee’s political stance has stirred up protests from not only on the mainland, but also in Taiwan. In 2015, then Taiwanese leader Ma Ying-jeou slammed Lee for saying the Diaoyu islands belong to Japan and asked him to apologize. But in Lee’s last years, he was mostly respected by his counterparts as he stepped away from politics. Before his death, Lee was visited by Tsai, Taiwan’s vice leader Lai Ching-te and chief administrator Su Tseng-chang in hospital.

Once a Communist Party member

Born Jan. 15, 1923, in rural Taipei, Lee spent his childhood as Taiwan was under Japanese rule. In 1943, he earned a scholarship to study agricultural economics at Kyoto Imperial University in Japan. Two years later, he joined the Imperial Japanese Army and served as a junior officer in World War II.

The Japanese influence on his early years made him a vocal supporter of many policies of the Japanese government, including Tokyo’s claim to sovereignty over the Diaoyu Islands in the East China Sea, irritating both Beijing and Taipei.

His visits to the controversial Yasukuni Shrine in Tokyo, which honors Japanese officers who were convicted of war crimes during the war, also upset many Asian governments. Lee’s older brother, a Japanese naval officer who was killed in the war, was also commemorated there.

Lee interacted frequently with Tokyo’s politicians and media after he took office. Despite the controversy among Taiwanese, Lee in 2007 received a prize in memory of Shinpei Goto, Japanese imperial colonial administrator. Lee once criticized Tsai’s administration for not completely lifting the ban on agricultural imports from Japan’s nuclear-disaster-affected regions to Taiwan and causing Japanese Prime Minister Shinzo Abe to be “disgraced.”

In 1946, Lee returned from Japan to continue his studies at National Taiwan University, where he began to learn about Marxism. Meanwhile, he earned a bachelor’s degree in agricultural science. As a student, he once secretly joined the Chinese Communist Party and attended protests in the February 28 incident in 1947. But facing crackdowns by the KMT, Lee soon left the party. In commentaries published in 1995, Chinese state media People’s Daily and the Xinhua News Agency revealed Lee history with the party, calling him a “betrayer."

"A student at Chiang Ching-kuo’s school"

In 1952 and 1964, Lee won scholarships to study in the U.S. He earned a doctorate in agricultural economics at Cornell University in 1968. Lee worked as an agricultural economist at the U.S.-sponsored Joint Commission on Rural Reconstruction in Taiwan before joining the government. Decades later, Lee went back to Cornell University in 1995 and became Taiwan’s first incumbent leader to visit the U.S., which irritated Beijing and sparked the third Taiwan Strait Crisis.

Lee was unusual for Chiang Ching-kuo’s cabinet as he had no political background or experience by the time he joined as a technocrat. After Chiang was installed as leader in 1978, he appointed Lee as mayor of Taipei and then the governor of the island province three years later.

In 1984, Chiang selected Lee to be vice leader and praised him for his “national consciousness.” Lee said he was a “student of the Chiang Ching-kuo’s school” because he once had up to 156 separate conversations with Chiang. When Chiang visited Lee to congratulate him on his appointment, Lee trembled so much that he only dared to sit in one-third of the chair and kept rubbing his knees with his hands, according to Taiwan media. Later on, this gesture was often used by Taiwanese to contrast with the arrogant and outgoing style of Lee after he took power.

Lee became Taiwan’s leader in 1988 after Chiang’s sudden death. According to a long-time aide of Chiang, Chiang spoke highly of Lee when seeing his answers to questions about cross-strait relations: In response to a parliamentary question in 1983, Lee said: “Chinese history has not abandoned Taiwan. How can Taiwan be separated from the Chinese mainland?”