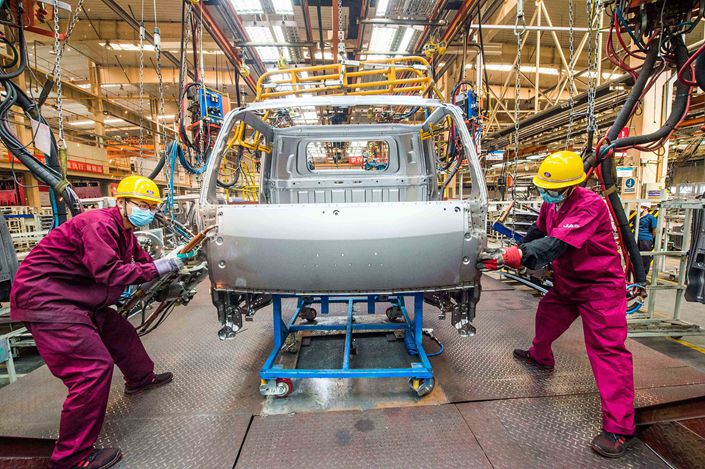 Workers assemble trucks at a factory in East China's Shandong province, May 31.

Manufacturing activity in China continued to recover from the fallout of the Covid-19 pandemic in July as businesses reported the fastest expansion of output and new orders since January 2011.

The Caixin China General Manufacturing Purchasing Managers’ Index (PMI), which gives an independent snapshot of the country’s manufacturing sector, rose to 52.8 from 51.2 in June, reaching the highest since January 2011, a report released Monday showed. A number above 50 signals an expansion in activity, while a reading below that indicates a contraction.

The figure adds to evidence that China’s economic recovery may continue in the second half of 2020. China’s GDP grew 3.2% year-on-year in the second quarter, returning to growth after a record 6.8% contraction in the first quarter.

China’s official manufacturing PMI, released (link in Chinese) on Friday, rose to 51.1 in July from 50.9 the previous month. The official PMI polls a larger proportion of big companies and state-owned enterprises than the Caixin PMI, which is compiled by London-based data analytics firm IHS Markit Ltd.

Some economists believe that China’s economic recovery should stay on track in the second half of the year, assuming that there is no large coronavirus outbreak in the country. Bur some others estimate growth will decelerate compared with the second quarter, saying that pent-up demand could lose steam, a surge in medical exports could fade, and tensions between China and the U.S. may intensify.

The breakdown of the July Caixin PMI showed that both supply and demand rose over the previous month, as the output subindex expanded for the fifth month in a row, reaching a nine-and-half-year high along with the subindex of total new orders.

Manufacturers remained optimistic about their business outlook over the next 12 months. “Growth forecasts were underpinned by expectations that economic activity and client demand will continue to recover from the pandemic,” IHS Markit said in a statement accompanying the PMI data.

Export and employment remained the factors dragging down the manufacturing recovery. New export orders continued falling last month, albeit at a slower pace, amid subdued overseas demand as the pandemic had not stopped raging in China’s trade partners like the U.S.

Employment shrank for the seventh month in a row in July, although the contraction was marginal. “The survey found that some companies increased recruitment to meet production needs, but some others remained cautious and laid off workers to reduce costs,” said Wang Zhe, a senior economist at think tank Caixin Insight Group.

Inflationary pressure picked up, as growth in both input costs and output prices accelerated, according to the survey.