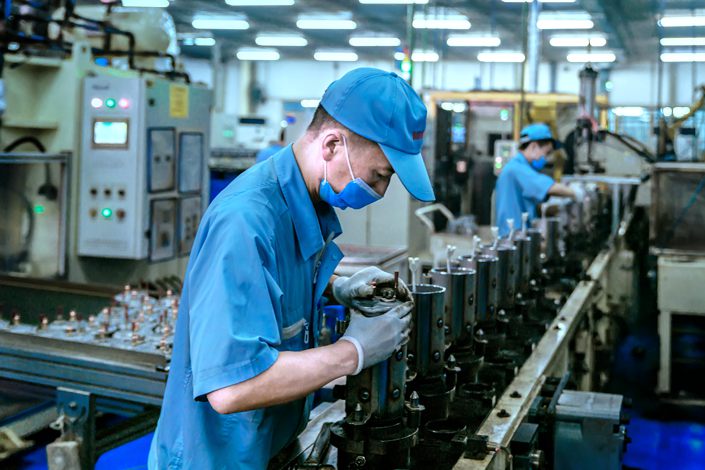 A worker makes air conditioning equipment at a factory in Mianyang, Sichuan province, on June 5.

Manufacturing activity in China continued to rebound in June driven by rising domestic demand, adding to evidence that the nation’s economy is recovering from the disruption caused by the Covid-19 pandemic.

The Caixin China General Manufacturing Purchasing Managers’ Index (PMI), which gives an independent snapshot of the country’s manufacturing sector, rose to 51.2 from 50.7 in May, a report released Wednesday showed. A number above 50 signals an expansion in activity, while a reading below that indicates a contraction.

The reading, the highest since December, adds to evidence that the economy is recovering from the coronavirus epidemic which led to the lockdown of vast swathes of the economy. Government reports last month showed investment, industrial output and consumption all improving in May from April. A separate manufacturing PMI report released (link in Chinese) by the National Bureau of Statistics on Tuesday, also showed an improvement, rising to 50.9 from 50.6 the previous month. The official PMI polls a larger proportion of big companies and state-owned enterprises than the Caixin PMI, which is compiled by London-based data analytics firm IHS Markit Ltd.

“Since mid-March, China’s economy has staged an impressive comeback, bolstered by pent-up demand, a catch-up in production, a surge in medical product exports and stimulus in both China and other major economies that has bolstered demand for goods made in China,” economists at Nomura International (Hong Kong) Ltd. wrote in a note on Monday. They raised their estimate for year-on-year growth in gross domestic product (GDP) for the second quarter to 2.6% from 1.2%.

The NBS is scheduled to release first-half GDP and investment figures along with monthly numbers for industrial output and retail sales on July 16. Official data show the world’s second-largest economy contracted 6.8% year-on-year in the three months through March 2020, the first quarterly contraction since the data series began in 1992.

The breakdown of the June PMI showed the improvement in the headline number was mainly driven by domestic demand, with the subindex for total new orders rising above 50 for the first time since January. But new export orders continued to fall amid subdued overseas demand as the pandemic continued to wreak havoc on China’s top export markets such as the U.S. and Europe. The output subindex expanded for the fourth month in a row, though at a slower pace than in May.

Manufacturers were increasingly optimistic about the business outlook, with the gauge of output expectations hitting the highest since February.

However, the subindex measuring employment weakened and remained in contractionary territory for the sixth consecutive month, underscoring Premier Li Keqiang’s focus on protecting and creating jobs in his annual work report to the delayed meeting of the National People’s Congress, China’s legislature, in May.

“Manufacturers remained cautious about increasing hiring,” said Wang Zhe, a senior economist at Caixin Insight Group. “Some companies still had layoffs planned and were in no hurry to hire new workers to fill vacancies.”

Official data also show the job market is still under pressure, indicating that the economy is far from fully recovered. In May, the surveyed urban unemployment rate in 31 large cities rose to 5.9%, the highest since the data series began in June 2013. The country’s national surveyed urban unemployment rate remains elevated, despite slipping to 5.9% in May from 6% the previous month.

Many analysts believe the real unemployment situation could be even worse as the current employment survey excludes migrant workers who live in the countryside but move to work in urban areas, and some self-employed people. Many migrant workers have lost their jobs as a result of the pandemic and slowing economic growth and have returned to countryside, with many finding it hard to secure new employment and make ends meet.