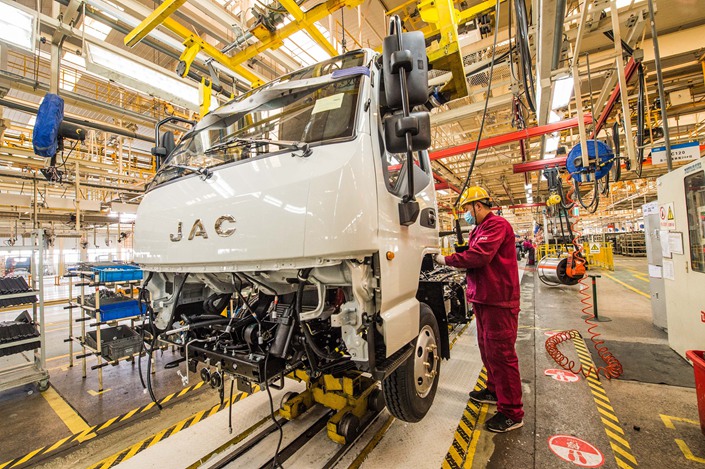 Manufacturing activity in China rebounded in May driven by a jump in output as companies resumed production after the coronavirus lockdown in the first quarter, indicating the nation’s recovery from the pandemic is gathering pace.

The Caixin China General Manufacturing Purchasing Managers’ Index (PMI), which gives an independent snapshot of the country’s manufacturing sector, rose to 50.7 from 49.4 in April, a report released Monday showed. A number above 50 signals an expansion in activity, while a reading below that indicates a contraction.

The PMI reading was the highest since January, before the Covid-19 outbreak took hold in the country, and adds to evidence the country’s vast manufacturing sector is regaining momentum after economic data for April — including fixed-asset investment, industrial output and retail sales — showed the slump in the first quarter is being reversed. Gross domestic product (GDP) fell by 6.8% year-on-year in the first three months of 2020, the first quarterly drop since records began in 1992.

Premier Li Keqiang on Thursday emphasized the government’s determination to achieve economic expansion this year even though it has abandoned setting a GDP growth target for the first time since 2002. “If our key targets, including protecting jobs, livelihoods and market entities can be achieved, we will be able to achieve economic growth this year, and we will strive to achieve a quite substantial growth rate to drive China’s economy,” Li said at a press conference in Beijing on Thursday at the end of the annual session of the National People’s Congress (NPC).

The breakdown of the PMI showed the improvement in the headline number was driven by production, with the output subindex reading rising to its highest since January 2011. That was partly a reflection of efforts by companies to rebuild inventories as the gauge of finished goods stocks fell below 50. Manufacturers’ confidence also improved, with the gauge of business expectations showing a sharp recovery to just below March’s level after a large decline in April.

However, other components of the index showed demand overall remained subdued. New orders contracted for the fourth straight month although the subindex reading improved to just below the 50 mark, and the slump in export orders continued, weighing on overall demand. A lack of new work led to the first contraction in backlogs of orders since February 2016, the survey showed.

“Supply was generally stronger than demand in the manufacturing sector, as production continued its expansion amid a broader economic rebound while demand had yet to recover,” Wang Zhe, a senior economist at Caixin Insight Group, said in the report. “Sluggish exports remained a big drag on demand as the virus continued spreading overseas.”

Data from the customs bureau showed goods exports unexpectedly rose in April after a three-month decline as companies cleared backlogs of orders that had built up during and after the domestic lockdown. But economists have warned that the rebound is unlikely to last as global demand will remain weak at least in the short term because of the pandemic.

Although the employment subindex in the PMI showed the highest reading since January, it remained below 50 for the fifth straight month, underscoring the government’s concern about the potential for a rise in unemployment. Premier Li said on Thursday that efforts to stabilize employment will be stepped up and the government will take all possible measures to secure existing jobs.

“Stabilizing the job market is a top priority on policymakers’ agenda this year, as shown in last month’s government work report,” Wang said. “Boosting employment is not an easy task.”

As part of the government’s program to bolster the economic recovery and create jobs, Li unveiled an additional stimulus and relief package in his work report to the NPC, with a focus on helping businesses and individuals while also support investment.

The overall budget deficit is targeted to increase by 36% to 3.76 trillion yuan ($527 billion), and the central government will issue 1 trillion yuan of “anti-pandemic” special treasury bonds to fund the relief package, according to the government work report. It will also allow local governments to issue 3.75 trillion yuan of special-purpose bonds for infrastructure investment, almost 75% higher than 2019’s figure.

Relief policies “are not focused on large infrastructure projects,” Li said at the press conference. “This is because big changes have taken place in China’s economic structure, where consumption is now the primary engine driving growth,” he said.

China’s official manufacturing PMI, released (link in Chinese) by the National Bureau of Statistics on Sunday, fell to 50.6 in May from 50.8 the previous month. The official PMI polls a larger proportion of big companies and state-owned enterprises than the Caixin PMI, which is compiled by London-based data analytics firm IHS Markit Ltd.