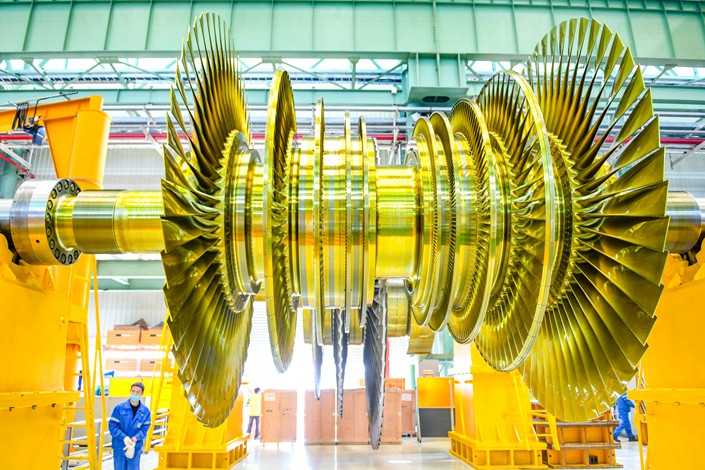 A steam turbine rotor produced by a Shanghai heavy-equipment maker.

China abandoned its decades-old practice of setting a target for annual economic growth, prioritizing instead the goals of stabilizing employment, alleviating poverty and preventing risks in 2020, as the impact of the Covid-19 pandemic made it almost impossible to fix an expansion rate this year.

“I would like to point out that we have not set a specific target for economic growth this year,” Li said. “This is because our country will face some factors that are difficult to predict in its development due to the great uncertainty regarding the Covid-19 pandemic and the world economic and trade environment.” Li said other targets had also been adjusted to reflect economic conditions in the wake of the Covid-19 outbreak.

“This year, we must give priority to stabilizing employment and ensuring living standards, win the battle against poverty, and achieve the goal of building a moderately prosperous society in all aspects,” Li said.

He reiterated pledges made earlier by the State Council and the Politburo to conduct a more proactive fiscal policy and more flexible monetary policy, continue to lower interest rates, and cut taxes and fees to help small businesses weather the economic slowdown. Policymakers have repeatedly said there will be no “flood-like stimulus” but Li said the government aimed to accelerate growth of the M2 money supply and total social financing, the broadest measure of credit and liquidity, by “notably higher” rates than in 2019, suggesting monetary policy will be loosened further to support the economy.

Before the Covid-19 outbreak, many economists were expecting China to set a GDP growth target of 6% to 6.5% to reflect the gradual slowdown in the pace of expansion over the past few years. Growth slid to 6.1% in 2019 from 6.7% in 2018. But the devastation caused by the coronavirus epidemic — which saw the economy contract 6.8% year-on-year in the first quarter — has thrown those forecasts out of the window.

Speculation had grown before the NPC meeting that the government would ditch the growth target although there was pushback from many inside policymaking circles and many economists had estimated leaders would settle on a goal of 2% to 3%.

The blow to the economy this year has raised questions over whether the country can reach a goal set at the 18th Party Congress in 2012 to double GDP in 2020 over the level achieved in 2010 as part of a broader aim of “completing the building of a moderately prosperous society in all respects.”

Some economists had estimated that China could meet its goal if GDP grew by 5.5% in 2020, but that pace now looks out of reach. Economists with Macquarie Group Ltd. wrote in a Friday research note that as the government vowed to keep the surveyed urban unemployment rate within 6% this year, that contained an implicit GDP growth target of 2% to 3% given the close relationship between economic growth and the labor market.

Zhu Chaoping, an analyst with JPMorgan Asset Management, said not setting a specific quantitative GDP growth target will help prevent excessive short-term stimulus and give policymakers more room to adjust the pace and intensity of their supportive policies as the economy faces a high degree of uncertainty. Policymakers may still be inclined to avoid large-scale strong stimulus similar to the one during the global financial crisis in 2008 to avoid asset bubbles, Zhu said.

In his work report, Li said that not setting a specific target for economic growth “will enable all of us to concentrate on ensuring stability on the six fronts and security in the six areas.” The six fronts refer to employment, finance, foreign trade, foreign investment, investment and expectations, while security refers to safeguarding employment, people's livelihoods, the development of market entities, food and energy security, the stable operation of industrial and supply chains, and the smooth functioning of society.

While the government may have abandoned the GDP growth target, there were plenty of other targets and estimates in the work reports of the premier and the Ministry of Finance that underscore the depth of the economy’s problems and the challenges policymakers face in supporting the economy.

The budget deficit is slated to rise to 3.76 trillion yuan this year, 36% higher than in 2019, while the target for the deficit as a percentage of GDP will increase to “more than 3.6%” from last year’s 2.8%, exceeding the 3% threshold which has long been seen by policymakers as a red line that must not be crossed.

Although the State Council had previously flagged the sale of special treasury bonds this year, the first such issuance since 2007, the Ministry of Finance’s work report specified a figure of 1 trillion yuan. The quota for local government SPB was set at 3.75 trillion yuan, almost 75% higher than 2019’s 2.15 trillion yuan, a reflection of the government’s strategy to support economic growth by boosting state-led infrastructure investment.

The government aims to keep the surveyed urban unemployment rate within 6%, up from 5.5% in 2019, reflecting the increase in the number of people who have already lost, and may still lose, their jobs as the economy continues to be hit by the impact of the coronavirus pandemic. The target for job-creation in urban areas was lowered to “over” 9 million from over 11 million in 2019, a recognition of the tough economic climate.

Li pledged savings of more than 2.5 trillion yuan this year for enterprises. Tax breaks due to expire in June will be extended until the end of the year and corporate income tax payments by small businesses and the self-employed will be postponed until next year. The government is also stepping up efforts to increase financial support for smaller companies which it says create most of the jobs in the economy. Large commercial banks have been told to increase inclusive finance lending to micro and small businesses by more than 40% this year, Li said.

That compares with a requirement last year for a jump of 30%.

Nevertheless, there was no relief for the embattled real-estate development sector, with Li reiterating the government’s mantra that “houses are for living in, not for speculation.”

This story has been corrected to show that this is the first time a GDP growth target has been omitted from a government work report since 2002, not 1994.

This story has been updated to clarify that this year’s tax and fee cuts are expected be worth more than 500 billion yuan.