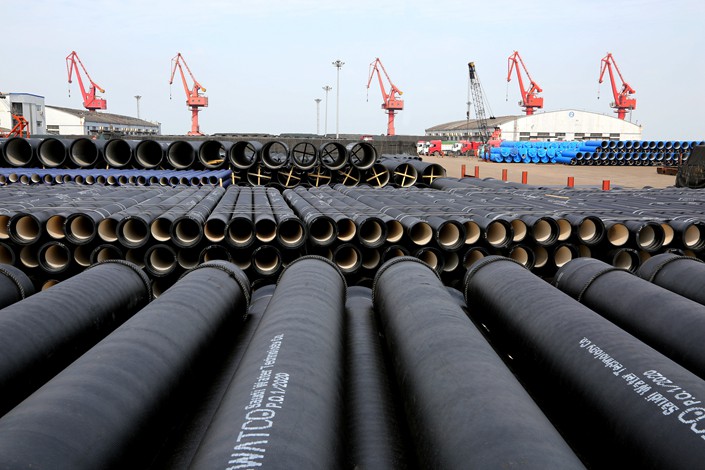 China’s economy shrank 6.8% year-on-year in the first three months of 2020, the first quarterly contraction since the data series began in 1992, as the coronavirus pandemic devastated manufacturing and consumption, official figures showed Friday.

The decline (link in Chinese) in gross domestic product (GDP) in the world’s second-largest economy compared with growth of 6.0% in the fourth quarter of 2019 and the median forecast for a 7.0% drop in a Caixin survey (link in Chinese) of analysts. The last time China reported a drop in GDP was in 1976, before quarterly data began, when the economy contracted 1.6% for the full year.

Economic growth was already slowing before the coronavirus outbreak started spreading across the country in January. But activity collapsed in February and early March as the government ordered millions of companies to shut down and put dozens of cities into lockdown to prevent the spread of the disease which government data show has claimed 4,362 lives in China alone as of Thursday. Businesses started to reopen in mid-March as the outbreak was contained and domestic demand began showing signs of recovery. But the economy now faces a second shock as overseas demand slumps and disruption to global supply chains hits production.

“Covid-19 has been a public health emergency, and the outbreak has been the fastest-spreading and most contagious and required the most severe prevention and control measures since the founding of the People’s Republic of China,” Mao Shengyong, spokesman of the National Bureau of Statistics (NBS), said at a briefing(link in Chinese) to discuss the GDP data Friday. The measures the government needed to take to control the epidemic “inevitably meant that there was an economic price to pay in the short term,” he said.

Monthly economic data show that after plunging in January and February, retail sales, industrial output and fixed-asset investment all showed signs of recovery in March as businesses were allowed to reopen and people returned to work.

Fixed-asset investment, a key driver of domestic demand that includes government-driven infrastructure spending, shrank 16.1% year-on-year (link in Chinese) in the first quarter, narrowing from a 24.5% drop in the first two months, NBS figures show. The decline in infrastructure investment moderated to 19.7% year-on-year from a 30.3% slump in the January-to-February period, an improvement analysts at Capital Economics say suggests the government’s fiscal stimulus measures have started to kick in.

Nevertheless, some economists are forecasting that any economic recovery driven by domestic demand will be moderate and slow due to a collapse in overseas demand driven by widespread lockdowns and the risk of a resurgence of the Covid-19 outbreak in China itself.

“We think that the worst is behind us as the coronavirus outbreak has been contained in China,” economists Timmy Wu and Louis Kuijs of Oxford Economics wrote in a research note. “But lingering fear of the virus and uncertainty over income and job losses will weigh on consumption in the coming months…. Sliding external demand will be a major drag, as much of the rest of the world falls into recession.”

China’s surveyed urban unemployment rate remained elevated in March, although it inched down to 5.9% (link in Chinese) from 6.2% the previous month, NBS data show.

Economists at Nomura International Ltd. in Hong Kong said they expect year-on-year GDP growth to remain negative in the second quarter, although the drop will narrow to 0.5%. Iris Pang, chief Greater China economist at ING Bank, is more pessimistic, estimating a second-quarter contraction of 3.1% with growth only returning in the fourth quarter of the year.

Many economists forecast that the government will be forced to continue its monetary easing and fiscal stimulus to support the economy and stabilize the jobs market. A meeting of the State Council, China’s cabinet, on Tuesday called for more efforts to implement the fiscal policies already announced, increase financial support for the real economy and smaller companies and ease cost pressures on businesses. It also pledged to boost employment for college graduates, especially in Hubei, the epicenter of the epidemic. The government’s Financial Stability and Development Committee, which met on Wednesday, also called for policymakers to increase the intensity of countercyclical macroeconomic adjustments, while the People’s Bank of China (PBOC) issued a statement on Thursday pledging to continue channeling funds into the real economy through measures such as targeted cuts in banks’ reserve requirement ratios.

Economists at Nomura say the government is likely to deliver a large stimulus package soon to combat what it they described as the worst economic downturn in decades, with most of the financing to be provided by the PBOC.

“Specifically, we expect China’s actual broad fiscal deficit to rise to above 13% of GDP this year, which would imply a stimulus package worth around 10% of GDP”, some 10 trillion yuan, they wrote. “We believe most of China’s stimulus will likely be financial relief to its own enterprises, banks and households, and the lion’s share of the package will likely only offset slumping fiscal and land sales revenues.”

Oxford Economics analysts also forecast more policies to support the recovery, but any stimulus will be much smaller than the one rolled out during the 2008 financial crisis. Measures are likely to include “relief in taxes and social security contributions, employment and consumption subsidies, infrastructure investment, cuts in interest rates and reserve requirement ratios, and lending support for struggling borrowers,” they wrote, adding that the overall fiscal deficit will increase to around 8% of GDP this year from 5.5% in 2019.