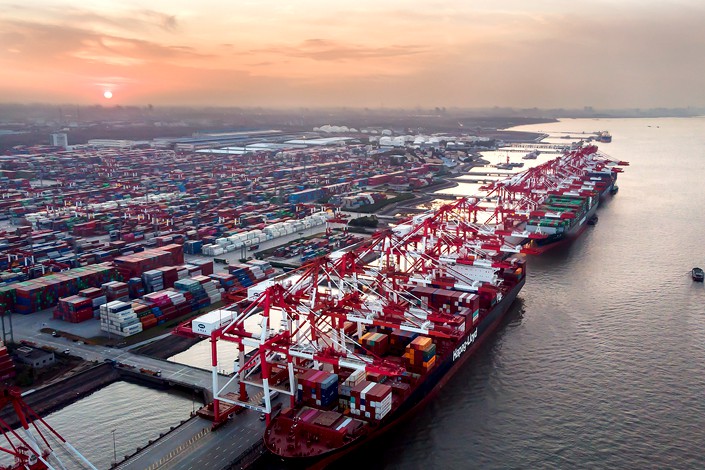 China’s exports and imports fell by less than expected in March, but the customs administration warned that foreign trade faces growing headwinds as the Covid-19 pandemic increases downward pressure on the global economy.

Merchandise exports dropped 6.6% year-on-year to $185.2 billion last month, data (link in Chinese) released Tuesday by the General Administration of Customs showed. The decline was an improvement on the 17.2% drop in the first two months of the year and was better than the median forecast for a 14.2% decrease in a Caixin survey of economists (link in Chinese). Imports slid 0.9% year-on-year to $165.3 billion, easing from a 4% decline in January and February combined and beat the median forecast for an 8.3% slump in Caixin’s survey. The customs administration has stopped releasing monthly data for January and February and instead issues combined data for the two months, falling into line with the National Bureau of Statistics.

The milder-than-expected decline in exports was partly due to the shipment of backlogs of delayed orders as factories that had shut down during the coronavirus epidemic resumed work, Li Kuiwen, a spokesman for the customs administration, said at a briefing (link in Chinese) Tuesday.

Li said China's foreign trade is resilient and competitive, and the government has taken steps to try and minimize the impact of the pandemic on Chinese exports. Even so, he added his voice to official concerns about the outlook.

“As the global pandemic continues to spread, the downside risks to the world economy have intensified and uncertainty and instability have significantly increased,” Li said. “China will face an export shock as global demand shrinks, and problems such as declining export orders are emerging. The difficulties facing our foreign trade development cannot be underestimated.”

The decline in imports was largely due to a plunge in energy prices, Louis Kuijs, head of Asia economics at research firm Oxford Economics, wrote in a research note after the data release. Customs administration data show that oil imports amounted to $16.7 billion in March, 10% lower than a year earlier, although by volume, purchases were 4.5% higher.

The coronavirus pandemic has dealt yet another blow to China’s trade which was already suffering from a damaging tariff row with the U.S. –– customs administration data show that exports to the U.S. sank 25.2% in the first quarter and imports dropped 3.7%.

The initial shockwave from the domestic outbreak of Covid-19 hit exports in late January, February and early March as factories across the country were closed and workers were told to stay at home. But as the economy reopened and manufacturers resumed operations, exporters suffered a second blow. Overseas buyers started to cancel or delay orders as the spread of the coronavirus across the world sent foreign demand plummeting and severely disrupted the global logistics industry.

A survey by the China Cotton Textile Association revealed some member companies reported a 50% decline in orders from Europe and the U.S. by late March, and the organization forecast the impact of the pandemic on Chinese clothing exporters may last four to six months.

Foreign trade is facing “severe, unprecedented challenges,” Ren Hongbin, assistant minister of commerce, told a briefing (link in Chinese) on Friday. “The global spread of the pandemic has exerted a huge impact on the global economy and trade,” he said. Recent surveys conducted by the Ministry of Commerce show that companies are faced with many problems “including cancellation or delay in orders, a lack of new orders, and bottlenecks in logistics and transportation,” he added.

Although markets around the world were cheered by better-than-expected trade data for March, analysts warn that the outlook is grim as the pandemic continues to wreak havoc on economies around the world and hundreds of millions of workers lose their jobs.

“Despite the rebound, we believe trade growth will get much worse” in the second quarter, economists at Nomura International Ltd. in Hong Kong wrote in a report. “Since the Covid-19 outbreak didn’t escalate in Europe and North America until late February, its impact on China’s exports to those major destinations will become more apparent in the second quarter especially in April and May,” they said.

Exports could drop by around 30% year-on-year in the second quarter and import growth will likely remain weak as commodity prices remain sluggish and domestic demand is slow to recover, they said.