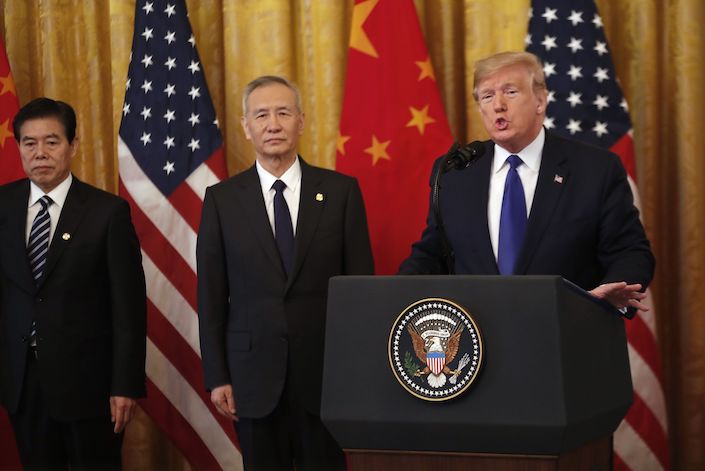 After 14 rounds of negotiations stretching over almost two years, the U.S. and China Wednesday signed an 88-page phase one trade deal covering a range of issues from agriculture purchases to financial services, intellectual property, technology transfer and foreign exchange.

At the White House signing ceremony, U.S. President Donald Trump called the negotiations “tough, honest, open and respectful” and the result “historical” and “momentous.” U.S. lead negotiator Robert Lighthizer told the president the job was “tougher” than he expected. Both parties called the deal “fair and reciprocal.”

Trump has already started attributing the record U.S. stock market boom to the deal with China, followed by the Senate passage of a new North American trade pact. The accords give him some ammunition for his re-election campaign as he faces an impeachment trial in the U.S. Senate.

And yet, after sifting through every detail of the 88 pages, some experts concluded that the deal offers little but a big import order that China needs anyway and reaffirmation of some commitments China had already made or acceleration of opening-up measures it already started. At the same time, the deal does remove trade uncertainties for now, which is beneficial for both counties, experts say.

Jacob Kirkegaard, a senior fellow at the Peterson Institute for International Economics, said a key agreement is that both parties will stop increasing tariff frictions. He said he didn’t expect Trump to bring up any new economic or trade demands with China before the U.S. election in November.

No date has been set for the start of further negotiations, but Trump said his goal is to finish a complete trade deal after the election, indicating an expectation of a prolonged phase two negotiation. But a relatively slow phase two negotiation doesn’t mean that tensions and confrontations will return any time soon, said Martin Chorzempa, a research fellow at the Peterson Institute.

The first chapter, making up about one-fifth of the agreement, covers intellectual property, a central issue in the trade talks. One section regarding new-drug patents, which people in the industry say is the biggest step China has made, could particularly benefit global pharmaceutical companies. China promises to improve the country's protection and enforcement of drug-related intellectual property rights and to allow drug patent applicants to rely on supplemental data to satisfy requirements relevant for patentability.

In the past, China didn’t allow the use of such supplemental data, which caused years of delay for new foreign drugs to enter China’s market. The new system will not only make the Chinese market more attractive but also will create new incentives for drug innovation in China, said Jia Ping, a senior researcher at Huazhong Science & Technology University.

China also pledges to take actions similar to American law to resolve patent disputes over generic drugs, step up enforcement efforts against counterfeit medicines and share information with U.S. regulators on such actions.

$200 billion of purchase orders from airplanes to crude

As part of the phase one deal, China agrees to buy no less than $200 billion of American goods and services above what it bought in 2017 over the next two years, including $77.7 billion in manufactured products such as airplanes, cars, pharmaceuticals, machines and equipment; $32 billion of agricultural goods; $52.4 billion of energy products; and $37.9 billion of services.

Energy accounts for more than a quarter of the total of additional imports. Crude oil and liquefied natural gas (LNG) are expected to be the major part of Chinese purchases to be expanded. Already the world’s largest importer of crude oil and natural gas, with $240.4 billion of crude imports in 2019, China has enough market capacity to absorb the additional shipments, according to Liang Ming, director of the Institute of International Trade, a research unit under China’s Ministry of Commerce.

Compared with imports from Australia and Qatar, LNG from the U.S. often costs Chinese importers less, said Dong Xiucheng, an international trade professor at the University of International Business and Economics in Beijing. But distance and higher freight costs make American crude oil less competitive than supplies from the Middle East, said an oil industry source.

Most U.S. petroleum is light crude, which has low density and usually costs more compared with heavy crude because it produces a higher percentage of gasoline and diesel fuel. China’s refineries in the coastal regions are mostly designed to process heavy crude. Switching to U.S. light crude may affect the refineries’ product structure, the oil industry source said.

Agricultural products are another main component of China’s purchase agreement. Beijing is to buy an additional $32 billion of U.S. agriculture products above the 2017 baseline of $24 billion over the next two years. That includes $12.5 billion this year and $19.5 billion in 2021.

In September, China exempted some agricultural products from additional tariffs including pork and soybeans. Although the phase one deal doesn’t include a detailed soybean purchase plan, China’s imports of the product have already recovered in anticipation of improved trade relations.

China is expected to import 90 million tons of soybeans this year. If half of that comes from the U.S., soybean purchases alone will amount to $18 billion, and China’s market has enough capacity to absorb even more, a U.S. soybean industry participant said.

Further opening of the financial sector has long been on China’s agenda. The trade deal reaffirms China’s moves to grant greater access to foreign financial institutions and expedites certain timetables.

But the speedup can hardly be counted as a concession by China as the country was accelerating its efforts even when the trade talks were at a standoff. In July, the Financial Stability and Development Committee, a financial regulatory body under the State Council, ordered an expedited timetable for removing limits on foreign ownership of financial companies to 2020 from 2021. Later, the securities regulator set different deadlines for various sub-sectors: Jan. 1 for futures businesses, April 1 for fund management enterprises and Dec. 1 for securities companies.

The agreement also provides for China to allow U.S. institutions to apply for asset management company licenses that would permit them to acquire nonperforming loans directly from Chinese banks, beginning with provincial licenses. The provision thus grants American asset managers access to China’s distressed assets market, a business that they have long sought to tap. When granting new licenses, China promises to treat U.S. applicants the same as Chinese companies.

As China’s corporate default crisis shows signs of spreading from domestic bonds to offshore bonds, this provision might provide opportunities for foreign money managers to participate in distressed debt transactions in China. About $3.6 billion of bonds went into default last year, up from $3.3 billion the year before, according to data compiled by Bloomberg.

Even before the trade deal, China pledged to allow foreign ratings companies to operate independently in China rather than through joint ventures. In January 2019, the central bank approved the registration of S&P Global’s Beijing-based wholly owned unit, making it the first and only foreign-owned company allowed to conduct credit rating business on the mainland. Moody’s Investor Service and Fitch Ratings are still awaiting approval of their applications.

In the trade deal, China promises to review and approve any pending license applications of U.S. credit rating service suppliers within three months after the effective date of the trade agreement. The U.S. also affirms that it accords nondiscriminatory treatment to Chinese credit rating companies.

Not much new promise in tech transfer

Forced technology transfer has been another thorny issue central to U.S. grievances against China. The U.S. government alleges that American companies have been coerced to transfer technology in exchange for access to the Chinese market, a claim the Chinese government denies. But the section of the trade deal addressing tech transfer is much the same as what China agreed to when it joined the World Trade Organization (WTO) in 2001, experts say.

“More additional details were laid out in the deal, which could make it more useful for actual implementation in the event of a technology transfer dispute,” said Zhu Huan, a researcher at the Washington-based think tank Cato Institute. “But it is hard to tell what is new in terms of U.S. demands.”

Meanwhile, the trade deal seems similarly unlikely to alleviate U.S. sanctions on Chinese businesses, including telecom giant Huawei and artificial intelligence startup SenseTime. They were blacklisted last year based on national security concerns, barring them from sourcing U.S. technologies. Though the trade deal does address tech transfers, it does not mention national security.

“That means the odds that the U.S. will lift sanctions on Chinese firms due to the deal are low,” Zhu said.

Overall, even though the partial trade deal doesn’t resolve all the issued between the two countries, it’s a good start, as China’s Vice Premier Liu He said Wednesday at the signing ceremony.