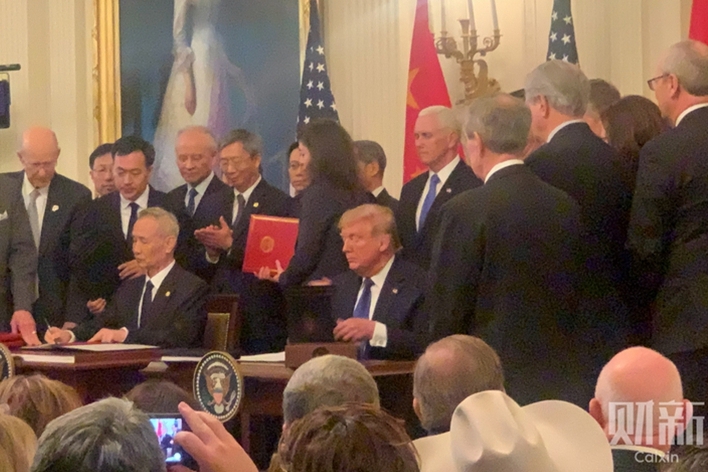 U.S. President Donald Trump and Chinese Vice Premier Liu He sign the China-U.S. phase one trade deal at a ceremony in the East Room of the White House in Washington on Wednesday. Photo: Zhang Qi/Caixin

The long-awaited phase one U.S.-China trade deal touches on a thorny issue central to U.S. grievances against China — forced technology transfer. The U.S. government alleges that American companies are coerced to transfer technology in exchange for access to the Chinese market, a claim the Chinese government denies.

However, the section of the agreement addressing tech transfer is much the same as what China agreed to when it joined the World Trade Organization (WTO) in 2001, experts say.

“More additional details were laid out in the deal, which could make it more useful for actual implementation in the event of a technology transfer dispute,” said Zhu Huan, a researcher at Washington D.C.-based think tank Cato Institute, “But it is hard to tell what is new in terms of U.S. demands,” she said.

The deal text said both sides are forbidden to adopt administrative means, such as licensing requirements, to pressure technology transfers from the other side, much like the agreement China signed to join the WTO.

As part of the agreement, China and the U.S. also agreed not to use political means to pressure others to use or favor technology owned by or licensed to the other side. Again, China made a similar pledge in its WTO accession, promising to eliminate and cease to enforce “local content and export or performance requirements made effective through laws, regulations or other measures.”

The U.S. has long complained that China’s government turns a blind eye to intellectual theft by Chinese companies, and itself uses political means to force technology transfer from U.S. firms. Intellectual property protection is widely seen as one of the most significant obstacles hindering the two sides from making a deal since the trade war started.

Still, no company has yet filed a WTO intellectual property case involving China, which experts say could be due to their aversion to offending the Chinese government and losing market access.

A report released last year by the American Chamber of Commerce in China, showed 16% of U.S. firms in China felt negatively impacted by tech transfer rules. Those in areas such as technology and equipment-making said they have been more impacted than those in areas such as services and consumer goods.

A typical example comes from a 2015 policy on electric vehicle manufacturing rolled out China’s Ministry of Industry and Information Technology. The ministry stipulated that companies would only be entitled to government subsidies if they used batteries sourced from a list of approved battery providers, but only included domestic battery-makers on the list, effectively banning foreign battery-makers from China’s electric vehicle market. China scrapped the rule last year after heavy international criticism.

Such practices have continued despite China’s WTO commitments, so it seems unlikely they will be significantly affected by the phase one trade deal.

On the other hand, the trade deal seems similarly unlikely to alleviate U.S. sanctions on Chinese firms. Some leading Chinese tech companies, including telecom giant Huawei and artificial intelligence startup SenseTime, were blacklisted last year based on national security concerns, barring them from sourcing U.S. technologies.

Though the trade deal did address tech transfers, it did not mention national security. “That means the odds that the U.S. will lift sanctions on Chinese firms due to the deal are low,” Zhu said.