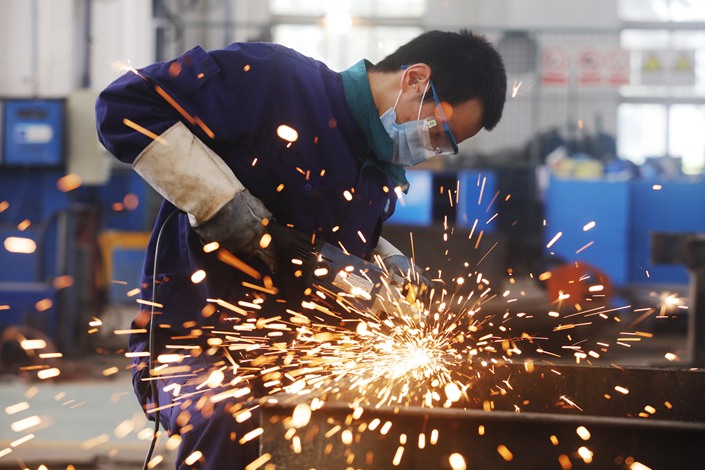 China’s major economic indicators showed modest signs of recovery in April from record lows earlier in the year as the country shook off the impact of the coronavirus epidemic and business activity picked up, official data showed Friday.

Fixed-asset investment declined at a much more moderate pace last month and industrial output bounced back into expansionary territory for the first time this year, reports released by the National Bureau of Statistics (NBS) show. Although retail sales continued to decline on a year-on-year basis, the pace of the drop was less than half that of March.

China’s economic growth was already slowing before the coronavirus outbreak started spreading across the country in January. But activity collapsed in February and early March as government efforts to contain the spread of the coronavirus shuttered businesses across the country. With the epidemic now largely under control inside the country, economic activity is recovering and domestic supply and demand are improving. But the country is now at risk of a second shock as overseas demand slumps and disruption to global supply chains hits production.

The government has repeatedly expressed its concern about the economic recovery and pledged to continue supporting companies struggling to resume normal business operations. Although policymakers have announced a raft of monetary and fiscal measures to aid the corporate sector and support low-income households, many economists expect further measures will be unveiled during the delayed annual meeting of the National People’s Congress (NPC), the country’s legislature, which starts on May 22. The gathering will also approve China’s main economic policies and targets for this year, including the goals for gross domestic product (GDP) growth and the budget deficit, which have yet to be formally announced.

In a statement (link in Chinese) on the data, the NBS said “China’s economic operation is gradually returning toward normalization. At the same time, it should also be noted that the current overseas epidemic is still spreading, and the stable recovery of the domestic economy still faces many challenges.”

Fixed-asset investment, a key driver of domestic demand that includes government-led infrastructure spending, fell 10.3% year-on-year (link in Chinese) in the first four months of 2020, NBS data show, broadly in line with the median estimate of a 10% drop from a Caixin survey (link in Chinese) of economists. The rate of decline narrowed from the 16.1% drop in the first quarter, and a record low 24.5% fall in the first two months. The NBS only releases cumulative figures for investment.

Infrastructure investment, which consists of spending on the construction of roads, railways and other public facilities, shrank 11.8% in the first four months, narrowing from a 19.7% decline in the first quarter. The decline in investment in real estate development moderated to 3.3% year-on-year (link in Chinese) in the first four months from a 7.7% drop in the January-to-March period, NBS data showed. The improvement reflected more significant policy support, economists with Oxford Economics said in a research note.

Value-added industrial output, which measures production by factories, mines and utilities, bounced back into expansionary territory for the first time this year with an increase of 3.9% year-on-year (link in Chinese) in April. That compares with a 1.1% year-on-year decline the previous month.

Retail sales, which include spending by households, governments and businesses, fell 7.5% year-on-year (link in Chinese) in April, an improvement on the 15.8% decline the previous month but steeper than the median forecast of a 5.9% drop in Caixin’s survey of economists.

The country’s surveyed urban unemployment rate rose to 6% (link in Chinese) in April, up 0.1 percentage points from the previous month, NBS data show. That’s the second-highest reading in available data going back to January 2017 and marginally below the record 6.2% rate reported for February 2020, according to NBS figures compiled by data provider CEIC. The surveyed rate in 31 major cities was 5.8% last month, up 0.1 percentage points from February and the highest since the data series began in June 2013, NBS said.

Economists at Goldman Sachs said that because the 6% unemployment rate is only 0.8 percentage points higher than the level before the pandemic started, it doesn’t reflect the full extent of labor market slack as it doesn’t capture migrant workers or the 18.3% of employed workers currently not working.

The number of migrant workers who have returned to work at the end of April has reached about 90% of the normal level in previous years, Liu Aihua, an NBS spokesman, said at a briefing Friday, but she acknowledged (link in Chinese) that the pressure on employment is still “relatively large, and there are still many difficulties in the production and operation of enterprises.” Overall, the economy has not yet returned to its normal level of activity, she said.

China’s economy shrank 6.8% year-on-year in the first three months of 2020, the first quarterly contraction since the data series began in 1992, as the coronavirus pandemic devastated manufacturing and consumption.

Liu from the NBS said the government is confident about an improvement in the second quarter, though the economy is still facing challenges from the ongoing pandemic. She reiterated the central government’s previous pledges of boosting domestic demand and employment to help the recovery.