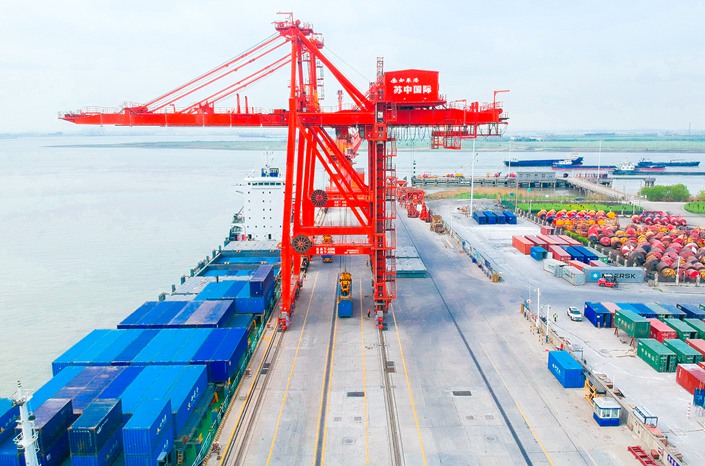 China’s goods exports unexpectedly rose in April, snapping a three-month decline, boosted by a surge in shipments of medical supplies to countries fighting the coronavirus pandemic, government data showed Thursday. But the slump in imports deepened, reflecting a decline in global commodity prices and weak demand from manufacturers for parts.

Exports grew 3.5% year-on-year to $200.3 billion last month, reversing a 6.6% drop in March, according to data (link in Chinese) released by the General Administration of Customs. The increase exceeded the median forecast for a 13.7% decline in a Caixin survey of economists (link in Chinese). Imports of goods plunged 14.2% year-on-year to $154.9 billion, far steeper than the 0.9% decline the previous month and worse than the median forecast for a 10% drop in the Caixin survey. The trade surplus widened to $45.3 billion in April from $13.1 billion in the same period last year.

China’s economy is recovering from the lockdowns earlier this year aimed at halting the spread of Covid-19, but demand from major trading partners including the U.S. and EU has slumped as governments moved to contain the virus, hitting jobs, consumption and economic activity. Premier Li Keqiang warned last month of the pressure on foreign trade and investment stemming from the pandemic and analysts have warned that the rebound in April exports is unlikely to last as global demand will remain weak at least in the short term.

“Although the decline narrowed in April, foreign trade is facing significant downward pressure,” Gao Feng, spokesman for the Ministry of Commerce, said at a regular briefing in Beijing on Thursday. “The spread of the (coronavirus) outbreak overseas has had a tremendous impact on the global economy and trade, increasing uncertainty and instability and posing unprecedented challenges to China’s foreign trade.”

Economists from Nomura International Ltd. in Hong Kong attributed the unexpected growth in exports in April to two main factors — companies clearing backlogs of orders that had built up during and after the domestic lockdown, and a surge in exports of antivirus medical supplies. Overseas shipments of medical supplies exports could have contributed 5 percentage points to overall export growth in April, based on preliminary figures from the customs administration, they wrote in a research note.

“Given the continued contraction of export orders in March and April — as suggested by the sharp drop in new export orders subindex of official and Caixin manufacturing PMIs (to 33.5 in April from 46.4 in March) — we do not think the improvement in April’s export growth is sustainable; rather, we expect export growth to drop significantly in May and June,” Nomura’s economists wrote.

The slump in imports in April may not be as bad as the headline figure suggests as it reflects a decline in the prices of some commodities, especially crude oil, which dropped sharply last month. Crude oil imports fell 51% in April year-on-year in value terms to $10.9 billion although by volume they fell just 7.5%, according to customs data.

“After taking into account the sharp decline in import prices, largely on account of tumbling energy prices, we estimate that import volumes fell 2.5% year-on-year after rising 8.9% year-on-year in March,” Louis Kuijs, head of Asia economics at research firm Oxford Economics Ltd., wrote in a note. “In the coming months we expect import momentum to remain modest as domestic demand recovers gradually. But imports should outperform exports as China continues its recovery while much of the rest of the world is falling into recession due to lockdowns.”

The outlook for exports is bleak. The export orders subindexes in the official manufacturing PMI and the private PMI survey sponsored by Caixin both showed a steeper contraction in April, suggesting little prospect of an improvement in actual exports over the short term. In addition, a survey of major exporters by the Ministry of Commerce showed many are facing order cancellations and delays, and are struggling to win new orders and ship goods to customers, Gao, the ministry’s spokesman told Thursday’s briefing.