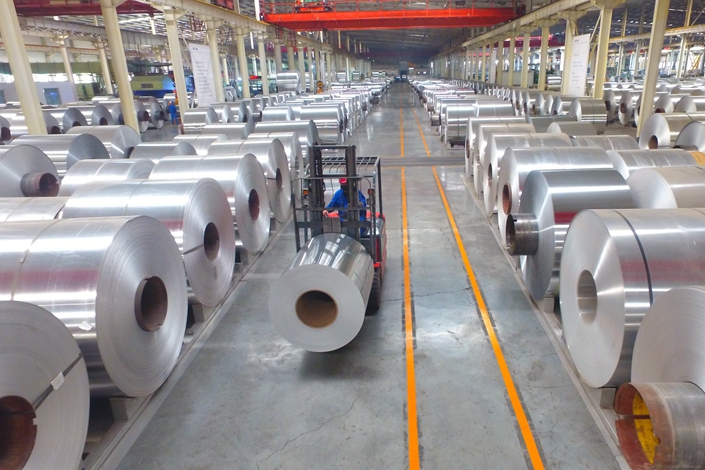 A worker transports a roll of aluminum on Feb. 22 in Liaocheng, East China’s Shandong province.

The recovery in China’s manufacturing sector in March appears to have been short lived with a Caixin-sponsored index of activity falling back into contractionary territory in April as the coronavirus pandemic continued to hurt both domestic and international demand.

The Caixin China General Manufacturing Purchasing Managers’ Index (PMI), which gives an independent snapshot of the country’s manufacturing sector, fell to 49.4 in April from 50.1 the previous month, a report released Thursday showed. A number above 50 indicates an expansion in activity, while a reading below that signals a contraction. In February, the reading fell to 40.3, the fastest contraction in the index’s 16-year history as the Chinese economy stalled amid the Covid-19 outbreak.

Although the domestic economy started to recover in March as the virus was brought under control, the rapid spread of the disease across other countries and regions disrupted international business and cratered global consumption, inflicting a further blow to Chinese companies. Although output continued to recover in April, export orders contracted for a fourth straight month and at a faster pace, with the reading at its weakest since December 2008 during the global financial crisis.

“[T]he sharp fall in export orders seriously hindered China’s economic recovery in April, although businesses were gradually getting back to work,” said Zhong Zhengsheng, director of macroeconomic analysis at CEBM Group, a subsidiary of Caixin Insight Group. The survey of around 500 manufacturing enterprises was conducted from April 7 to April 22.

“Amid the second shockwave from the pandemic, the problems of low business confidence, shrinking employment and large inventories of industrial raw materials became more serious. A package of macroeconomic policies, as suggested in the April 17 Politburo meeting, must be implemented urgently. It is particularly necessary to aid weak links including small and midsize enterprises and personal incomes,” Zhong said.

The Politburo, the Communist Party’s top decision-making body, pledged at its April 17 meeting (link in Chinese) to use stronger macro-economic policy tools to cushion the impact of the epidemic, implement a more proactive fiscal policy, raise the budget deficit, reduce interest rates and channel more funding to cash-strapped small and midsize enterprises.

Details of this year’s main economic policies and plans, including the target for growth in gross domestic product (GDP) and the budget deficit should have been announced in March during the annual meeting of the National People’s Congress (NPC). The gathering was postponed because of the coronavirus outbreak, but the standing committee of the NPC announced Wednesday that the meeting will take place in Beijing starting May 22. Approval of work reports from Premier Li Keqiang, the Ministry of Finance and the National Development and Reform Commission will give the formal go-ahead for the government to start implementing further policies to support the economy.

Many economists have called on the government to abandon the practice of setting a GDP target given the huge uncertainties facing both domestic and external demand as a result of the coronavirus pandemic.

The breakdown of the PMI components shows production recovered in April, with the output subindex expanding at a slightly faster pace than the previous month, when the gauge recovered from a collapse in February at the height of the epidemic.

However, in a sign that demand is still weak, total new orders placed with manufacturers contracted for the third month in a row in April and at a marginally faster pace than in March, which prompted firms to reduce the quantity of purchases. Meanwhile, stocks of finished goods continued to increase and the reduced workload led enterprises to further cut staffing levels, with the gauge of employment in April contracting for the fourth month in a row.

The index of future output expectations, which measures how optimistic or pessimistic manufacturers are about their production over the next 12 months, dropped to a four-month low despite remaining in positive territory. Zhong attributed the decline to manufacturers reassessing the impact of the pandemic and expecting the economic shock to be greater than previously thought.

China’s official manufacturing PMI, released (link in Chinese) by the National Bureau of Statistics (NBS) on Thursday, fell to 50.8 in April from 52 in the previous month. The official PMI polls a larger proportion of big companies and state-owned enterprises than the Caixin PMI, which is compiled by London-based data analytics firm IHS Markit Ltd.

The coronavirus outbreak and the measures taken by the government to stop its spread devastated China’s economy in the first quarter. GDP shrank 6.8% year-on-year in the January to March period, the first quarterly contraction since the data series began in 1992, figures from the NBS showed. The surveyed urban unemployment rate remained elevated in March from a year earlier, although it inched down to 5.9% from 6.2% the previous month.

To support the economy and help struggling businesses, the government has taken a series of measures including lowering borrowing costs, releasing billions of yuan of liquidity to encourage bank lending, cutting or waiving taxes and fees and offering preferential policies to businesses worst hit by the coronavirus outbreak. The State Council, China’s cabinet, is also stepping up measures to help the unemployed and low-income households. On April 21 it announced plans (link in Chinese) to expand coverage of unemployment insurance to migrant workers and provide some welfare benefits, including the minimum subsistence allowance, to all eligible families in both urban and rural areas. It also raised the floor on the proportion of investment capital that certain state-funded infrastructure projects can earmark for wages to 15% from 10%.