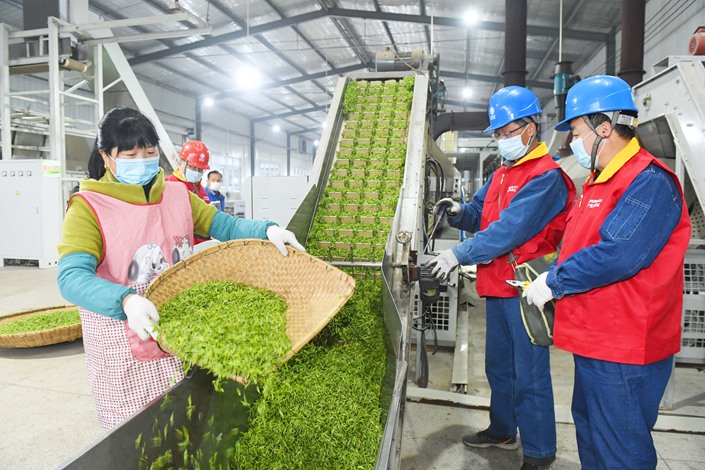 The Caixin China General Manufacturing Purchasing Managers’ Index (PMI), which gives an independent snapshot of the country’s manufacturing sector, rebounded to 50.1 in March from a record low of 40.3 the previous month. A number above 50 indicates an expansion in activity, while a reading below that signals a contraction.

As China’s coronavirus epidemic has been generally contained thanks to draconian control measures, policymakers have begun to focus on how to minimize the impact of the unprecedented disruption to the economy. Workers have been able to return to factories as travel restrictions have been gradually lifted, so manufacturers are resuming operations (link in Chinese), though they are still facing headwinds from sluggish demand and dislocated supply chains.

The level of manufacturing expansion in March was similar to that seen before the pandemic, said Zhong Zhengsheng, director of macroeconomic analysis with consultancy CEBM Group Ltd., a subsidiary of Caixin Insight Group.

However, some manufacturers have found they have no work to do as foreign orders have been canceled or delayed due to the global spread of the virus, which as of Tuesday had spread to some 200 countries and regions, with confirmed infections climbing past 800,000 and deaths exceeding 37,000. Important Chinese trading partners such as the U.S and many European countries are among the hardest hit areas.

Although the PMI’s output subindex saw a big rebound in March, the subindex for total new orders remained in contractionary territory, following the steepest drop on record in February. The gauge for new export orders remained below pre-pandemic levels.

Manufacturers’ inventories of purchased items continued to shrink, as businesses were reluctant to buy raw materials at a time when orders were scarce and travel restrictions were disrupting the movement of people and goods, said Zhong.

Employment remained under pressure as the data showed a further reduction in companies’ headcounts, though it declined at a slower rate than in February. The fall could be due to some employees voluntarily leaving their jobs as well as layoffs to cut costs, according to the survey.

Business confidence remained high for the next 12 months, as many firms were optimistic that demand will pick up once the pandemic eases. “The good news was that fundamental economic factors, such as business confidence and household income, did not deteriorate substantially,” Zhong said.

China’s official manufacturing PMI, released by the National Bureau of Statistics on Tuesday, rose to 52 in March from a record low of 35.7 the previous month.

The official PMI polls a larger proportion of big companies and state-owned enterprises than the Caixin PMI, which is sponsored by Caixin and compiled by London-based data analytics firm IHS Markit Ltd.

China’s policymakers are ramping up stimulus to offset the virus shock, including easing monetary policies, aiding small and midsize companies and boosting infrastructure funding. They have decided to raise the fiscal deficit-to-GDP ratio and issue special national debt to replenish the arsenal of bailout bullets.