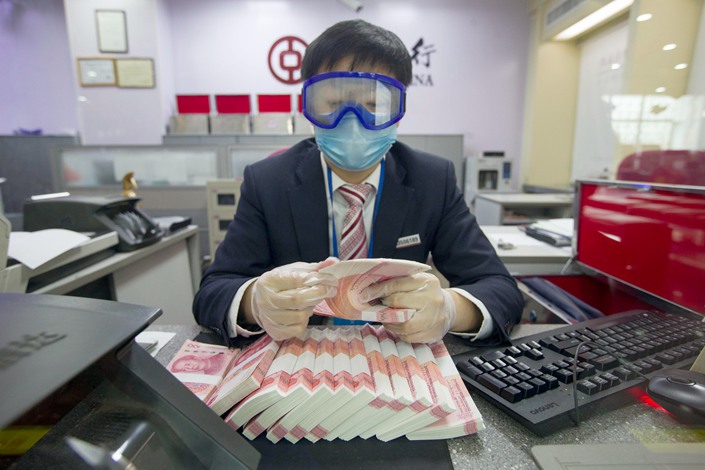 The proceeds from the special treasury bonds could be spent on infrastructure and on bailing out small and midsize companies, analysts said. Photo: People.VCG

China will sell special sovereign debt and run a higher fiscal deficit to stimulate an economy hobbled by global efforts to control the coronavirus outbreak, the country’s top leaders said.

The central government plans to roll out multiple economic policies and measures that include increasing the fiscal deficit as a share of GDP, issuing special treasury bonds, and increasing the scale of special bonds for local governments, according to a Politburo meeting on Friday, the official Xinhua News Agency reported.

Over the past 20 years, China has issued these bonds multiple times. From 1998 to 2000, it put out about 210 billion yuan ($29.6 billion) worth of long-term treasury bonds to support infrastructure construction, post-disaster reconstruction, technological transformation of state-owned enterprises and the development of western China.

As the economic damage of the outbreak continues to spread around the world, Chinese companies that have just gotten back to work may be hit by a decline in external demand and shortages of raw materials and intermediate goods. It has been widely anticipated that the government would issue special treasury bonds to hedge against the effects of the pandemic.

In early March, Liu Qiao, dean of Peking University’s Guanghua School of Management, suggested policymakers consider issuing about 2 trillion yuan worth of special treasury bonds if necessary. He pointed out that issuing these low-cost, long-maturity bonds is an ideal way to finance a fiscal budget deficit.

Robin Xing Ziqiang, chief China economist at Morgan Stanley, predicted that the value of the special treasury bond issuances will be over 2 trillion yuan — equivalent to 2% to 3% of GDP — and that they will mainly be used to bail out small and midsize enterprises, as well as individuals.

Lu Ting, chief China economist at Nomura International Ltd. in Hong Kong, estimated that the issuance value of special treasury bonds could be between 2 trillion yuan and 4 trillion yuan, equivalent to around 2% to 4% of GDP.

Yang Fan, an analyst at Citic Securities Co. Ltd., said that special treasury bond proceeds might end up mostly invested in infrastructure, and might also be used to support issuance of perpetual bonds by banks.