In Depth: China’s Financial War Against the Coronavirus 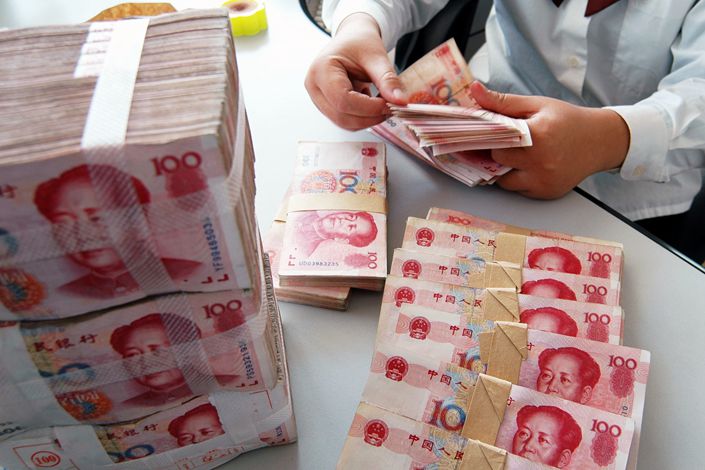 The outbreak has hit small firms especially hard, with most saying they are suffering a severe cash crunch that could put them out of business.

As the economic and social shockwaves from the coronavirus outbreak continue to spread across China, they are now engulfing the country’s small and midsized enterprises, with millions facing liquidity crises that could threaten their very survival.

The government’s efforts to contain the virus have included restricting the movement of hundreds of millions of people over the Lunar New Year holiday and ordering companies to delay reopening factories and offices. But the strain those measures has placed on companies is becoming increasingly evident –– the loss of production has caused ripple effects through domestic and global supply chains, with businesses unable to fulfill orders and many customers moving to find suppliers outside of China. A growing number of companies are suffering financial stress as their income dries up, making it difficult, if not impossible, to pay their bills.

The outbreak has hit small firms especially hard, with most saying they are suffering a severe cash crunch that could put them out of business. A joint survey (link in Chinese) of 995 small and midsize companies by Tsinghua University and Peking University found that 34% of respondents said they could only survive for one month on their current savings, one third said they could keep going for two months, and 17.9% said they could endure three months.

To alleviate these short-term cash flow challenges, financial authorities on Feb. 1 instructed (link in Chinese) lenders to roll over the loans of companies that have trouble repaying their debts as a result of the outbreak.

The authorities have also instructed banks to appropriately lower interest rates on loans and allow for reasonable delays in repayments for mortgages and credit card debt.

Pan Gongsheng, a deputy governor of the PBOC, said in an interview (link in Chinese) on Feb. 1 that the central bank will offer 300 billion yuan ($43 billion) in funding to both national and local banks in Hubei province, the epicenter of the coronavirus outbreak, to provide low-interest loans to certain companies.

The State Council, the cabinet, announced last week that it will cut lending rates and eliminate fees and taxes for companies that make or sell urgently needed medical supplies and daily necessities.

Some local authorities have made their own so-called whitelists of enterprises involved in fighting the outbreak and which are in need of capital and have told banks to be proactive in approaching enterprises directly to offer low-interest loans, a person at a joint-stock bank with knowledge of the matter told Caixin. Banks have also been required to simplify and speed up the approval process to grant credit to such companies, especially enterprises that produce protective masks, suits and coronavirus test kits, the source said.

But for non-medical companies that are struggling, the threat of higher debts and even closure still looms large.

“We’re not producing or shipping goods and we have no income,” the general manager of an auto-parts manufacturer in the eastern province of Shandong told Caixin. “We are hoping our bank will agree to allow us to delay interest repayments on our loans. If it doesn’t, we will have to borrow more money just to make the interest payments.”

As demand for medical supplies has surged, some manufacturers which recalled employees from their holidays to resume production urgently need working capital to finance their operations. Hospitals are also in dire need of cash to buy masks, clothing and other goods.

Banks to the rescue

One source from China Citic Bank Corp. told Caixin that its Wuhan branch lent 400 million yuan ($57 million) to a healthcare group in Hubei so that it could buy supplies for its three hospitals. “We approved the loan application on Feb. 2 and disbursed the funds on the same day,” the source said.

Financial institutions and investors are also being affected by the fallout from the coronavirus owing to restrictions on the movement of people and on companies reopening. On Jan. 25, the first day of the Lunar New Year, a client of the wealth management subsidiary of China Citic Bank in Hubei urgently needed to redeem a product to release money to buy medical supplies. The subsidiary had to summon 40 employees in charge of sales, operations, payments and internal controls, to set up a temporary group to work on the redemption and release the client’s money, Caixin has learned.

Banks’ schedules for new lending over the next few months could be disrupted by the coronavirus outbreak as many provinces imposed extended holidays on companies to prevent the spread of the virus. If the epidemic does not show any sign of reaching a turning point soon, new bank lending in the first quarter will probably shrink compared with the same period last year as credit issuance is delayed, several sources in the lending units of the country’s banks have told Caixin.

One official in the lending department at a bank in central China said that credit issuance was not just affected by demand from customers, but also by supply. In view of the need to prevent and control the epidemic, the opportunities for bank employees to go out and meet with customers and potential customers have declined significantly.

But many economists estimate that while the epidemic could influence the timing of new loan disbursements, it won’t have a significant effect on new lending for the whole year because credit issuance should bounce back. Li Yamin, a banking analyst with BOC International Holdings Ltd., estimates a recovery could begin as early as the second quarter.

Some bankers and analysts are concerned that measures announced by the government, while well-intentioned, may have some unwelcome consequences –– increasing financial risks in the banking sector and stoking the phenomenon of moral hazard.

The delayed resumption of work, the loss of production and the cash crunch now facing millions of small companies is raising the risks of a surge in overdue bank loans and defaults which could result in a jump in non-performing loans.

One senior executive of a financial institutions that focuses on serving small and micro companies told Caixin that the suddenness of the outbreak and the lack of any early warning system left many businesses unprepared and has brought markets to a standstill. “We will certainly give our full support to the various measures (introduced by the government) and roll them out,” he said.

“But at the end of the day, banks can only provide a short-term blood transfusion. Whether these companies can recover and resume operations as normal depends on their own hematopoietic mechanism,” he said, referring to the process of formation of the cellular components of blood.

In addition to the credit risks, concerns have emerged over the potential for moral hazard and unscrupulous behavior, with enterprises or individuals using the epidemic as a pretext for getting an extension of their loan repayment terms, creating arbitrage, or even evading bad debts.

One banker told Caixin said that lenders are conducting reviews of companies impacted by the epidemic, but these can only be done by video or photographic evidence because loan officers can’t carry out door-to-door visits in the current environment. These restrictions will give some companies or individuals the opportunity to falsify data and take advantage of policy loopholes, the banker said.

The authorities haven’t only been working to ease the strain on the real economy. They’ve also tried to reassure financial markets and head off volatility by loosening control over liquidity to prevent the interbank market, which oils the daily wheels of the financial system, from succumbing to a cash crunch as the virus hits confidence.

The PBOC usually withdraws liquidity from the interbank market after the Lunar New Year holiday, to mop up the money it injected before the festival to ensure people and companies had enough cash to spend. But in the first two days of trading after markets reopened on Feb. 3 following the extended public holiday, the central bank injected a net 550 billion yuan into the interbank market through reverse repurchase agreements, which involves the PBOC buying securities from banks temporarily, giving them more cash to lend out.

The central bank also lowered the interest rates on 7-day and 14-day reverse repurchase agreements by 10 basis points to cut the cost of funding for banks.

“If it were not for this epidemic, we wouldn’t have seen monetary policy conducted on such a large scale,” Sheng Songcheng, a former head of the Financial Survey and Statistics Department at the PBOC, told Caixin. “Because of the impact of the epidemic we can now say that the monetary policy stance is now prudent with a loosening bias.”

Sheng said the epidemic’s impact on the economy is more of a short-term shock (rather than having a long-term impact) and it won’t be fully reflected until at least March. The central bank still has plenty of room to adjust monetary policy and has a variety of tools at its disposal, Sheng said.