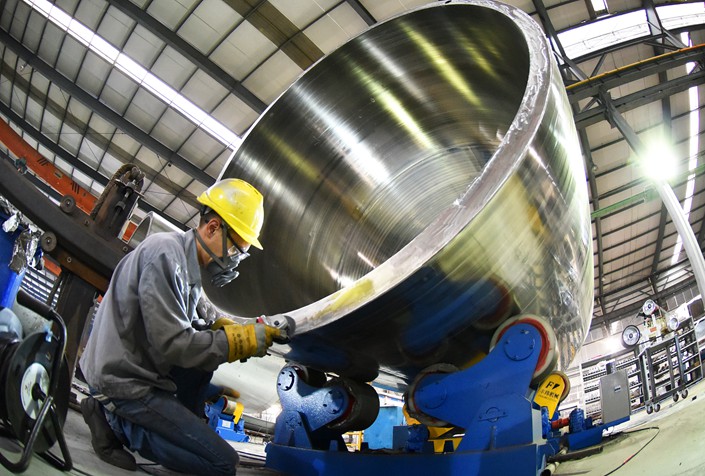 China’s economy continued its gradual recovery from the fallout of the Covid-19 pandemic in May, as major indicators released Monday showed investment, consumption and industrial output all improved from the previous month. But the recovery wasn’t as fast as economists expected, as the surveyed unemployment rate in big cities hit a record high.

More economic activity resumed last month as China brought its domestic outbreak under control. The economy also got a boost from government policies that expanded infrastructure investment and measures that offered relief to hard-hit businesses. The central government has unveiled a stimulus and relief package worth several trillion yuan to help economic growth stay on track.

But headwinds to the recovery lingered, with overseas demand remaining sluggish as the pandemic continued to spread around the world. Domestic demand recovered slowly amid high unemployment and worries about a second wave of Covid-19 infections in China. Last month, the surveyed urban unemployment rate in 31 major cities rose to 5.9%, its highest point since the data series began in June 2013. The country’s national surveyed urban unemployment rate remained high, despite slipping to 5.9% in May from 6% the previous month.

The recovery in May was mainly driven by an improvement in infrastructure investment, economists at Nomura International (Hong Kong) Ltd. wrote in a note. Infrastructure investment, which consists of spending on the construction of roads and railways and is generally led by the government, shrank 6.3% year-on-year in the first five months, narrowing from an 11.8% decline in the first four months, according to data (link in Chinese) from the National Bureau of Statistics (NBS).

Fixed-asset investment, a key driver of domestic demand that includes infrastructure spending, fell 6.3% year-on-year in the first five months of 2020, NBS data showed. That was slightly steeper than the median estimate of a 6% drop from a Caixin survey (link in Chinese) of economists. The decline slowed from a 10.3% drop over the first four months.

The decline in investment in real estate development (link in Chinese) also moderated to 0.3% year-on-year over the first five months from a 3.3% drop in the January-to-April period.

“Supply continued to outpace demand,” analysts at Macquarie Group Ltd. said in a note. Value-added industrial output, which measures production by factories, mines and utilities, grew 4.4% year-on-year (link in Chinese) in May, up from 3.9% growth the previous month. The reading was lower than the median forecast for a 5% rise in the Caixin survey. Retail sales, which include spending by households, governments and businesses, fell 2.8% year-on-year (link in Chinese) last month, an improvement on the 7.5% decline in April, but steeper than the median forecast for a 2% drop in the Caixin survey.

“The May activity data indicates that the economy is on a recovery path, following the plunge in Q1,” Louis Kuijs, head of Asia economics at research firm Oxford Economics Ltd., wrote in a note.

He believed China’s economic recovery will continue under governments’ policy support and planned to raise the forecast for China’s GDP growth for 2020 to between 2% and 2.5%, from the current 0.8%.

But Nomura economists were less optimistic. “China’s export growth could worsen further despite the surge in medical product exports. The pent-up demand may not be sustainable, while the strength of catch-up production amid the easing of lockdown measures should also prove unsustainable,” they said. Exports fell 3.3% in dollar terms from a year earlier in May, while imports plunged 16.7%.