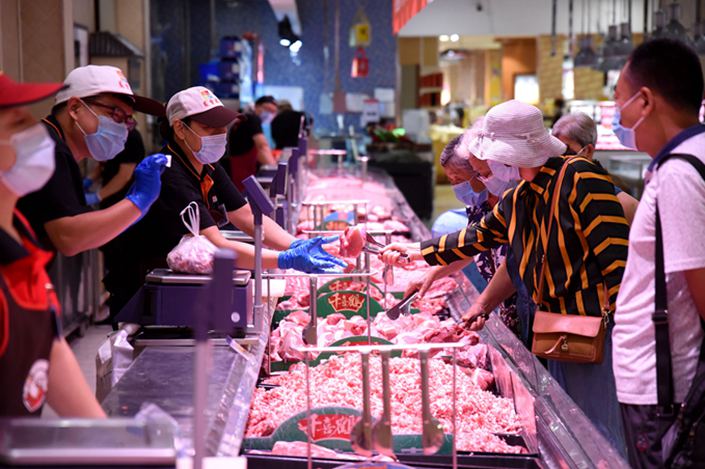 China’s consumer inflation eased to a 14-month low in May, dragged down by moderating gains in pork and food costs, while the decline in prices at the factory gate deepened to a four-year low as oil prices slumped, official data showed Wednesday.

The consumer price index (CPI), which measures the prices of a basket of consumer goods and services, rose 2.4% year-on-year, the fourth straight monthly decline and down from a 3.3% pace in April, data (link in Chinese) from the National Bureau of Statistics (NBS) showed. The reading was slightly lower than the median estimate of 2.5% in a Caixin survey (link in Chinese) of economists.

The producer price index (PPI), which gauges changes in the prices of goods circulated among manufacturers and mining companies, fell 3.7% (link in Chinese) year-on-year last month, steeper than the 3.1% drop in April and the median estimate of a 3.3% decline in the Caixin survey. Prices in the oil and gas extraction industry fell by 57.6% year-on-year, while prices in the petroleum, coal and other fuel processing industries fell by 24.4%, both steeper than the declines seen in April.

The data indicate subdued demand in the world’s second-biggest economy as it continues to recover from the impact of the Covid-19 epidemic, with nonfood inflation rising by just 0.4% year-on-year in May, the same pace as in April which was the lowest since December 2009. The lack of inflationary pressure may make it easier for the central bank to lower interest rates to help stimulate demand.

“We believe falling CPI inflation and continued PPI deflation will provide Beijing with more space to implement policy stimulus to offset the impact of Covid-19 on the economy,” economists at Nomura International (Hong Kong) Ltd. wrote in a report. “The larger-than-expected drop in inflation could also alleviate some recent fears in the bond markets,” they said.

China’s bond market has fallen sharply since the start of May due to various factors including signs of tightening monetary policy.

Food costs continue to exert the biggest impact on consumer inflation. Pork prices, one of the key drivers of inflation over the past year, rose 81.7% year-on-year in May, the third consecutive monthly moderation and down from 96.9% growth the previous month. The NBS said pork prices accounted for 1.98 percentage points of the overall increase in the CPI.

Core CPI — which excludes more-volatile food and energy prices and which economists say better reflects long-term inflation trends — rose 1.1% last month, unchanged from April, and down from a 1.6% pace in May last year.

“[F]ood price inflation will probably decline further during the remainder of the year, as pork prices drop back on more ample supply,” Julian Evans-Pritchard, an economist with London-based Capital Economics, wrote in a note. “This should continue to drag down headline consumer price inflation. But core inflation should bottom out before long as labour market slack diminishes and consumer spending strengthens.”

The price of West Texas Intermediate crude oil, one of the benchmark international oil prices, collapsed from around $53 in February to just over $11 in April before starting to recover. The impact of the slump on the overall PPI has masked narrowing deflation in other raw material sectors such as nonferrous metals smelting. Month-on-month PPI is also showing an improvement, with the decline in the index narrowing to 0.4% in May from 1.3% the previous month and the highest reading since January, suggesting industrial demand is picking up as the economy recovers from the Covid-19 epidemic.

The latest Caixin China Manufacturing PMI showed activity rebounding in May, with the index rising to 50.7, the highest reading in four months.