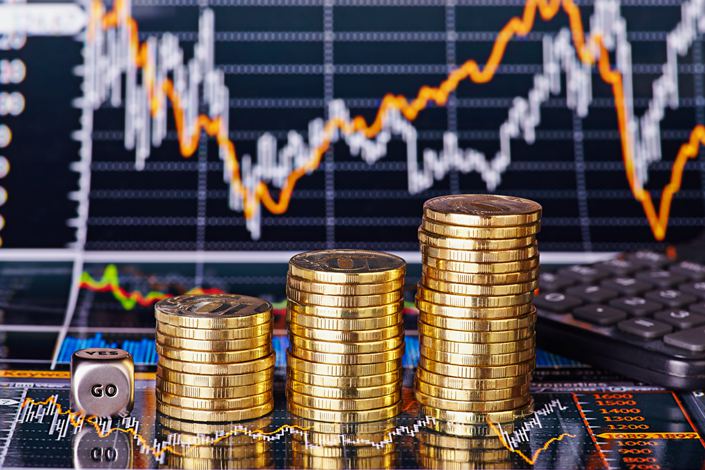 Yields on corporate, government and quasi-government bonds have surged over the past month as investors’ expectations of lower interest rates faded.

China’s corporate debt market is in a funk.

On Monday alone, at least two companies cancelled debt issuances worth a combined 1.5 billion yuan ($213 million), citing market volatility. In the first week of June, planned sales of 17 bonds with a combined value of 35.5 billion yuan were either scrapped or postponed, the second straight weekly jump, data from Wind Information Co. Ltd. show. Over the same period, the amount of money raised by companies from domestic bond sales fell to 122 billion yuan, the least since February and down almost 64% from the previous week, data compiled by Bloomberg show.

The world’s second-largest bond market is being buffeted by a mélange of factors that are curbing the appetite of both sellers and buyers. Many companies are being forced to offer higher-than-anticipated interest rates as rising yields on government bonds have fed through into the corporate market, and many are reluctant to increase their debt costs.

For their part, investors have become more reluctant to buy company bonds for a range of reasons. Issuance of debt by the Ministry of Finance, which is treated as risk-free, is surging this year as the state boosts spending to support the economy and that’s prompting many investors to opt for safer government bonds and to demand higher yields to buy corporate bonds.

Hopes for more monetary easing have faded as the central bank is sticking to its guns and refraining from cutting interest rates in the interbank market. That’s affected the cost of money for institutions and investors and to maintain their profit margins they are seeking higher yields on corporate bonds. Fear that bond prices will continue to drop is also making investors cautious and holding off purchases in anticipation of further declines.

On top of that, analysts say, expectations that China’s economy will continue to recover from the coronavirus pandemic has boosted investors’ risk appetite, driving money into higher-risk markets such as stocks, which is bad news for the bonds.

The bond cancellations show “the market has become jittery,” fixed-income analysts at China Merchants Securities Co. Ltd. wrote in a report. Opportunities for issuers to dip their toe in the water are diminishing, and it’s become increasingly difficult to roll over short-term debt, they wrote.

“Bond yields in the secondary market are rising and prices just fall as soon as investors buy bonds, which has weakened demand,” one bond underwriter at a brokerage firm told Caixin. “Issuers are also hesitant and everyone is playing wait-and-see.”

Yields on corporate, government and quasi-government bonds have surged over the past month as investors’ expectations of lower interest rates faded. The yield on the benchmark 10-year Chinese government bond (CGB) was 2.83% on Tuesday, up from 2.55% at the beginning of May and just off its highest since February, according to data from China Central Depository & Clearing Co. Ltd., a state-backed agency that provides registration, depository and settlement services. One-year CGB have seen an even greater surge, rising to 2.09% from 1.16% over the same period.

China Merchants Securities’ analysts said uncertainty about how long market volatility will persist and how high yields could go is making it more difficult for companies and their advisers to decide on coupon rates on their proposed bonds. As a result, they are opting to stay on the sidelines.

The latest drag on the bond market is a new measure by the People’s Bank of China (PBOC) that involves setting up a special purpose vehicle (SPV) to channel as much as 440 billion yuan of funds to regional banks for them to provide new loans or roll over maturing loans to small businesses. This has allowed the central bank to provide credit to companies directly, bypassing the need to inject liquidity into the financial system through the interbank market, which is where much of money for bond purchases comes from.

“The task of stabilizing economic growth is urgent, so central banks can no longer wait for commercial banks to lend but need to extend credit directly to the real economy through various innovations,” Jiang Chao, an analyst with Haitong Securities said in a note.

The central bank’s measures are bad news for the bond market and prices will keep falling in the short term, Chen Li, an analyst with China Chuancai Securities Co. Ltd. wrote in a Caixin article (link in Chinese).

Some analysts also point to the possibility that policymakers may tighten monetary policy given the abundant liquidity in financial markets and amid growing concerns about interest-rate arbitrage, where companies sell bonds at a relatively low interest rate and use the proceeds to invest in financial products that offer higher returns, making a profit on the interest differential.

The PBOC last month defied market expectations that it would lower interest rates on two instruments it uses to control the money supply – the one-year medium-term lending facility (MLF) and the seven-day reverse repurchase agreement. The rate on the MLF was left unchanged on May 15 at 2.95% while the rate on the reverse repos, which was last reduced in February, stayed at 2.2%. The PBOC’s lack of action sent interest rates in the country’s money markets higher as expectations for further cuts in the cost of borrowing gave way to speculation the central bank is shifting to tightening mode.