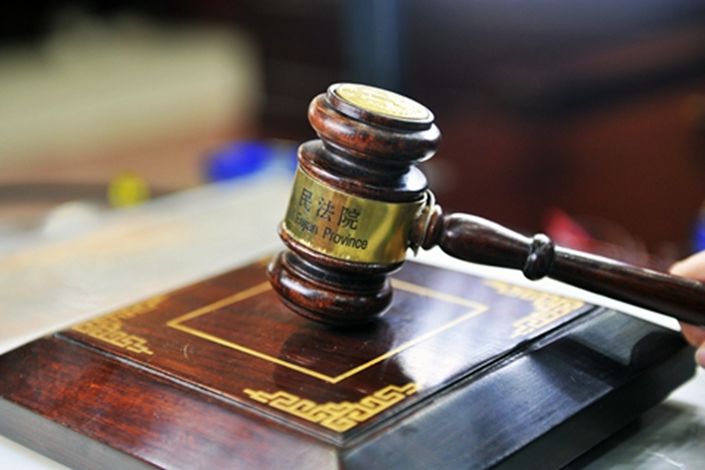 Although the verdict released following Li’s sentencing does not explicitly name his benefactors, in many cases their identities can be inferred through their surnames and official job titles.

A court in China has struck down an appeal by a former journalist demanding that the government publish the names of officials who bribed a city’s top police officer.

Li Changgen, the former public security chief of Xinyang in Central China’s Henan province, was sentenced to 10 years in prison in 2016 for accepting bribes worth about $900,000 in return for official promotions and other favors.

The written verdict included details of the payments and other gifts Li received over a period of at least seven years, but obscured the names of the individuals who bribed him, many of whom are believed to remain in high-ranking positions. Former journalist He Guangwei launched a lengthy court battle last year demanding that authorities disclose more details of their identities.

On Thursday, the Xinyang Intermediate People’s Court rejected He’s demand on the grounds that the city’s police department had kept no records of the bribes and therefore could not make them available to the public.

The two cases provide a snapshot of China’s entrenched corruption networks and the barriers citizens face in unmasking those who facilitate graft.

Li, 62, was a career police officer who from 2006 served as Xinyang’s public security chief and deputy mayor. He was also the secretary of the 6 million-strong city’s political and legal affairs commission, the Communist Party’s law enforcement watchdog.

Court records show Li’s ascent unleashed a torrent of kickbacks from local officials seeking to burnish their own careers. Between 2007 and 2014, he received cash payments totaling more than $780,000, according to Caixin calculations based on information in the court verdict.

Over the same period, Li also accepted gifts including fine art and expensive watches, valued at about $120,000 overall.

In return, he helped dozens of people secure lucrative jobs in government or the public sector, the verdict showed.

In one instance, Li solicited the equivalent of $150,000 in yuan, euros and American dollars over six years from a person with the same surname. He then helped his eponymous donor win a succession of promotions taking him from the deputy chief of a local police bureau to membership of an influential political committee in a county-level force.

Although the verdict released following Li’s sentencing does not explicitly name his benefactors, in many cases their identities can be inferred through their surnames and official job titles.

In this way, He, a former staff member at the Chinese finance magazine Time Weekly who now works for a private company in the southern city of Shantou, allegedly identified 19 current and former police, government and Communist Party officials who benefitted from Li’s patronage.

In April 2019, He made a freedom of information request to Xinyang’s public security bureau asking for the full names of those who had paid bribes to Li. He was rebuffed on the grounds that the details he sought were not included in government records.

In response, He sued the bureau, demanding that it make public the names of all of Li’s benefactors included in the verdict as well as the legal basis for retaining Xinyang police staff who had previously paid bribes to the disgraced cop.

When a municipal district court rejected He’s request in December, he appealed the ruling at the higher-ranked Xinyang Intermediary People’s Court. His attorneys argued the first case had been marred by serious procedural violations and the appointment of a judge with dubious credentials.

But the intermediary court ruled Thursday that the original verdict was fair, saying that because Xinyang police did not conduct the corruption investigation, “they did not produce or keep any information relating to Li’s bribe-taking.”

Thus, details of who paid the bribes “do not belong to the category of information to be disclosed by the government,” the court said.

Since 2016, Xinyang’s discipline inspection committee has not publicly announced any action against the individuals who paid bribes to Li, according to a search of official documents on its website.

But in May last year, the deputy director of the city’s publicity department said in an interview with current affairs magazine China Newsweek that 31 officials had been disciplined in various ways for paying bribes.

China’s President Xi Jinping has spearheaded a wide-ranging anticorruption campaign since coming to power in 2012, prosecuting more than 1.5 million mostly local and provincial Communist Party officials in a bid to stamp out graft and boost trust in the government.