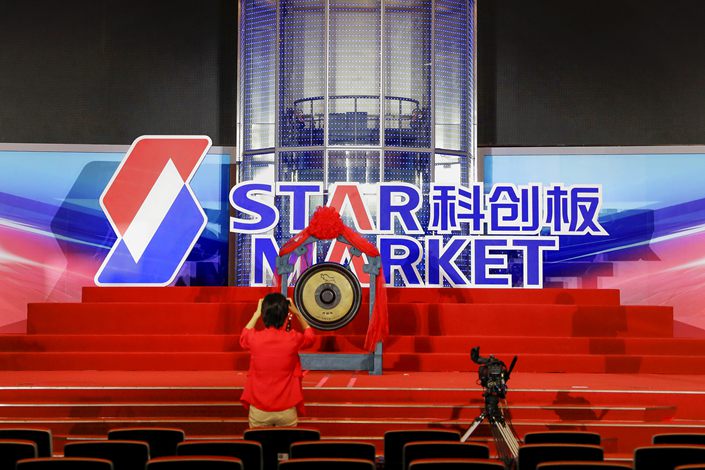 Over the long haul, success of China's STAR Market will depend less on blockbuster listings and more on its long-term performance.

The excitement surrounding the spate of recent listings on the STAR Market — “Shanghai’s Nasdaq” — is understandable. The STAR Market’s one-year anniversary marks a cause for celebration. For it brings into existence what had been up to this point a missing cog in China’s capital markets — a contender that can lure a greater number of high-growth domestic companies away from overseas exchanges. But the amped-up fervor generated by stock performance and lofty valuations, for still budding firms yet to prove themselves, should give one a moment of pause.

Is the fuss over the STAR Market warranted? There are a number of drivers fueling excitement that should continue, at least in the short-term. First is the novelty of it all in having reached its first anniversary. Creation of the STAR Market is a vital component of a dynamic, national capital market that can cultivate startups that bolster the real economy. While China’s banking industry is a juggernaut, its capital markets have yet to pull their own weight. This takes on all the more significance given American investors’ waning appetite for Chinese IPOs in the wake of the Luckin Coffee Inc. debacle and tumultuous exchanges between Beijing and Washington that may lead to a cutoff of America’s exchanges.

A second factor is the relentless pace of deal making and fund-raising activity, aided by high-profile IPOs including Semiconductor Manufacturing Industry Corporation – a homecoming listing for Chinese firms opting to float shares back home. The STAR Market is second only to Nasdaq in proceeds, raising $14 billion versus $18 billion and double the New York Stock Exchange and Shanghai’s main board. Overall, in the year since inception, the fledgling market has listed 130 firms valued at about $400 billion. The STAR Market acts a much-needed off ramp for angel investors, venture capital firms and private equity outfits looking to cash out some of their winnings and then recycle part of that capital to fund the next class of IPO hopefuls.

Moreover, the STAR Market is in line with Beijing’s Made in China 2025 industrial roadmap that calls for self-reliance in a number of strategic sectors including semiconductors, biotechnology, high-tech manufacturing and artificial intelligence. As part of the national strategy, the board is an essential liquidity venue that allocates capital to cash hungry firms looking to commercialize next generation technologies, as a stepping stone to self-sufficiency in government-favored sectors.

Enabling this vast undertaking are widely-anticipated structural reforms in the way IPOs are approved. Previously, regulators shackled firms with stringent listing requirements, leaving them with little recourse but to flock overseas for a stock offering. Prior to the STAR Market’s debut, the China Securities Regulatory Commission’s (CSRC) wide-sweeping remit over the financial industry included IPO approvals. The CSRC’s application-based system, cumbersome and lengthy, scrutinized companies over many months and created a backlog of firms itching to debut. However, the recently implemented registration-based system fast-tracks approvals through a simplified listing mechanism largely overseen by the exchange. This streamlined process enables firms to come to market at an accelerated pace, providing a steady flow of deals waiting to be gobbled up by institutional and retail investors.

Can the euphoria continue? Several short-term developments may provide the STAR Market with an additional boost. Ant Group’s eagerly anticipated dual listing on both the STAR Market and Hong Kong Stock Exchange provides a seal of approval for the debutante market by Alibaba Group Holding Ltd., one of China’s most highly regarded and internationally visible firms. Ant Group’s desired valuation north of $200 billion has investors gushing with confidence that the market rally will continue, and they are waiting in anticipation for other high-profile offerings.

Given the STAR Market’s early razzle-dazzle, some institutions are mulling the development of index-based investment products that track the STAR’s Market 50 Index. Exchange-traded funds (ETFs) that cater to passive investment styles would enable wider adoption of ETFs and can expand market participation to other investors currently not able to directly invest in STAR’s equities. In time, if these ETF products take off, it may even begin to shape investor behavior, popularizing passive investing among legions of retail investors that today seek alpha via active investment styles.

STAR Market’s early success has not escaped the attention of discerning international investors. Through the end of this year’s first quarter, foreign backers held shares in more than 15 STAR Market-listed firms via the qualified foreign institutional (QFII) program. Chatter among overseas asset managers indicates a desire for further participation via existing conduits such as the Hong Kong-Shanghai Stock Connect.

The STAR Market’s resilience in hitting new highs stands in stark contrast to the reality of geopolitical tensions and Covid-19 fallout. But amid the enthusiasm there are signs for caution, as some investors are starting to draw parallels to the bull market run-up and stunning collapse in 2015.

For one, the STAR Market’s trading volume has increased by 400% through July and stocks are trading at 100 times earnings, higher than peers in Hong Kong, Shanghai’s main board or the Nasdaq. Most companies on the STAR Market have yet to experience a prolonged economic malaise. The next economic slump will shake down some of these high flyers and separate the pretenders from the contenders. China’s manufacturing production has resumed, but economic uncertainty over long-term prospects is still holding back consumer discretionary spending. The market’s future expectations are not in synch with a deteriorating global macroeconomic outlook.

Then there is the insatiable demand for new listings by retail investors, who are prone to making rash decisions amid a sea of frenetic buying and selling. Lending by brokerage firms to buy shares is over 1.2 trillion yuan ($172.6 billion), its highest level since 2015, according to Bloomberg data. This, even after regulators have clamped down on more than 250 illegal margin lending platforms to let some of the steam out of a runaway bull market.

In a tech savvy nation like China, it is easy for illegal margin financing companies to sprout, take hold and peddle their wares via mobile phone apps and social media to unsuspecting and oftentimes novice investors. Regrettably, such a pitch resonates with individuals who are more likely to be swayed by a well-spun yarn than sound fundamentals. Backing next-generation technologies requires a grasp of technical subject matter that most retail investors don’t possess and careful due diligence that many don’t perform. Many are momentum investors chasing the next market rally.

The excitement surrounding the first-year performance of the STAR Market is certainly understandable and justifiable to a point. Over the long haul, the board’s success will depend less on blockbuster listings and first day price moves and more on its performance over the long-run. Ultimately, the STAR Market’s legacy will be scripted by its ability to help companies grow and meet their capital requirements, while improving liquidity and transparency, and providing access to a broader investor base.